This November was supposed to be a bloodbath for Senate Democrats. With ten of the party’s incumbents staring down tough reelection bids in pro-Trump states — including conservative bastions Montana, Missouri, West Virginia, North Dakota, and Indiana — the question wasn’t whether Republicans would retain control of the upper chamber, but exactly how much larger Mitch McConnell’s majority would grow.

Then, the president spent his first 15 months in office doing just about everything in his power to mobilize the Democratic base and harden the opposition of his skeptics; congressional Republicans decided to make taking health-care benefits from working families and giving tax breaks to the rich their top two legislative priorities; conservative voters in Alabama nominated an ephebophilic theocrat to be their standard-bearer; Bob Corker decided to take his tax-cut money and run; and Missouri’s governor decided to bring his party’s reputation down with him.

And now, Chuck Schumer is dreaming the impossible dream: Thanks to Doug Jones’s victory in Alabama, Democrats need to net just two seats this fall to take Senate control — and thereby, stave off another two years of Trump packing the judiciary with Federalist Society fanatics. New polling from Axios suggests that ambition is within reach, as the party’s candidates in Arizona, Tennessee, and Nevada are all in position to remove seats from Mitch McConnell’s column. 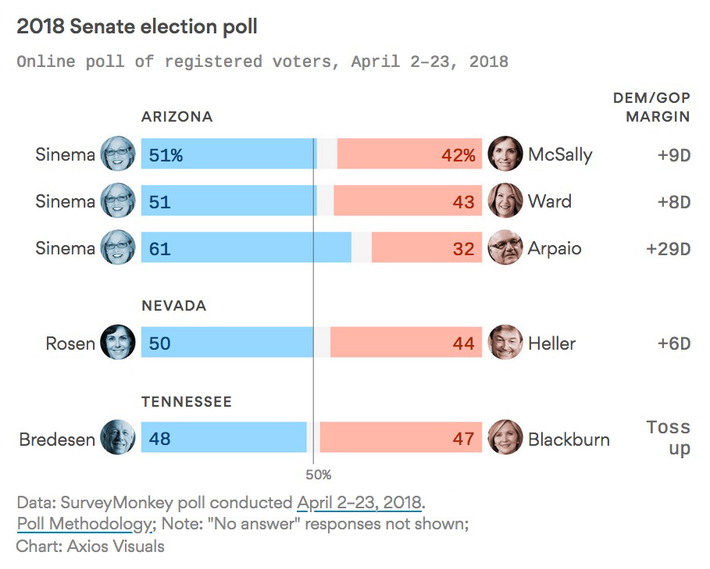 Tennessee is obviously the biggest reach for Team Blue. But with the state’s popular former governor Phil Bredesen as its standard-bearer, Democrats have a real shot at regaining a foothold in the Volunteer State. Meanwhile, Sinema’s early strength could prove particularly significant. With John McCain still sidelined by brain cancer, there’s a good chance that two Senate seats might be up for grabs in Arizona this fall. Sinema’s polling advantage — combined with Democrats’ strong showing in a high-turnout special election earlier this week — suggests that the party could theoretically mine all the pickups it needs from the Grand Canyon State.

Meanwhile, a Quinnipiac poll released this week shows progressive Democrat Beto O’Rourke trailing Ted Cruz just by 3 percent in Texas. O’Rourke has proven himself a superlative fundraiser, notching an eye-popping $6.7 million in campaign donations over the first quarter of this year.

The stakes of Senate control aren’t lost on big-dollar conservative donors. They know a Democratic sweep this fall could get Trump’s next Supreme Court nominee Merrick Garland-ed. And if retaining the House starts to look like a lost cause, the GOP donor class will be able to concentrate its considerable resources on reminding conservative voters in deep-red battlegrounds that control of the high court is on the ballot this autumn.

THE FEED
21 mins ago
tomorrow
tomorrow
Weathering the Weather
By Bridget Read
Mental-health professionals are trying to figure out how to talk about the climate.
6:00 a.m.
the inside game
the inside game
Polling in America Is Still Broken. So Who Is Really Winning in Virginia?
By Gabriel Debenedetti
The polls were disastrously wrong in 2020. That has political insiders extra nervous about a pivotal state election.
10/27/2021
abortion
abortion
Gun Guy Mark McCloskey Wants to Ban Abortions for Victims of Incestuous Rape
By Ed Kilgore
The GOP Senate hopeful who pointed guns at protestors wants to run wild with abortion policy in Missouri, the home of Todd “Legitimate Rape” Akin.

10/27/2021
ransomware
ransomware
Russian Cybercriminals Claim to Have Hacked the NRA
By Matt Stieb
More trouble for the troubled guns-rights group.
10/27/2021
the future
the future
Lessons in Tending Your Metaverse
By Choire Sicha
What Facebook could learn from Reddit.
10/27/2021
virginia governor's race
virginia governor's race
If McAuliffe Loses to Youngkin, Don’t Blame Princess Blanding
By Ed Kilgore
Major-party supporters have a bad habit of blaming close losses on “spoilers” like Blanding, who represent distinct and legitimate points of view.
10/27/2021
facebook
facebook
What Is Being Leaked in the Facebook Papers?
By Chas Danner
A guide to the newly reported revelations from a trove of internal company documents shared by a company whistleblower.
10/27/2021
the facebook papers
the facebook papers
The Facebook Leaks Have Caught the FTC’s Attention
By Benjamin Hart
The agency is reportedly investigating whether leaked files prove Mark Zuckerberg & Co. misled consumers.
10/27/2021
covid-19
covid-19
Where Are All the At-Home COVID Tests?
By Margaret Hartmann
Here’s why rapid antigen tests are still scarce weeks after Biden promised to boost at-home testing, and when they’ll finally be widely available.
10/27/2021
the economy
the economy
Bidenomics Is Working
By Eric Levitz
Even though voters think otherwise.
10/27/2021
encounter
encounter
Lina Khan Isn’t Worried About Going Too Far
By Nancy Scola
The FTC’s very young new boss thinks corporations such as Facebook are abusing their power. To fight them, she’s consolidating some clout of her own.
10/27/2021
the facebook papers
the facebook papers
‘The Problem Is Him’
By James D. Walsh
Kara Swisher on Mark Zuckerberg’s crisis and ours.
10/26/2021
nyc mayoral race
nyc mayoral race
Key Moments From the Second New York City Mayoral Debate
By Nia Prater
Sliwa yelled at Adams, Adams ignored Sliwa, and both insulted de Blasio in the final contest of the 2021 mayoral race.
10/26/2021
brazil
brazil
Bolsonaro Accused of Crimes Against Humanity Over COVID Response
By Matt Stieb
A report conducted by a Brazilian Senate panel found that Bolsonaro’s pandemic response was criminally negligent.
10/26/2021
coronavirus vaccines
coronavirus vaccines
The U.S. Is One Step Closer to Pfizer Vaccines for Kids
By Matt Stieb
An FDA advisory panel approved a lower dose of the Pfizer candidate for kids ages 5 to 11.
10/26/2021
capitol riot
capitol riot
Marjorie Taylor Greene and the Right’s Creeping Embrace of Revolution
By Ed Kilgore
It’s easy to dismiss her as making yet another extremist statement likening January 6 to 1776. She is far from alone, though.
10/26/2021
pivot
pivot
Why Zuckerberg’s Days As CEO May Be Numbered
By Intelligencer Staff
As damning information about the company keeps trickling out, something has to give.
10/26/2021
the national interest
the national interest
How the Right-Wing Supreme Court Can Save Biden’s Economic Plan
By Jonathan Chait
Conservative judicial activism to the rescue!
10/26/2021
kyrie irving
kyrie irving
The Nets Really Don’t Want This
By Zak Cheney-Rice
The team’s best-laid plans are no match for one stubborn anti-vaxxer.
10/26/2021
politics
politics
The NYPD is the Latest Police Force to Fight Vaccine Mandates
By Nia Prater
The city’s biggest police union is suing.
10/26/2021
games
games
The Aggrieved World Series
By Will Leitch
The Astros and Braves both have fan bases defined by resentment — a perfect fit for 2021.
10/26/2021
the facebook papers
the facebook papers
No Amount of Whistleblowing Can Fix Facebook
By Jacob Silverman
We know the problem with Facebook. The real question is what to do about it.
10/26/2021
the national interest
the national interest
Glenn Youngkin’s Closing Message: Ban Toni Morrison From Schools
By Jonathan Chait
Virginia Republican wants the angriest parents to have a veto on school curriculum.
10/26/2021
republicans
republicans
A Short History of Conservative Trolling
By Rick Perlstein
On the laughing emptiness at the center of the Republican Party.
10/26/2021
business
business
The Soft Sell of Hims
By Jesse Barron
Can the health-care brand leverage young men’s anxiety over erections and hair loss into a multibillion-dollar empire?