But the president and his party weren’t content with keeping the economy “good still” — they wanted to make it “great again.” And so, eight years after Paul Ryan railed against fiscal stimulus at the onset of a recession, the House Speaker called on Congress to pass $1.5 trillion in deficit-financed tax cuts near the peak of expansion. After all, while unemployment was low, wage growth remained lackluster. Americans were in desperate need of raise, Republicans reasoned, and the best way to give them one would be to turbocharge the economy— by shoveling many billions of dollars into the coffers of corporate shareholders and pass-through business owners.

There was never any basis for believing that this was an efficient way to boost wages for the working poor (as Ryan suggested in a chutzpah-packed Wall Street Journal op-ed). But it was nevertheless plausible that adding hundreds of billions of dollars to an already robust economy just might kick it into a whole new gear. And that premise became a bit more plausible after the February jobs report showed that payrolls had expanded by an unexpectedly high 313,000 — while the labor-force-participation rate had registered its largest month-to-month increase in nearly eight years. Sure, wage growth was still unremarkable; but if February’s developments represented the “new normal” for job growth in the United States, it would only be a matter of time until paychecks started swelling.

Alas, it now appears that February was not the beginning of a new normal for the U.S. economy, so much as a fleeting departure from the old one: According to the Labor Department’s newly released report, the American economy added only 103,000 jobs in March, while labor force contracted by 158,000, and unemployment held steady at 4.1 percent. Wages did actually tick up a hair last month, but still remain far below what economists would expect this far into an expansion.

All that said, it’s important remember that our economy’s “old normal” is the longest streak of uninterrupted job growth on record. It has now been 90 months since a jobs report showed America shrinking its payrolls. March’s headline figure might be low, but that likely reflects a combination of bad weather and regression toward the mean than any deep weakness in the recovery. February’s number was likely inflated by unseasonably warm weather; March’s depressed, by aberrantly heavy snowfall.

The big picture: So far this year, the U.S. has added an average of 202,000 jobs a month — enough to have kept unemployment steady, even as long-discouraged workers came back in off the sidelines. And from a progressive perspective, that last development is huge. The tight labor market hasn’t yet forced employers to increase wages substantially, but it has spurred them to take a chance on workers who’d previously been locked out of the labor market. Over the past four years, unemployment among workers who lack high-school diplomas has fallen sharply; Americans with criminal records have had an easier time gaining a foothold in the job market; and the number of Americans who’ve left the labor force due to a disability has seen its sharpest decline in a quarter-century — a development that suggests it’s becoming easier for workers with medical problems to find job opportunities compatible with their disabilities. 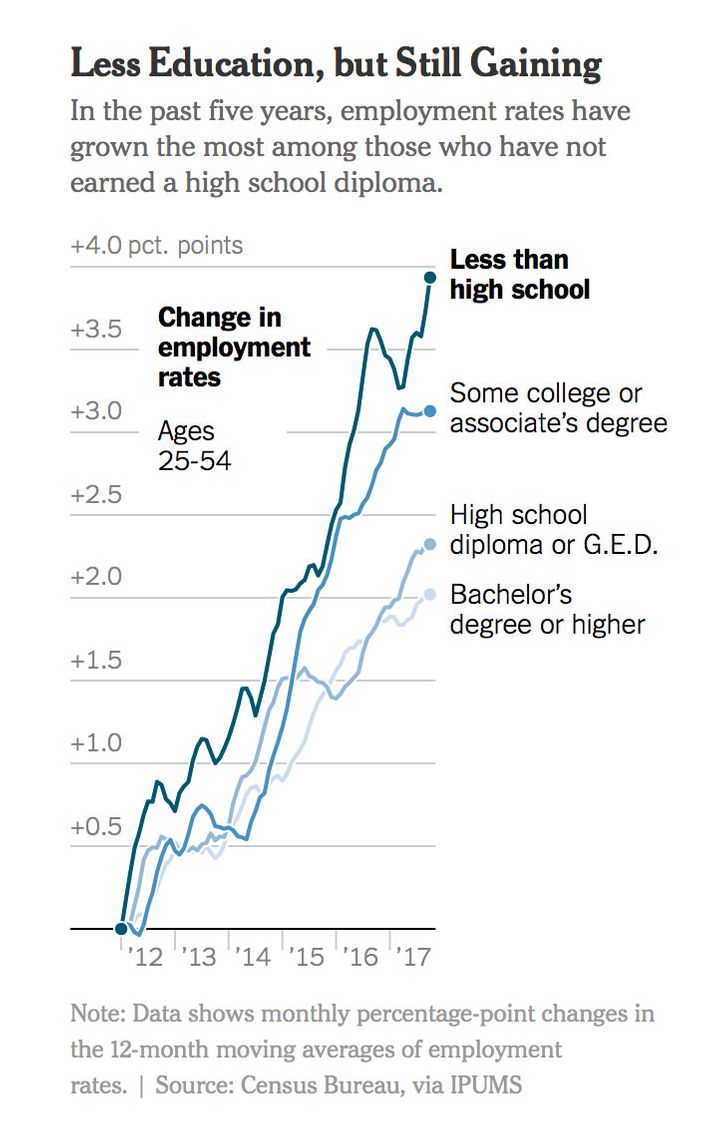 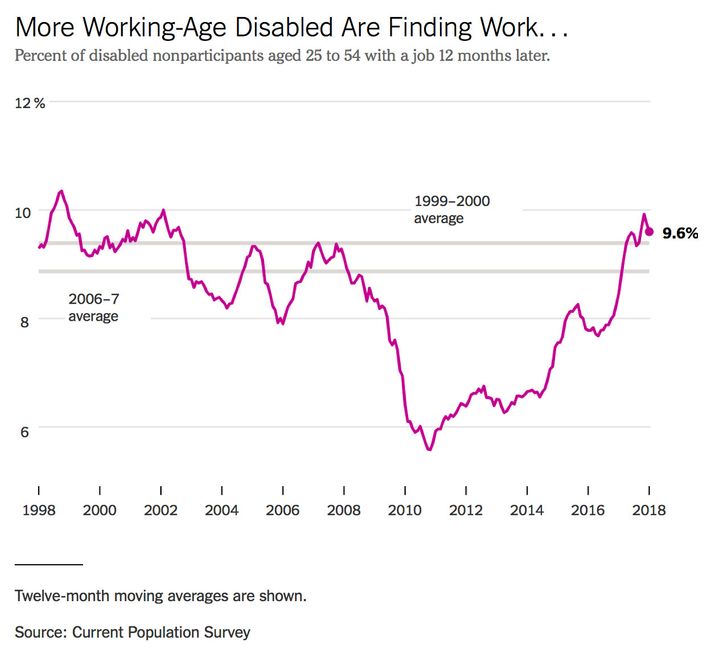 Crucially, the tight labor market that’s making all this possible appears to be sustainable in the medium-term. Years ago, many mainstream economists believed that the U.S. could not maintain an unemployment rate as low as the current one without suffering damaging inflation. But consumer prices remain stubbornly below the Federal Reserve’s target. Assuming there isn’t some major disruption to the global economy, the job growth train should keep chugging for a while yet.

Of course, that’s no safe assumption these days. For the moment, Trump’s looming trade war with China is doing a number on the stock market, but leaving the real economy largely unscathed. It’s possible that the uncertainty generated by the president’s tariff threats could, by themselves, depress investment in manufacturing and agriculture in the short-term. But until those threats turn into realities, they’re unlikely to have major consequences for the broader economy. And given how quickly the president watered down his 25 percent “across-the-board” steel tariffs, it’s hard to suspect that the Great Trade War of 2018 will end before it begins — which is to say, shortly after Xi Jinping hands Trump some largely symbolic concession to trumpet over Twitter.