In case you’ve been living under a rock and don’t already know, you can learn pretty much everything you need to about the premise of SpongeBob SquarePants by listening to the theme song. “Who lives in a pineapple under the sea,” a pirate asks a chorus of kids who reply, in unison, “SpongeBob SquarePants.” “Absorbent and yellow and porous is he.” (Just imagine the kids shouting after every one of these.) “Who’s nautical nonsense be something you wish.” “Then drop on the deck and flop like a fish.” Translated out of pirate speak, the show is about an anthropomorphic cartoon sponge, who built his home inside a piece of fruit, and the undersea antics he gets into with his pals. In other words, it’s a show that asks you, the viewer, to lean heavily on your imagination. Pineapples don’t grow in the ocean! You just have to go with it.

Nowhere in the show are you asked to suspend your disbelief more than in “Idiot Box” (not even the episode devoted to Mr. SquarePants repeatedly ripping his pants as a joke until he annoys all of his friends and has to win them back by performing a Beach Boys–inspired number to a crowd of roaring fans). In this episode from season three, SpongeBob and his best friend Patrick Star have ordered a new television. When it arrives, the pair throws out the device and keep only the box it came in. SpongeBob’s neighbor, Squidward, is baffled by the move. Why throw out a perfectly good television? “We don’t need television, as long as we have our … imagination,” SpongeBob tells Squidward. On that last word, SpongeBob brings his hands together, raises them over his head and arcs them out as a rainbow appears following the path of his hands.

The rest of the episode involves Squidward getting angrier and angrier at SpongeBob and Patrick for all of the imaginary fun they have inside the box. When Squidward attempts to re-create said fun for himself inside the box, he fails. What he believes to be the sounds of a race car that he dreamed up in his head are actually the noises of a garbage truck picking up the box from the curb to bring it to the dump (with Squidward still inside). The plot mostly doesn’t matter — the bit that sticks, as far as memes go, is that singular image of a wide-eyed SpongeBob holding a rainbow in his hands.

As for the origin of “Imagination” as meme, the real growth came via Meme Generator and its ilk — the plethora of sites that lets users create classic Impact-font memes popular back in the old days. “Imagination” the perfect image macro. Anything you put on top of a picture of a sponge wearing a tie and holding a rainbow is funny. It works great with the literal caption, “Imagination,” but also works just as well if you slap, well, truly anything on top of it. “Procrastination.” “Russia Collusion.” “When you’re high AF and start seeing shit.” “Cocaine.” “Schadenfreude.” The options are endless. 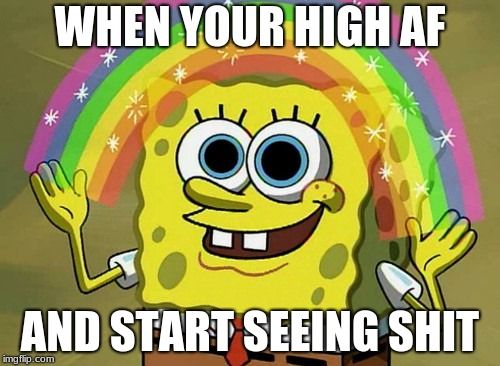 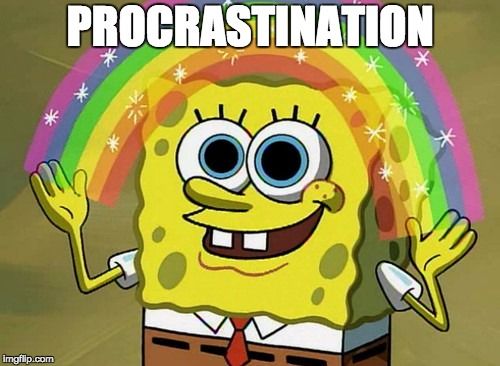 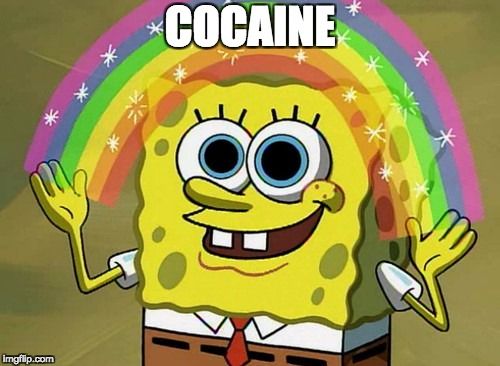 There is one caption that is particularly pervasive in the Imagination meme canon. It’s one that’s particularly antithetical to the original spirit of the episode: “Nobody cares.” What better way to tell somebody off than by doing so with SpongeBob SquarePants, a seemingly innocuous character engineered to make children laugh. That inversion is what makes the “Nobody cares” caption so effective. You’re getting told that you are alone and worthless by a children’s cartoon.

It helps that apathy has become a predominant way of thinking online, where personal expression feels both vulnerable and ephemeral. There are millions of people trying to make a statement online — who cares about what you have to say in particular? “Nobody cares” SpongeBob feels a little like Bikini Bottom’s answer to “Condescending Wonka,” a picture of a smug-looking Gene Wilder. It’s rude. It stings! It’s not the SpongeBob SquarePants you thought you knew and loved. 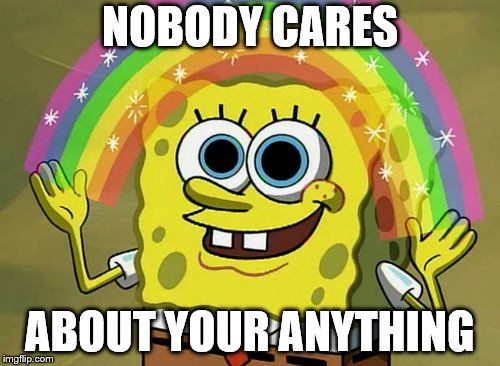 Here’s a musical version of the meme — the original track is from a 2011 video from YouTuber Octopimp — featuring the phrase “Nobody cares” sung repeatedly to the tune of Beethoven’s 5th Symphony. What could possibly hurt more than basically being told to screw yourself via a classical music–inspired riff on a meme derived from a Nickelodeon show I ask you? Nothing. That’s what.

The saddest thing about the evolution of the “Imagination” meme into the “Nobody cares” meme is that it goes against everything its source material was all about. “Idiot Box” was an episode about having fun with your friends. About encouraging other people to join in on the fun, to use their imaginations to temporarily abandon the soul-crushing boredom of suburban life and escape to better places. It was, quite literally, about caring! SpongeBob would have been so disappointed in us for using his image this way. Whatever that thing is you’re telling your friend, or your brother, or a random stranger on the internet that nobody cares about … you’re wrong. SpongeBob, in all his dumb, yellow glory, would have cared.

THE FEED
12:08 p.m.
early and often
early and often
The Drama-Lover’s Guide to the New Trump Books
By Margaret Hartmann
Love gossip but not enough to actually read the new batch of Trump books? Here are all the juicy, disturbing, and darkly amusing tidbits you missed.
10:01 a.m.
the sports section
the sports section
The Mets Are Great. They’re Also Great TV.
By Joe DeLessio
SNY’s creative broadcasts are matching the excellent vibes of this year’s team.
9:00 a.m.
the national interest
the national interest
Why Every New Trump Crime Just Makes Republicans Angrier at the FBI
By Jonathan Chait
But the Feds have not treated him unfairly.

8:00 a.m.
announcements
announcements
Introducing Court Appearances: Twitter v. Musk
By The Editors
The richest man in the world is headed to trial, and we’ll be there to cover it.
6:00 a.m.
trump family
trump family
The Last, Lonely Days of Ivana Trump
By Nina Burleigh
Her friends wish she’d never met the rakish young Italian they called the “snake.”
8/15/2022
early and often
early and often
Los Angeles DA Avoids Chesa Boudin’s Fate
By Ed Kilgore
A like-minded recall effort targeting District Attorney George Gascón, backed by the police and prosecutors, has fallen short.
8/15/2022
what we know
what we know
Salman Rushdie Is on the ‘Road to Recovery’ Following Gruesome Attack
By Chas Danner and Victoria Bekiempis
The acclaimed author was grievously wounded and remains hospitalized but was taken off a ventilator and again able to speak on Saturday.
8/15/2022
tremendous content
tremendous content
11 Questions About the Dr. Oz Crudités Video
By Margaret Hartmann
Paying too much to dip raw asparagus in salsa may not be a relatable problem for Pennsylvania voters.
8/15/2022
the city politic
the city politic
Liz Holtzman on Why Guts and Expertise Matter More Than Age
By Nia Prater
The 81-year-old former congresswoman says she feels called to get back in the fight.
8/15/2022
the money game
the money game
Why Is Anyone Still Betting on Adam Neumann?
By Kevin T. Dugan
Venture-capital behemoth Andreessen Horowitz placed its biggest-ever bet on what looks to be a rent-to-own empire.
8/15/2022
plagued
plagued
What Is Going on With America’s COVID Booster Plan?
By Chas Danner
The Biden administration wants to reboot the U.S. booster drive with reformulated vaccines this fall. Here’s what we know.
8/15/2022
what we know
what we know
Top-Secret Documents at Trump’s Mar-a-Lago: What We Know
By Intelligencer Staff
The search warrant used by the FBI was unsealed, and it shows potential violations of the Espionage Act.
8/15/2022
books
books
Trump’s Fathers
By Sarah Jones
Two recent books demonstrate the GOP’s long descent from reason and a country in serious danger.
8/15/2022
the money game
the money game
The Crypto Geniuses Who Vaporized a Trillion Dollars
By Jen Wieczner
Everyone trusted the two guys at Three Arrows Capital. They knew what they were doing — right?
8/14/2022
the city politic
the city politic
New York Times Sticks It to Progressives in New York’s Democratic Primary
By Ross Barkan
The editorial board’s backing of Dan Goldman, Jerry Nadler, and Sean Patrick Maloney for Congress also shows a disdain for identity politics.
8/14/2022
u.s. capitol
u.s. capitol
Man Dies by Suicide After Driving Car Into Barricade Near U.S. Capitol
By Chas Danner
The man drove into a barricade and fired a gun in the air, but police don’t seem to believe he was targeting any members of Congress.
8/13/2022
the group portrait
the group portrait
The Subtle Differences of the Many Candidates for New York’s 10th District
By Errol Louis
It’s a very crowded race for one of the city’s most progressive districts.
8/13/2022
tremendous content
tremendous content
Trump Raid Can Satisfy Your O.J. Simpson–Scandal Nostalgia
By Margaret Hartmann
The latest sign the ’90s are back: a divisive scandal that ends with a guy going down for stealing his own memorabilia.
8/13/2022
the money game
the money game
Are We in a Recession or a Vibecession?
By Kevin T. Dugan
Some of the numbers are good, but the feelings are bad.
8/12/2022

8/12/2022
Joe Biden’s Best Week Ever
By Jonathan Chait
8/12/2022
early and often
early and often
Biden’s on a Roll. So When Will He Become Popular Again?
By Ed Kilgore
The president remains far from the kind of job-approval numbers associated with the three presidents who escaped midterm misery.
8/12/2022
early and often
early and often
Read The Unsealed Trump Search Warrant
By Nia Prater
Agents removed boxes of documents with “top secret” information inside.
8/12/2022
inflation reduction act
inflation reduction act
IRA Is Already Taken, Democrats
By Nate Jones
The party needs a name for its bill that doesn’t summon images of Joe Manchin in a balaclava.
8/12/2022
crypto
crypto
At What Point Do You Become a Money Launderer?
By Kevin T. Dugan
A software developer was arrested for “involvement” in a crypto program allegedly used by North Korea to launder money but isn’t accused of the crime.
8/12/2022
public health
public health
It Looks Like There’s Polio in New York City
By Matt Stieb
Wastewater data suggests the virus is probably spreading among the unvaccinated in the five boroughs.
8/12/2022
past is prologue
past is prologue
Trump Allies’ Post-Raid Probe Won’t Be Anything Like the Church Committee
By Ed Kilgore
The ’70s panel the GOP keeps referencing was a broad, bipartisan review of intelligence agencies. The MAGA version would just target Trump’s enemies.