Many SpongeBob memes, like the cartoon show that they’re derived from, are heightened, theatrical forms of the emotions we experience every day: confusion, FOMO, ridicule, surprise, minor deviancy. Despite the fact that they are cartoon animals, they speak to the human condition. They are helpful for conveying the precise sentiment online, where communication happens via text instead of voice. The right image pairing makes all of the difference when it comes to the right tone.

﻿The flip side of this is that talking and interacting online gives us a lot of leeway to be vague and imprecise. One of my favorite emoji, for instance, is the neutral face (😐), the type of emoji one might deploy when someone says something ridiculous. To me, it signals something like, “I don’t even need to explain why that’s wrong,” or “I know that you know that what you just said is stupid.”

The SpongeBob meme equivalent of the neutral-face emoji is known as “*breath in* boi” — and it looks like this: 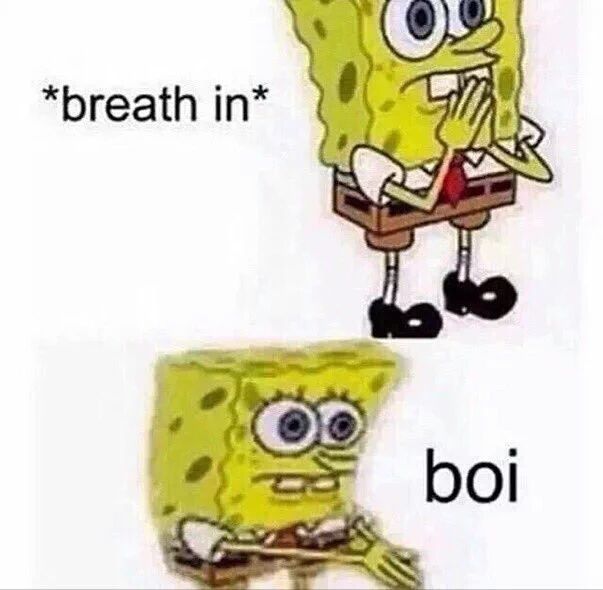 The origins of the meme stretch way back to 2003, to a Flash game on Nickelodeon’s website. Based on a karate-centric episode of the series, SpongeBob’s Kah Rah Tay Contest was a simple 2-D fighting game in which SpongeBob battled Sandy. This would explain why SpongeBob looks slightly … off. His eyes vacant, his mouth flat and expressionless.

Twelve years later, as Know Your Meme tells it, an anonymous 4chan user uploaded two frames from the game side by side to the site’s fashion board, with the caption “WHO DIS NIKKA???” KYM cites this as the first known use, but it is highly unlikely that this was the first actual use. Examining the image closely shows that hands-down SpongeBob, on the right, has been subject to noticeably more image compression than the sponge on the left. This sponge has already been around the block a few times.

By mid-2016, he had become “*breath in* boi,” one of the most understandable and yet also baffling memes in the SpongeBob canon. On the one hand, the utility is obvious. The reaction shown here is one of compassion and honesty — a deep breath before you drop some unwanted truths. It signals, “I don’t want to do this, but I will — for your sake.” One caption appended to the image reads, “When the white kid with the sketchers try’s to roast you.”

Maybe someone says something dumb.

Maybe someone does something gross.

There's a dude clipping his nails at the table next to us at Cheddars. pic.twitter.com/SJffUvuKdT

Maybe an old Canadian politician makes a failed attempt to connect with the youth.

That the character willing to roast you brutally is SpongeBob only adds to the humor. SpongeBob is a dork; he wears a tie and shiny shoes. But in rare moments, he’s not afraid to be brutally honest. His face loses all expression, he makes his prayer hands, he takes a deep breath, and then he hits you with the “boi.” There’s no argument you can refute, no way to fight against it.

On the flip side, this meme is nasty. Like, it has been through hell, chewed up and spit out by the social-media meme machine. One of its most endearing aspects is that the caption is “breath in” not “breathe in,” a small distinction that adds a lot to the meme’s scrappy feel. But there’s also the nature of the cropping — the top of SpongeBob’s head is cut off, and his legs are missing at the bottom. The cropping seems like the type you’d find in a social-feed image preview, before tapping on the image to expand. As of now, that is the only version of this meme that exists. The original has apparently been lost in the shuffle.

All of these aspects have combined to form, to my mind, an incredible meme that plays against the SpongeBob genre. Other SpongeBob memes recycle the meticulously constructed frames from the actual TV show, but this … this is madness. The art is already bootleg-Flash-animation quality; the caption is awkwardly phrased; it’s been compressed to a muddy resolution and cropped aggressively.

In some ways, it feels like this meme has succeeded in spite of itself. Or at the very least, it demonstrates that the universality of SpongeBob is larger than the show’s level of quality. Instead it speaks to the characters themselves as icons. Even divorced from the show’s universe, set against a blank white background, staring expressionless into the void, taking one breath and saying just a single syllable, SpongeBob can express a precise sentiment. Is there any other character who can do the same?