The thing that should jump out at you about the pigeon meme is that it’s obviously not a pigeon. It’s so clearly not a pigeon that the man asking the question “Is this a pigeon?” should be met with laughter or ridicule or an aggressive exaggerated eye roll. What he should not be met with is sympathy or understanding. If you’re a grown-ass man, you should be able to understand that a butterfly — despite having wings — is not a pigeon. 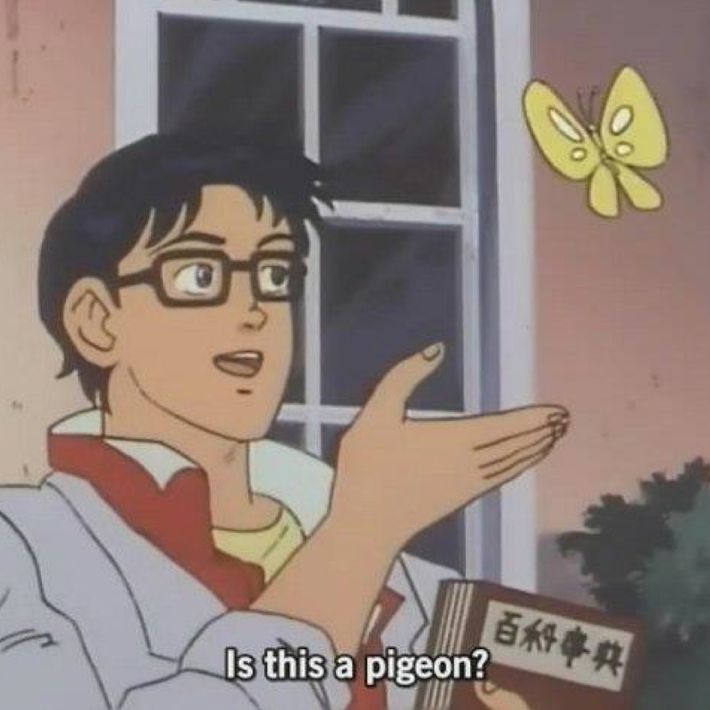 The image comes from an episode of the obscure, early-’90s anime series Brave of the Sun Fighbird and features Katori, a character who one might assume is a man but is actually, according to Kara Dennison, “a space alien thing who possessed an android in order to interact with humans.” (That would explain the stupidity.) Dennison, who used to spend much of her time fan-dubbing (producing unofficial translations of anime for English-speaking audiences), explained in a blog post that she was the one who created the infamous caption.

I then proceeded to forget all about this show because I subtitled about 56 dozen things during my fansubbing years, and then about 56 more during my pro-subbing years before I moved on to news and features. Also literally no one cares about brave shows except me and five of my friends.

And then suddenly. A couple years ago. Fighbird screencap on Tumblr.

It was originally pegged as a bad translation, and I can completely understand that. Fortunately somewhere along the line it was established that nah, Katori is just that dumb. From there, it came and went, mostly with friends popping any new iterations of it to me just to see my reaction.

If you’re interested in how it generally appeared in its original Tumblr context, here it is appended to a reblog chain of a story involving a stray coyote mistaken for a dog. No edits, no object labeling — just a punch line in and of itself about mixed-up identity.

It didn’t really take off on Twitter until it began to be used for object labeling — the meme version of editorial cartooning, in which objects become loudly signposted metaphors for other things. (Think about the stock photo of the guy holding hands with his girlfriend, looking over his shoulder to ogle another woman.)

i made a meme about myself pic.twitter.com/Yk3ca2wGh0

The pigeon meme is part of the rich internet tradition of establishing difference through memes. Think of Hillary Clinton versus Bernie Sanders, or the Krusty Krab/Chum Bucket binary, or of Drake eschewing one thing and pointing approvingly at another. Each of these memes attempt to distinguish between two things.

In this sense it is refreshing. “Is this a pigeon?” is a meme that requests introspection instead of outward performance. It acknowledges mistakes without directly criticizing them. In image macro format, we don’t know if Katori’s question is answered with a yes or no, or no response at all. We only see that he is incorrectly conflating two distinct objects. Is he innocently wrong? Is he disingenuously leading? It asks the reader to make the inference. This openness makes the meme more flexible. Katori (or whatever he represents) is free to ask his dumb, wrong question without being immediately roasted for doing so.

This particular gesture, the neutral cleaving apart of two conflated but distinct phenomena, feels particularly necessary. Social media has spiraled out into a continuous performance of bad faith. Whataboutism, false equivalency, sea-lioning, concern trolling, and derailing all represent attempts, in various ways, to muddy the waters, to make it difficult to distinguish between right and wrong, to mislabel and misapprehend. The internet is made to link one thing to another. “Is this a pigeon?” is made to reestablish that those things are separate. It is a meme suited for this particular moment, when something good might actually be something bad.

Also, it’s funny, and there’s no shortage of people to create content around anime online.

+Comments Leave a Comment
Is This Pigeon Meme a Think Piece?