Somewhere in between my college years and now — probably right about when the word adulting came into favor — the internet turned its back on FOMO. “Fear of missing out,” the grown and stupid version of adolescent peer pressure that propels people out into the night, lest they miss something epic, is out. Staying in is, well, in.

Reaction images to the tune of “it me” corroborate the assessment. A virtual landscape of screenshots from television and film support a few “universal” truths: Netflix — good; parties — bad. Getting ready to go out — fun; going out — not. Making plans — hot; following through on those plans — no bueno. There’s no shortage of panicked “Millennials Gone Mild”–type pieces and, even if not entirely representative of the evening habits of my generation, the trials of being in public versus the small penalty of flaking out catalyzes a robust category of online humor.

Strange then is the virality of one particular SpongeBob SquarePants meme among the same sample of introverted homebodies. Dubbed “Squidward staring out of the window,” the meme, as its name describes, includes an over-the-shoulder shot of Squidward as he stares out a shuttered window from inside his Moai-head fortress. Outside, SpongeBob and Patrick are caught mid-frolic, eyes bright, mouths open, both hands in the air. We cannot see Squidward’s expression, a void that ultimately proves crucial to the meme’s comedy.

From the season-eight episode “That Sinking Feeling,” the image occurs in a scene where, as per usual, SpongeBob and Patrick rouse the grumpy Squidward, likely from some highbrow pursuit. Just before the memeable screenshot, we see him open the window from the outside, face blank. He watches SpongeBob and Patrick run back and forth between their respective houses, his pupils like red apostrophes moving left to right to left before his face curls into a bristling scowl. He stomps outside, stops his neighbors in their tracks. “Stop. Playing,” he grits out. “In my yard!”

Squidward has had cause to regret his curmudgeonly ways on several occasions across the show. In “The Paper,” he trades everything, including the shirt off his back, for a piece of paper after SpongeBob demonstrates the fun to be found in a simple object. In “Idiot Box,” he envies his neighbors’ capable imaginations when he is less entertained by a new television than they are by the discarded box it came in (that episode, incidentally, gave rise to another meme, “Imagination SpongeBob”). But in “That Sinking Feeling,” Squidward remains solidly unamused by their antics. He wants nothing to do with their play, so much so that he prohibits them from stepping foot on his property, compelling them to dig a hole underground in order to continue their back and forth merriment.

Excerpted and restaged in the language of digital culture, Squidward’s missing face becomes a means to express the most acute FOMO. The visual is only part of the joke. Like most internet memes, the image acquires substance through a match with text. In “Squidward staring out of the window,” text gives voice to Squidward and his neighbors from their respective positions on either side of the window. SpongeBob and Patrick, true to the visual, are having the time of their lives. Squidward, an onlooker, transforms into a creature of longing. “Juniors looking at graduating seniors like,” says one simple version of the meme. The juniors play Squidward, jaded and exhausted and jealous of seniors’ freedom, or perceived freedom.

Perhaps the most illustrative of the meme sprang from an event that occurred on Twitter the night of January 5, 2017. At 11:01 ET, Yahoo! Finance tweeted an article about the projected size of Trump’s navy and made a crucial mistake. “Trump wants a much bigger navy: here’s how much it’ll cost,” the tweet was supposed to say. Unfortunately, QWERTY places the letters B and N right next to each other. Fortunately, the twin powers of Night Twitter and Black Twitter are unmatched. Yahoo left the tweet up for 45 minutes, a lifetime in Twitter years and more than long enough for folks to get their jokes off. That same night, a version of the Squidward meme arose to represent the racial barrier that excluded white people from joining in the fun. 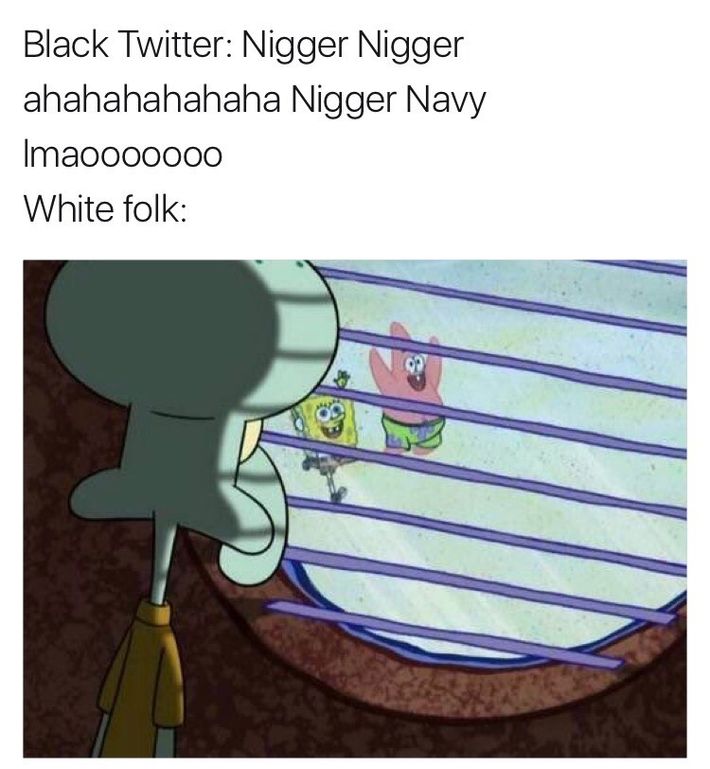 Here, SpongeBob and Patrick are “Black Twitter” (the part of the internet run by black people that drives tons of memes and social-media chatter) turning a corporate blunder into a comedy festival. “White folk,” necessarily prohibited from joking about a racial slur, could only watch from afar. Though the identity of the person who originally tweeted this version of the meme is unknown (that account, @ErikaBaDolt has since been suspended), its language suggests that it comes from someone black, reemphasizing the communal in-ness of the Nigger Navy moment by envisioning a sense of FOMO among white observers. Whether or not any white users felt genuinely excluded on this night in particular matters little. The crux of the joke — that the broader internet, and white folk, constantly surveil and mine the exploits of “Black Twitter” — rings accurate.

As in another popular SpongeBob meme, contrast is important. However, the real driving mechanism behind “Squidward staring out of the window” is projection. Whether seen from the point of view of the observer or those reveling or a third-party witness, the meme presumes to know who feels what — less “it me” than “it them.” After all, the concept of FOMO is more a projection than a premonition; the prospect of being excluded causes us to imbue going out with unearned urgency. When we give in and become participants, instead of watching Instagram Stories from the wings, it is a disappointment — not because there wasn’t fun to be had, but because that fun could never have matched the emotional amplitude we imagined.

Maybe FOMO isn’t quite dead yet. Maybe FOMO has merely slid into other venues and experiences compatible with the ever-expanding ways in which a person may be “out” and “in” as an adult in the social-media age. The best memes do not simply reflect life, but refract it, giving space to work out anxieties by first admitting to them in communal space online. Sometimes we are Squidward, sometimes we are SpongeBob, sometimes we are content to watch from just out of frame, knowing soon enough our turn will come again.

+Comments Leave a Comment
Squidward, SpongeBob, and the Complex Emotions of FOMO

THE FEED
9:57 a.m.
politics
politics
Not Even Alex Jones Can Help Kanye West
By Nia Prater
The Infowars host kept trying to let him denounce Nazis, but he doubled down on his admiration of Hitler.
9:00 a.m.
games
games
The U.S. Can Absolutely Beat the Netherlands on Saturday
By Will Leitch
Your guide to this weekend’s very big, very winnable game.
8:33 a.m.
stop the presses
stop the presses
The New York Times Newsroom Gets Ready to Walk Out
By Shawn McCreesh
It’s a frosty winter for the media business.

8:00 a.m.
the group portrait
the group portrait
Elon Musk’s Former Employees Pour One Out for Twitter
By James D. Walsh
In New York, they gathered at a favorite post-work bar. They commiserated, gossiped, swapped numbers, and promised to keep in touch.
8:00 a.m.
the law
the law
Why Hasn’t Sam Bankman-Fried Been Arrested Yet?
By Ankush Khardori
Bernie Madoff was arrested in a matter of days after his fraud came to light, but SBF is still a free man. What gives?
12/1/2022
mar-a-lago raid
mar-a-lago raid
Appeals Court Smacks Down Judge Who Ruled for Trump Over FBI
By Chas Danner
The 11th Circuit Court of Appeals excoriated U.S. District Judge Aileen M. Cannon’s interference in the Mar-a-Lago raid investigation.
12/1/2022
2022 midterms
2022 midterms
Why Did Democrats Get the Late Breaks in the Midterms?
By Ed Kilgore
A lot of the shock and awe over the midterm results was the product of an expectation of a late Republican surge that didn’t happen.
12/1/2022
2022 midterms
2022 midterms
Another Former Lover Accuses Herschel Walker of Misconduct
By Ed Kilgore
Many women have painted a portrait of Walker as an unstable and violence-prone man possibly suffering from untreated mental illness.
12/1/2022
early and often
early and often
Democrats Should Worry About Signs of Lower Black Turnout
By Ed Kilgore
Even in states where Black candidates headed up Democratic tickets, turnout was down. Democrats need to figure out why that happened.
12/1/2022
the money game
the money game
Why The Economy Is Starting To Feel Good All Of A Sudden
By Kevin T. Dugan
The Federal Reserve looks ready to ease up on throttling the economy. Have we averted disaster?
12/1/2022
sbf: the virtue was the con
sbf: the virtue was the con
What Does Sam Bankman-Fried Have to Say for Himself?
By Jen Wieczner
An interview with the disgraced CEO.
11/30/2022
early and often
early and often
The Many Ways MAGA Republicans Threaten Kevin McCarthy
By Ed Kilgore
The House Freedom Caucus and its MAGA allies want power over their party’s House caucus. But above all, they want scorched earth between the parties.
11/30/2022
royal family
royal family
It’s Another Chapter of Racism and the Royal Family
By Benjamin Hart
A royal aide allegedly asked a British guest at Buckingham Palace what part of Africa she was from.
11/30/2022
early and often
early and often
Trump Was Tricked Into Dining With Too Many Antisemites
By Margaret Hartmann
The poor guy didn’t know about Nick Fuentes, he just wanted to hang with Kanye West — who repeatedly attacked his Jewish son-in-law, Jared Kushner.
11/30/2022
all the live long day
all the live long day
Why America’s Railroads Refuse to Give Their Workers Paid Leave
By Eric Levitz
Wall Street’s new robber barons can’t make the trains run on time.
11/30/2022
early and often
early and often
Herschel Walker Can’t Shake His Texas Residency Problem
By Ed Kilgore
The GOP Senate candidate is being hit with renewed questions about his residency, which underscore claims that his heroic image in Georgia is hollow.
11/30/2022
politics
politics
Hakeem Jeffries Elected As Next Leader of House Democrats
By Nia Prater
The 52-year-old congressman will become the first Black person to lead a congressional party.
11/30/2022
the inside game
the inside game
One of Democrats’ Biggest Draws This Year? Dave Matthews.
By Gabriel Debenedetti
Jamming out the white suburban Gen-X vote.
11/30/2022
world cup
world cup
Pulisic Says He’ll Return From Very Painful-Sounding Injury
By Benjamin Hart
“Pelvic” and “contusion” are two words you never want to see together.
11/30/2022
screen time
screen time
Why Elon Musk Is Picking a Fight With Apple
By John Herrman
He speaks of a civilizational battle. But he probably sees a potential business advantage.
11/29/2022
politics
politics
What a Difference 10 Years Makes: The Senate Votes to Protect Same-Sex Marriage
By Nia Prater
The legislation received support from several Republican senators, including Mitt Romney, who once openly opposed same-sex marriage.
11/29/2022
games
games
The U.S. Pulled It Off
By Will Leitch
They survived a tense second half and an injury to their best player to beat Iran.
11/29/2022
early and often
early and often
Republicans: Leave the World’s Richest Man Alone!
By Margaret Hartmann
Ron DeSantis and Kevin McCarthy want everyone to “stop picking on Elon Musk.” They’ve barely said anything about Trump dining with antisemites.
11/29/2022
politics
politics
Eric Adams Says His Upcoming Trip to Qatar Is ‘On My Dime’
By Nia Prater
The mayor is set to travel to Doha, Qatar, in preparation for New York City to serve as a host city for the 2026 FIFA World Cup.
11/29/2022
on with kara swisher
on with kara swisher
Chemist Carolyn Bertozzi on Biology’s Dark Matter
By Intelligencer Staff
The 2022 Nobel Prize winner tells Kara Swisher why cancer cells are a lot like M&Ms.