We often speak of young voters as an important element of the “Obama Coalition” that elected and reelected the 44th president, and as a key building block — along with minority voters — of a hypothetical future Democratic majority. But that generalization hides a major, growing gender gap among the young folks.

In 2016, according to exit polls, women under the age of 30 voted for Hillary Clinton by a 63/31 margin. Men under 30 gave her a much more modest 46/42 edge. This 17-point gender gap in votes for Clinton was larger than the overall 13-point gender gap in the electorate as a whole.

A Pew survey in March showed a rapidly increasing gender gap in party identification among millennials (defined as those born between 1981 and 1996) as of the end of 2017, when men were Democrats or Democratic-leaners by a 49/41 margin, but women tended in that direction by an astonishing 70/23 margin.

And now in a new Pew generic congressional ballot question posed to a large sample of registered voters, women under the age of 35 tilt Democratic by a 68/24 margin, while men under the age of 35 prefer Republicans by a 50/47 margin. That’s a 21-point gender gap in the Democratic percentage, and a 26-point gender gap in the Republican percentage. Meanwhile, there’s a smaller gender gap among voters aged 35–49, and barely one at all among voters over 50. 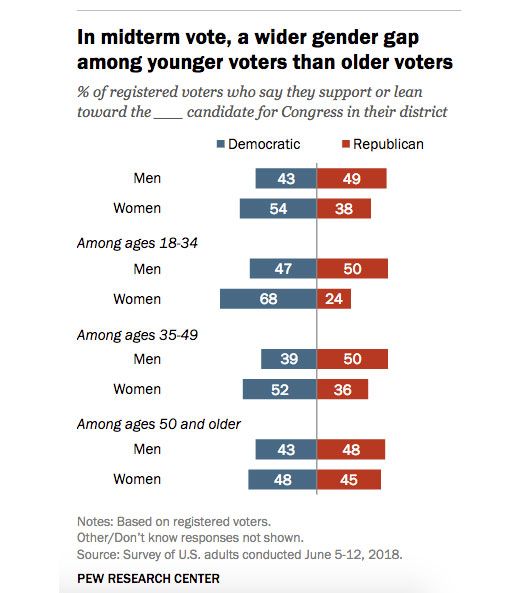 These are pretty astonishing numbers, reflecting a trend that’s been under way for a while. And it suggests pretty clearly that odds of a Democratic wave in the 2018 midterm rest heavily on a strong turnout from young women, who are rejecting Trump and his party by near-historic margins. Meanwhile Democrats have some missionary work to do with young men. Given the high percentage of them who are from minority groups that lean strongly Democratic (some 44 percent of millennials are from minorities), you have to figure there’s some MAGA mojo going on to lift Trump and the GOP to such a strong position.