During today’s annual Worldwide Developers Conference keynote, Apple introduced a number of new features building on last year’s Animoji announcement. (The 3-D emoji that you animate using your face — they are only available on the iPhone X — are extremely fun for things like making a tiny, cartoon cat sing along to Cats the musical.) Apple’s list of Animoji is expanding to include a koala, a tiger, a ghost, and a dinosaur. It’s also expanding to include your own face with a new feature called … Memoji. [Pause here for groan.] 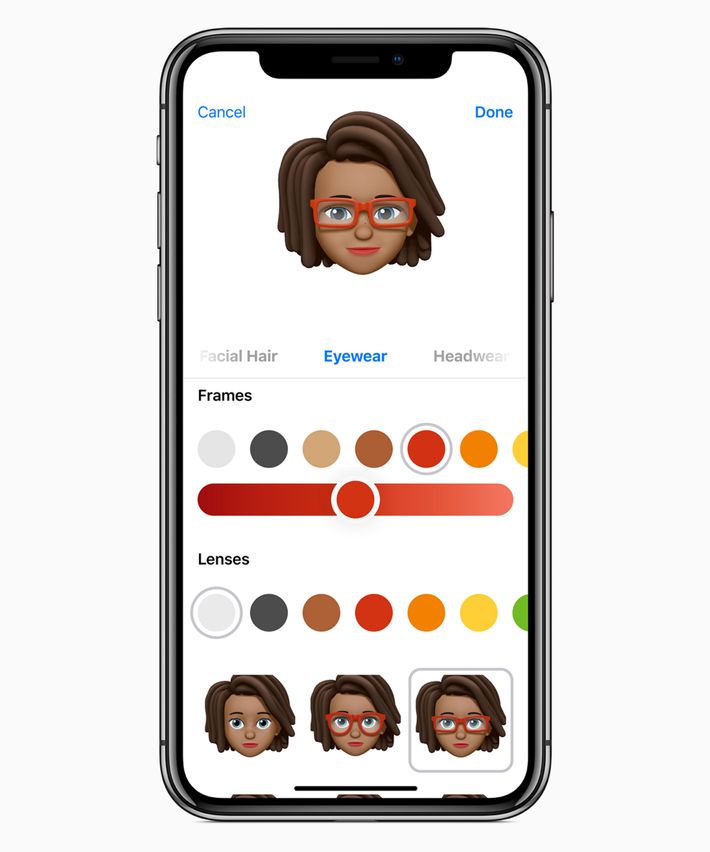 Users will be able to create personal avatars — Apple demonstrated a number of customization options, including skin color, hair, glasses, and freckles — and then save them to their phones to use in later conversations. (Does this sound like an existing feature from Samsung? Or Bitmoji/Snapchat? Or Facebook? It should.)

Actually love the design of Memoji. Compare to the creepy-awkward Facebook Spaces characters. This stuff is so hard. pic.twitter.com/w0liTBA6KF

In addition to using the Memoji in iMessage, you’ll be able to use them — assuming you shelled out the thousand or so bucks for the iPhone X — to decorate your photos and videos. Plus, you’ll also be able to use them in FaceTime. Which means you can show your cartoon face to up to 32 people at a time, another new update from today’s event.

Another, slightly less large, update from the world of Animoji today was … “tongue detection.” You wouldn’t think the phrase tongue detection would have been met with one of the loudest rounds of applause of the day, but here we are, folks! Tongue detection basically means that now when you move your face to animate an Animoji, the Animoji will now have a tongue. Because your phone can now detect your tongue. Technology! It’s just the best!

1960: There will be flying cars in 2018.
2018: Apple introduces tongue detection for Animoji. pic.twitter.com/nV3hPqqndl

+Comments Leave a Comment
Memoji Is Apple’s Version of Bitmoji