Visitors to trumphotels.org got a taste of the president’s most unwelcome guests.

Any gold-paint aficionados attempting to view President Trump’s collection of hotel extrusions at TrumpHotels.org this weekend saw quite a different type of lodging. Instead of towering fountains and golf courses, those visiting the TrumpHotels.org site saw the photo of four young immigrant boys covering themselves with silver emergency thermal blankets. A swipe to the right shows a photo of several dozen immigrants crammed inside a cage containment center at the U.S. border.

It remains unclear who purchased the domain name and how long they have owned it; despite the president’s best attempts at domain squatting, TrumpHotels.org somehow managed to slip through the cracks.Trump has moved aggressively to gobble up unflattering domain names associated with his brand in the past. According to CNN Money, the Trump Organization owned over 3,000 domains prior to his presidency and since the election Trump has continued purchasing domain names.

At the risk of explaining the joke: The site has arisen in the wake of the Trump administration’s controversial “zero tolerance” policy on immigration — which led to the forced separation of over 2,000 children from their families. After waves of heated criticism from reporters, activists, and even conservative darling Laura Bush, the president caved and signed an executive order ending his own child-separation policy. 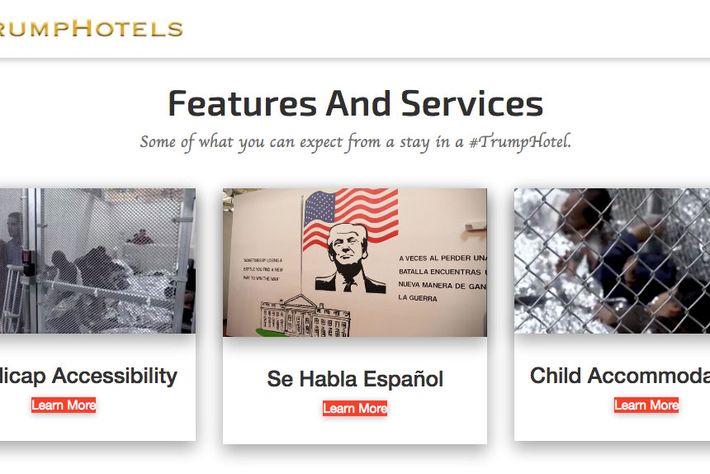 Twitter has, of course, also picked up on the site’s hashtag, #trumphotels, and people have started posting their own images mocking the president.

This image may be used without my permission. #trumphotels #KeepFamiliesTogether pic.twitter.com/YZCuIlEqua

Whoever the site’s owner is, they seem keenly aware of the president’s vindictive streak when it comes to criticism. In 2012, one of Trump’s lawyers reportedly sent a gold letter to someone who bought the Trump.org domain and threatened to sue him for $100,000.