Popular pro-Trump YouTubers Diamond and Silk reignited conservatives’ claims of censorship after they were removed from Facebook.

Since social media took over the world, prominent conservative politicians and media icons have cried foul at what they see as a malignant, unfair liberal bias across the tech industry — one that results in what they claim (with little evidence) to be the suppression of conservative content on Facebook, Twitter, and in Google search results. While once a narrow view confined to hyperpartisan extremes, this narrative has become the new normal.

According to a new survey released by the Pew Research Center, 85 percent of surveyed Republicans believe it’s likely that social-media sites censor their political opinion. Of those, 54 percent described the prospect of social-media censorship as “very likely.” 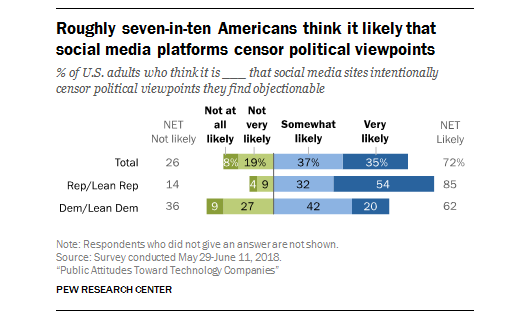 Though alarming due to the sheer vastness of this reported anxiety, this mass concern over censorship has tangible, traceable roots. The social-media-censorship narrative gained major traction in 2016 after a 2016 Gizmodo report found that former Facebook News curators had manipulated the trending section to downplay conservative news, seemingly vindicating many conservatives’ fears. (After years of headaches, Facebook removed the trending section altogether this month.)

Since then, the accusations have intensified. Earlier this year, pro-Trump YouTube ranters Diamond and Silk were removed from Facebook’s platform after the company deemed their content “unsafe.”

The deplatforming sparked mass outrage from the right, leading prominent senators like Ted Cruz to accuse Facebook of a systematic pattern of bias.

“The pattern of political censorship we are seeing across the technology companies is highly concerning,” Cruz said in a statement in January.

Others, like prominent conservative public figure Ben Shapiro, argue that the high proportion of liberals employed in tech leads to algorithmic bias.

Just one senator needs to ask Zuckerberg what makes his platform a platform rather than a publisher, given the amount of censorship in which Facebook is currently engaged.

The problem is that it’s hard to square the claims of suppression or censorship with the actual state of social media. Despite the innumerable issues with social media as a disseminator of news, it’s unclear if the medium’s negatives really do stymie conservatives. According to research by NewsWhip, conservative publishers outnumbered liberals on Facebook by a margin of three to one in 2017. Similarly, this February they found that the top ten reporters with the highest engagement rates on Facebook were all nonmainstream conservatives. Even President Trump himself has said verbatim that he thought Facebook and Twitter “helped him win,” the 2016 election.

Conservatives thinking tech companies are out to get them may not come as a surprise, but more ominously, the poll suggests that this anxiety has transcended ideological bounds. About 42 percent of Democrats surveyed said it’s “somewhat likely” that social-media platforms censor their views. And 20 percent went even further, saying this censorship is “very likely.”

The New Gatekeepers of Silicon Valley Are Getting Played by Conservatives