President Trump’s chief economic adviser Lawrence Kudlow has made a career out of being extraordinarily wrong about everything without ever reconsidering his absolute devotion to the supply-side economics dogma that has produced all the wrongness. In the middle of a slavish interview on the Fox Business channel this morning, Kudlow asserted that the economy is:

throwing off [an] enormous amount of new tax revenues. As the economy gears up, more people working, better jobs and careers, those revenues come rolling in, and the deficit, which is one of the other criticisms, is coming down. And it’s coming down rapidly.

The deficit is not coming down rapidly. It’s not coming down at all. It’s rising. The Congressional Budget Office’s new update shows the deficit growing both in absolute terms and as a share of GDP. And the financial press has reported that revenues are falling in the wake of the Trump tax cuts.

To be sure, a rising deficit can sometimes be good policy. If your economy is going into recession, you need the government to run a higher deficit in order to support consumer demand. Sometimes, government have emergencies — like World War II — that also require temporary deficits.

But none of these conditions apply. Normally, the deficit tracks the economy, falling during an expansion and spiking during a recession. What makes the current situation so unusual is that the deficit is spiking during the peak of an economic expansion. This chart from a recent Wall Street Journal story shows how unusual and alarming Trump’s fiscal policy is: 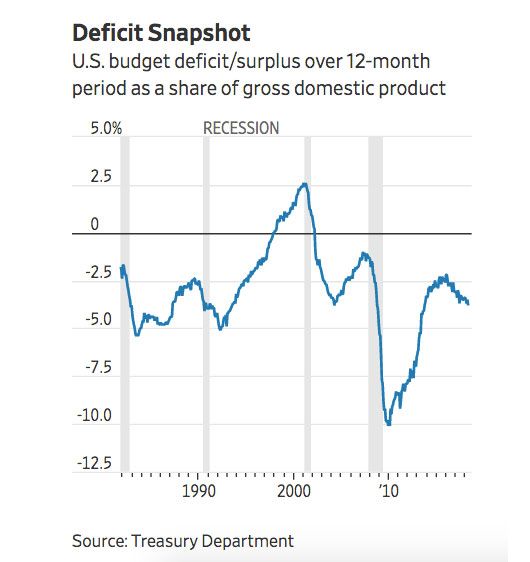 Every previous decline in the government’s fiscal position comes during and after a recession, which is indicated by the vertical gray lines. The line moves upward, indicating a falling deficit, during the recoveries — or, it has during every previous recovery. That downturn on the right side of the graph shows the deficit rising now even without a recession.

It would not be terribly impressive if the deficit was falling. It should be falling in an economy at peak capacity. It was falling for several years beforehand. Now it’s alarmingly spiking.

Naturally, Kudlow’s claim that the deficit is “coming down rapidly” was not corrected by the Fox Business host Maria Bartiromo. Her response to his ludicrously false claim was “Of course.” Kudlow boasted during the interview, “This is old-fashioned supply-side economics.” And it is! Which is to say, a policy of cutting taxes for the rich combined with delusionally optimistic claims about what is happening.

Update: Kudlow tells Wall Street Journal reporter Nick Timiraos he meant the deficit will come down in the future:

Reached by phone, Kudlow told me his comment was meant prospectively.

It reflects his view not that deficits have come down sharply, but that they will be coming down as growth rises "faster than virtually any forecasters think."

That is not what Kudlow said. He said the deficit is coming down, not that he believes it will. I do think Kudlow is being completely honest, though, in his conflation of the present and future tenses. In the mind of supply-siders, it is simply an iron law of the universe that higher taxes on the rich reduce revenues, and lower taxes on the rich raise them. The fact that the opposite has happened over and over, and is happening again right now, is completely immaterial to him. He is so certainly certain of his theory he can boast of its success as though it is happening already.

THE FEED
15 mins ago
screen time
screen time
Why Elon Musk Is Picking a Fight With Apple
By John Herrman
He speaks of a civilizational battle. But he probably sees a potential business advantage.
11/29/2022
politics
politics
What a Difference 10 Years Makes: The Senate Votes to Protect Same-Sex Marriage
By Nia Prater
The legislation received support from several Republican senators, including Mitt Romney, who once openly opposed same-sex marriage.
11/29/2022
games
games
The U.S. Pulled It Off
By Will Leitch
They survived a tense second half and an injury to their best player to beat Iran.