The warning has been inescapable to the point of being exhausting over the first 18 months of the Donald Trump era. Democrats have been told that they simply must come up with a positive message that’s not just anti-White House; if they fail to do so, the midterms — and then 2020 — will surely bring years of unrelenting doom to the left. The party’s taken the basic message to heart: It’s now hard to find a candidate out there campaigning on anything other than bread-and-butter issues like health care, immigration, and economic opportunity. Some avoid mentioning Trump altogether.

But by placing an unrelenting focus on that affirmative vision, Democrats have mostly turned away from figuring out how, exactly, they should be talking about the president, when they have to. It’s a question they never fully answered in 2016: Should the national party try painting him as irresponsible and rash? Perhaps hyperconservative and severe? Maybe immature to the point of corruption?

Enter a group of leading Democratic operatives, who on Wednesday are set to offer a new framework for understanding how Americans view and discuss the president — who, after all, is the whole reason the midterms are shaping up to be so competitive to begin with. Figuring that we’re stuck in an image-first media environment driven by a similarly flash-focused president, Navigator Research, a coalition of top party pollsters and strategists from across the left, tested a set of images rather than words or phrases to gauge how Americans view the commander-in-chief.

Their primary finding, according to a copy of the report viewed early by New York: More than anything else, Americans view Trump as a narcissist in it for himself over the country, and they believe his attitude is sowing chaos and tearing the country apart. It’s far from a silver bullet anti-Trump message, but understanding that this underpinning sentiment is the most popular one among voters could prove an important first step toward building a coherent anti-Trump line for the party.

When asked to pick an image that best describes Trump’s personality, roughly four in ten participants in Navigator’s survey chose a picture of Trump looking at himself in a mirror, compared to just around one in five who chose either a crying toddler or a man yelling at a phone: 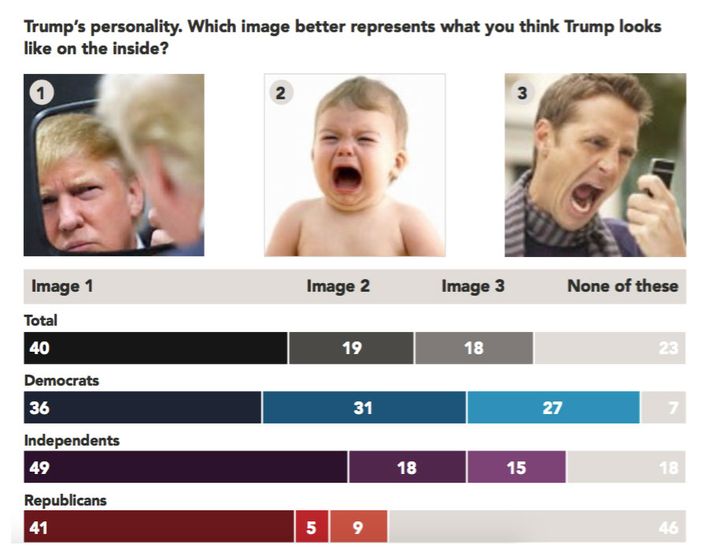 The numbers are closer among Democrats: 36 percent chose the mirror photo compared to 31 who opted for the toddler. But among independents, there was an overwhelming break toward the mirror. Roughly half pointed to Trump as self-absorbed. In follow-up questions, 58 percent said they believe Trump wants what’s best for himself over the country, and the same proportion believes he looks down on people like them.

When asked about their view of the White House, the respondents veered away from institutionalized corruption, and instead toward disorder: a sketch of papers flying all over an office that appears to be entirely askew beat an image of a “HOUSE FOR SALE” sign in front of the building, by a 42-to-18 percent margin: 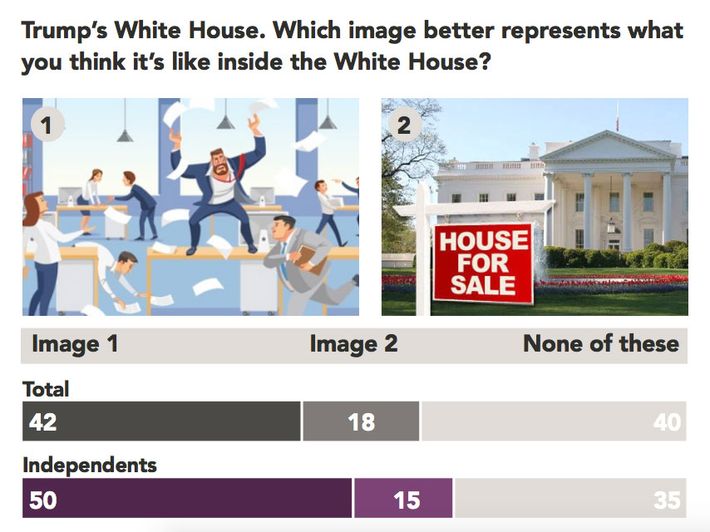 And, when asked how historians will look back on Trump’s time in office, they largely favored a rendering of an American flag with a crack down the middle over a photo of Trump posing like a circus ringmaster: 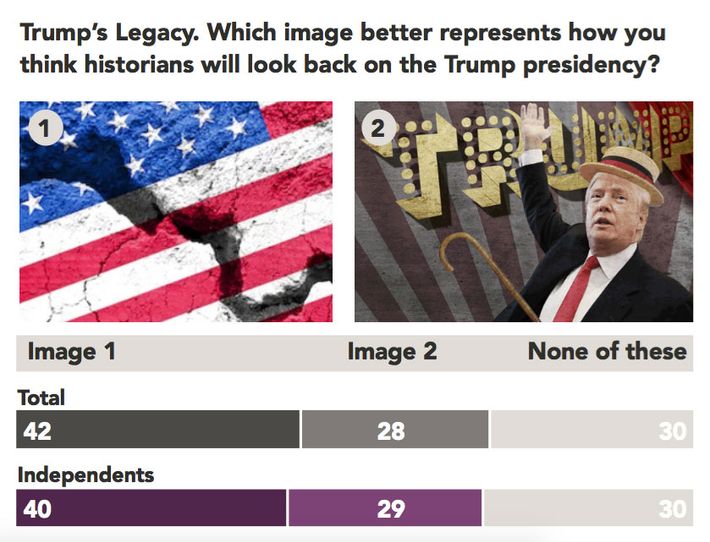 The findings are set to land at a strategically delicate time: just as campaigns prepare for Americans to turn their attention toward the midterms later this summer, and as a handful of potential 2020 contenders make their presence felt on the campaign trail, where they’ll be able to test their messages with down-ballot candidates. Trump, for one, has already been just as active as many leading Democrats in trying to set the playing field. Navigator — a collaboration between a wide range of Democratic officials who work for labor unions, think tanks, and super-PACs, among other groups — has already released two other reports in recent months aiming to give the party messaging guidance while the cable-pundit class is consumed with the idea that Democrats’ lack of a single slogan spells electoral death.

Yet this latest set of findings also comes while Democratic operatives look back at what went wrong with Hillary Clinton’s anti-Trump messaging. Whereas the Democratic nominee focused on his temperament for much of the general election, party campaigners are now desperate to sharpen that blunt argument as much as possible, and as early as possible before 2020.

But Wednesday’s set of findings also pushes back on the notion that it’s somehow destructive for Democrats to — on occasion — focus on a historically unpopular president. When asked to pick an image that best describes the Trump administration’s policy goals, Americans picked a photo of Barack Obama that appears to be getting erased over a wide range of other options, including a man standing on a pile of gold coins, a handshake between Trump and Vladimir Putin, people behind bars, and an explosion.

In other words, it’s hardly just Democrats who have a messaging problem.

“It serves as a rebuttal of the notion that Democrats are the party that lacks a positive message,” the report reads, echoing a growing frustration on the left. “Democrats would no doubt be helped by communicating a clearer vision, but shouldn’t be afraid to put forth a similar and clearly credible critique of today’s GOP.”

+Comments Leave a Comment
How Should Democrats Tackle Trump? Focus on His Narcissism

1:14 p.m.
side effects
side effects
Why the Second COVID Shot Makes You Miserable
By Jeff Wise
Unpleasant side effects are in part a consequence of lightning-quick vaccine development.
12:04 p.m.
foreign interests
foreign interests
Withdrawing From Afghanistan Is Biden’s Least Bad Option
By Jonah Shepp
The pullout of U.S. troops will likely have tragic consequences for Afghans, but remaining indefinitely offers no clear path to victory.
10:00 a.m.
politics
politics
5 Revelations From John Boehner’s New Memoir
By Jonann Brady
In On the House, the former Speaker praises Nancy Pelosi’s “killer instinct,” unloads on Ted Cruz, and claims Mark Meadows once begged on his knees.
9:27 a.m.
intelligencer chats
intelligencer chats
What the Mainstreaming of Crypto Means for Normies
By Benjamin Hart and Jen Wieczner
Digital currencies are likely to become more intertwined with everyday life.
8:00 a.m.
politics
politics
The GOP’s Barebones America
By Sarah Jones
Behind a narrow definition of infrastructure lies a narrow vision for the country.
7:58 a.m.
mass shootings
mass shootings
8 Killed in Shooting at FedEx Warehouse in Indianapolis
By Margaret Hartmann
At least five other people had been hospitalized with injuries, including one in critical condition. Police said the gunman killed himself.
7:00 a.m.
capitol hill
capitol hill
Chuck Schumer Has Changed
By Gabriel Debenedetti
Why is the former “angry centrist” pushing his party to go bigger, bolder, and more progressive?
4/15/2021
nyc mayoral race
nyc mayoral race
The New York City Mayoral Race Is Starting to Get Petty
By Matt Stieb
In the nation’s largest city, leading mayoral candidates Andrew Yang and Eric Adams squabbled on Thursday over New York officials’ parking habits.
4/15/2021
vision 2020
vision 2020
Yes, Geographical Polarization Was a Big Deal in 2016 and 2020
By Ed Kilgore
New data shows that the suburban swings to the left and rural swings to the right are consistent with the intuitive trends in the last two elections.
4/15/2021
crime
crime
Why Do Tasers Look Like Guns Anyway?
By James D. Walsh
Daunte Wright’s killer is not the first law-enforcement officer to confuse the two, often with deadly consequences.
4/15/2021
police shootings
police shootings
Video Shows Chicago Police Shooting and Killing 13-Year-Old With His Hands Up
By Intelligencer Staff
The Chicago agency investigating police shootings released the graphic footage of an officer shooting Adam Toledo, whose hands were raised.
4/15/2021
infrastructure
infrastructure
GOP to Biden: Raise Taxes on Our Rural Base, Not Coastal Elites
By Eric Levitz
Biden wants to fund infrastructure with taxes on the (largely coastal) corporate elite. Republicans insist on soaking their own base instead.
4/15/2021
coronavirus
coronavirus
Israel Drops COVID Rule Requiring Masks Outdoors
By Matt Stieb
It’s a milestone for one of the nations to roll out the vaccine the fastest, though vaccination rates in Palestine lag significantly.
4/15/2021
extremism
extremism
McConnell Howls About Court-packing Just As Pelosi Nixes It
By Ed Kilgore
It’s a good example of how smears of the opposing party can run abruptly into countervailing reality.
4/15/2021
minnesota
minnesota
Is This a Community?
By Zak Cheney-Rice
Despite their rhetoric, the Brooklyn Center police have an open disinterest in actual community with city residents.
4/15/2021
climate change
climate change
New York Magazine’s David Wallace-Wells Testifies Before the Senate on Climate
By Paola Rosa-Aquino
Author of The Uninhabitable Earth on the cost of inaction.
4/15/2021

“The routine surgery was successful, and he is expected to fully recover and return to normal activity in the coming days,” Pence’s office says.
—@NBCNews
4/15/2021
crime
crime
Derek Chauvin Invokes Fifth Amendment, Won’t Testify
By Nia Prater and Margaret Hartmann
The defense has rested and closing arguments are set for Monday.
4/15/2021
the economy
the economy
The Biden Boom Has Begun
By Eric Levitz
Jobless claims are falling, factory production is rising, and retail sales are skyrocketing as Biden’s stimulus kicks in.
4/15/2021
politics
politics
Independents Aren’t Nonpartisan, They’re Just Disengaged
By Ed Kilgore
The increasing number of self-identified independents feeds partisan polarization by turning the parties over to ideologues and “outsiders.”
4/15/2021
crime
crime
Ex-Officer Who Fatally Shot Daunte Wright Charged With Manslaughter
By Nia Prater
Kim Potter was arrested and charged with second-degree manslaughter on Wednesday. She has been released on a $100,000 bond.
4/15/2021
covid-19
covid-19
What We Know About the Johnson & Johnson Pause and Vaccine Hesitancy
By Paola Rosa-Aquino
Europe faced a similar problem over a shot and clots.
4/15/2021
solarwinds
solarwinds
U.S. Sanctions Russia Over SolarWinds Hack
By Benjamin Hart
For the first time, the Biden administration named a specific suspect it deems responsible for the breach.