Trade war is the health of the state. Photo: Andrew Harrer/Bloomberg via Getty Images

A few weeks ago, it looked like Donald Trump’s “trade war” might end up being an industrial policy told by an idiot, full of sound and fury, signifying nothing much.

Sure, the president had announced across-the-board tariffs on steel and aluminum imports in early March — but shortly after that declaration, his administration began handing out exemptions to American allies. Similarly, although Trump had unveiled tariffs on $50 billion worth of Chinese imports this spring, by late May, his Treasury Secretary had announced the postponement of those duties — while the president touted China’s offer to increase its importation of American farm products as a major trade victory.

Granted, Trump has been railing against America’s trade deficit for three decades, making it one of the only consistent aspects of his political “thought.” But he’s never been invested enough in the substance of trade policy to, say, Google whether America runs a trade deficit with Canada before discussing that subject with its prime minister — let alone to read books about it. Economic nationalism might have been one of Trump’s hobby-horses since the late 1980s; but the supremacy of style over substance has been the North Star of his entire adult life. Making demagogic declarations of trade war — and then letting the Goldman Sachs wing of the White House quietly defang his threats — seemed perfectly consistent with the president’s broader modus operandi.

But then, on June 1, Trump really did impose those metal tariffs on Canada, Mexico, and the European Union —and proceeded to revel in our allies’ rage at the G7. And now, the president is moving full speed ahead with his tariffs on China. On Friday, the White House announced that it will slap a 25 percent duty on $34 billion worth of Chinese imports on July 6, and another on $16 billion of additional Chinese goods later this year. The administration also plans to unveil new restrictions on Chinese investments in the U.S. — and on the types of advanced technology that American firms can export to Beijing — by the end of this month.

The official purpose of Trump’s tariffs against China is to protect the intellectual property rights of major U.S. businesses. A probe conducted by U.S. trade representative Robert Lighthizer earlier this year uncovered evidence that Beijing uses restrictions on foreign ownership of companies within China to coerce American corporations into transferring their technology to its own domestic enterprises. Lighthizer’s report also alleged that China steals trade secrets through cyberattacks, and directs its firms to invest in U.S. companies, so as to gain access to information about strategic technologies and then transfer it to the Chinese government.

Lightizer’s basic charge — that the Chinese government does not respect other nations’ intellectual property laws — is uncontroversial.
A U.S. International Trade Commission investigation conducted during the Obama years found that IP theft cost American firms nearly $26 billion in 2009, while a study from the U.S. software industry put that figure as high as $60 billion in 2011.

But whether ordinary Americans actually have an interest in policing such theft is less clear. When China violates an American company’s software patents, said company’s profit margins (and thus, shareholders’) may take a hit — but American consumers likely benefit from the lower prices on software. And the same holds for other patent-protected products like pharmaceuticals (which Trump has repeatedly argued are far too expensive in the United States).

Regardless, the tariffs themselves will have some immediate downsides for ordinary Americans. The duties are somewhat limited, impacting only a fraction of the approximately $505 billion worth of goods that Americans buy from China on an annual basis. And the fraction that is subject to tariffs consists primarily of advanced industrial inputs and technology, like robotics, automobiles, and heavy machinery. Nevertheless, these are likely to produce some increase in consumer prices. More significantly, Beijing has vowed to retaliate with tariffs on $50 billion worth of American exports, with an eye toward (politically sensitive) agricultural and manufacturing products.

But Trump is (reportedly) not worried by such threats. Even though Xi Jinping is better-positioned to win an extended trade conflict — both because his government can more easily insulate its citizens from the harms of such a conflict through direct intervention in the economy, and because he is more politically insulated from popular backlash to rising prices (what with being the authoritarian leader of a police state, and all) — the president appears to believe that the economic expansion he inherited is robust enough to weather some trade war–induced turbulence.

In fact, Trump hopes to open a new front in that war by the time voters head to the polls this November: According to Politico, Trump has asked the Commerce Department to declare foreign automobiles a threat to “national security” before the midterm elections, thereby enabling him to unilaterally impose a 25 percent tariff on foreign cars. Trump is, ostensibly, convinced that raising taxes on American car buyers would be a big political winner for his party this fall.
And in some districts, that theory could be right. The policy’s immediate impacts will be difficult for many voters to ascertain, while its symbolism will likely resonate with some Rust Belt residents. Further, Democrats have been very reluctant to push back on Trump’s protectionism.

.@realDonaldTrump’s actions on China are on the money. China is our real trade enemy, & their theft of intellectual property & their refusal to let our companies compete fairly threatens millions of future US jobs. https://t.co/28UM7p9v2c

And yet, there’s little evidence that tariffs — particularly, on European and Canadian goods — are a winning issue nationally. In recent days, a Morning Consult poll found a plurality of the American public opposes the steel and aluminum tariffs, while a NBC News/Wall Street Journal survey showed 51 percent of voters saying they would be reluctant to support congressional candidates who back tariffs.

As a substantive matter, the duties that Trump has already enacted aren’t working out too well for the American public. As Catherine Rampell notes in the Washington Post, the president’s tariffs on imported washing machines have already produced a 17 percent increase in the price of laundry equipment in the United States, the highest such spike ever recorded. “When you aggregate all those price increases across the 10 million washers sold annually in the United States, consumers will collectively pay hundreds of thousands of dollars per year for each job supposedly created or saved,” Rampell writes. 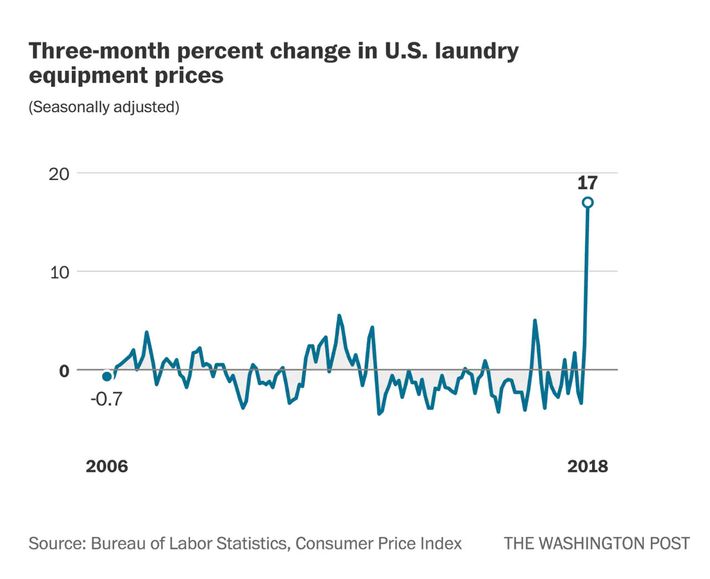 But the true genius of Trump’s trade policy lies in its ad hoc, mindlessly uncoordinated nature: Even as the president jacked up washer prices to protect Whirlpool’s market share, he also radically increased the cost of the firm’s primary input with his steel tariffs. As a result, the price of steel is now more than 50 percent higher in the U.S. than overseas — which means that, even with the duties on washer imports in place, it’s possible that overseas laundry equipment manufacturers might still be able to compete with domestic ones on price.

All of which is to say: After passing an enormous tax cut for the rich, the president is effectively raising taxes on middle-class consumers, as part of an utterly incoherent and under-researched industrial policy that appears motivated solely by gut instinct and a egoistic desire to demonstrate his nationalistic toughness to a small segment of the electorate.

This seems like something Democrats should mention to voters, especially those in suburban districts with an affinity for foreign cars.