Something is happening. In the interest of full disclosure: I will freely admit that I’m not sure what is happening, but it’s something. Like monkeys at typewriters eventually banging out the complete works of Shakespeare, the internet’s denizens have discovered a sequence of words so fun, so … catchy, that it’s difficult to get it out of your head. For no apparent reason other than the incredible image it conjures in the mind of its user, humanity is now saddled with the phrase “this is so sad Alexa play Despacito.”

Say it again, this little gem of a phrase, to yourself. “This is so sad Alexa play Despacito.” It’s perfect.

Here is a Google Trends map showing the relative popularity, measured hourly, of the search query “this is so sad Alexa play Despacito” — it rises. 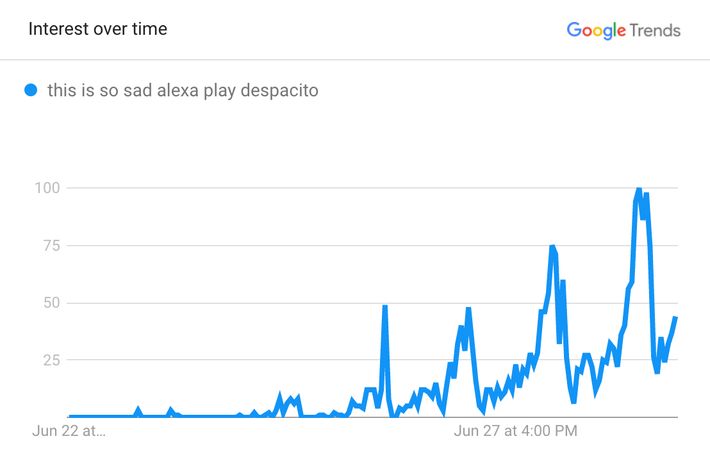 Where is this coming from? It all started with a text post on Tumblr, the weirdest (and, imo, best) social network. Take it away, Tumblr user bisexuael.

Over DM, bisexuael, whose real name is Garrett, told me, “Honestly I just made the post because my cat ate my spaghetti when I wasn’t looking.” He added that “Despacito,” the 2017 Spanish-language megahit from Luis Fonsi and Daddy Yankee, is “a pretty good song but the meme is so funny to me.”

So there is a meme here, but nobody really has a definitive handle on what it is. “The original post I made was just a personal post of mine that didn’t really make sense out of context, and it ended up spreading without anyone knowing what the post was even about.”

And it’s definitely spread. A quick search of pithy sites like Twitter and Tumblr finds tons of mentions of “this is so sad Alexa play Despacito,” often inserted into pop culture properties like Marvel movies or anime or K-pop.

nakia: t'challa was murdered in a ritual combat

m'baku: this is so sad alexa play despacito

jeno: [falls on stage]
renjun: this is so sad alexa play despacito

lysa: *gets thrown out the moon door to her death*

sansa: this is so sad alexa play despacito

elphaba: my father hates me

glinda: this is so sad alexa play despacito

You can swap out “Despacito” if you want. Here’s the recent South Korean victory over Germany in the 2018 World Cup:

The stan corners of the web have clearly taken to this phrase. The database Know Your Meme suggests that this text meme spawned from a separate trend involving the phrase “this is so sad.” In parodying the sort of heartstring-tugging content that goes viral on the “normie” or “local” internet (the majority of online spaces populated by lame, well-adjusted people), “this is so sad” is used to highlight how people online often tell instead of show. It’s not enough for an image or viral anecdote to be sad — the poster also needs to say “this is so sad” explicitly.

Maybe the “Despacito” phrase is an offshoot of this other thing, but I somehow doubt that the decidedly unironic stan section of the web and the completely ironic “deep-fried meme” part of the web are playing off each other.

Part of the power of “this is so sad Alexa play Despacito” comes from its lack of punctuation. The two halves bleed into each other seamlessly. Is “Despacito” supposed to mean that the speaker is moving on from something sad or is “Despacito” something that they listen to when they’re sad? Either option is funny.

Now think of how you play music now versus how you might have in the past. A few years ago, you might just hit the play button. Now, you have to take a breath and say out loud to Alexa, a fake person, “Alexa, play ‘Despacito.’” In essence, you have to ask Alexa for permission to play “Despacito.” In your saddest moments, you ask for someone to give you the gift of “Despacito.” That’s funny. I cannot explain it any more than that: The shift from playing music at the press of a button to having to ask for music from your disembodied robot wife is just funny, especially when juxtaposed with tragedy.

someone: tells a sophisticated joke that takes context to understand it
me: ...ok
twitter: this is so sad alexa play despacito
me: pic.twitter.com/lKfrwXk86y

+Comments Leave a Comment
‘This Is So Sad Alexa Play Despacito,’ Explained(?)