In one of his now almost-daily statements purporting to defend President Trump while in fact making him appear extremely guilty, Rudy Giuliani told S.V. Dáte that the president’s categorical immunity from criminal prosecution would include murdering his political opponents. “In no case can he be subpoenaed or indicted. I don’t know how you can indict while he’s in office. No matter what it is.” Even if he shot former FBI director James Comey? “If he shot James Comey, he’d be impeached the next day,” Giuliani said. “Impeach him, and then you can do whatever you want to do to him.”

It might sound reassuring to hear from Trump’s lawyer that he believes the president is not immune from the law because he can be impeached. But it is less reassuring than it might sound.

The first problem with Giuliani’s impeachment remedy is that, if Trump shot James Comey, he would deny having done so. (Murderers often lie about what they’ve done, and Trump is not known for his compulsive honesty.) The question of how Comey was shot would be a mystery that federal law enforcement would wish to solve. But Trump also maintains that he has the absolute right to halt any federal law-enforcement investigation. He also claims to have the right to initiate legal investigations into anybody, for any reason, which would allow him to pressure any witnesses, or to induce them to destroy evidence. What’s more, he indisputably possesses the right to pardon any witnesses or accessories to the crime.

Even if he couldn’t succeed in quashing the investigation, Trump could at least attempt to obstruct it. Unless he happened to carry out the shooting on live television, the Trump-shooting-Comey hypothetical would, in reality, devolve into a fight over investigative detail. The FBI would be trying to track down the killer, Trump would be fervently denying it, and using his powers to impede the investigation. Fox News would be airing theories that Comey was actually killed by the Clintons, or perhaps fell on the bullet. The less absurd conservatives would be complaining about whether it was fair to prosecute various Trump associates for secondary crimes, like lying to the FBI.

The second problem is that, even if the FBI managed to defeat Trump’s attempts at obstruction and present overwhelming evidence of guilt, impeachment (or impeachment and removal, anyway) would be far from certain. Trump’s prophetic claim in January, 2016, that he could stand in Fifth Avenue and shoot somebody and not lose any voters is relevant here, and not only because it entertains the exact scenario Giuliani describes. Trump has proven deeply popular with the Republican base. He in fact commands more support from self-identified Republicans than any Republican president in the history of polling. 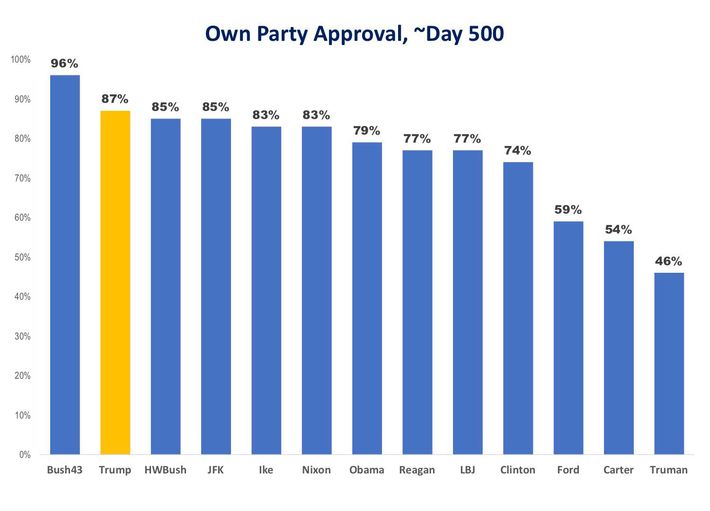 Trump lost his marginal voters very early, putting his reelection in deep jeopardy. But his partisan core has stuck with Trump through a numbing procession of face-plants, petty grifting, violations of norms, or outright illegality. Not long ago, we learned that, having raged at Jeff Bezos and vowed to punish his business interests in retaliation for the Washington Post’s reporting, he ordered the post office to raise rates on Amazon. Under ordinary circumstances, a president carrying out policy retribution against the owner of a newspaper whose reporting he dislikes would be a first-tier scandal and an impeachable offense. The Republican Congress has not so much as held a hearing. This episode simply vanished into the ether like a hundred other Trump scandals.

Removing Trump from office would require not only a House majority, but also two-thirds of the Senate. Trump figured out very early on that Republican voters could be made to believe anything. If Trump shot Comey, his political base would decide that he didn’t really shoot him, or that Comey deserved it, or possibly both.

THE FEED
10:01 a.m.
the sports section
the sports section
The Mets Are Great. They’re Also Great TV.
By Joe DeLessio
SNY’s creative broadcasts are matching the excellent vibes of this year’s team.
9:00 a.m.
the national interest
the national interest
Why Every New Trump Crime Just Makes Republicans Angrier at the FBI
By Jonathan Chait
But the Feds have not treated him unfairly.
8:00 a.m.
announcements
announcements
Introducing Court Appearances: Twitter v. Musk
By The Editors
The richest man in the world is headed to trial, and we’ll be there to cover it.

6:00 a.m.
trump family
trump family
The Last, Lonely Days of Ivana Trump
By Nina Burleigh
Her friends wish she’d never met the rakish young Italian they called the “snake.”
8/15/2022
early and often
early and often
Los Angeles DA Avoids Chesa Boudin’s Fate
By Ed Kilgore
A like-minded recall effort targeting District Attorney George Gascón, backed by the police and prosecutors, has fallen short.
8/15/2022
what we know
what we know
Salman Rushdie Is on the ‘Road to Recovery’ Following Gruesome Attack
By Chas Danner and Victoria Bekiempis
The acclaimed author was grievously wounded and remains hospitalized but was taken off a ventilator and again able to speak on Saturday.
8/15/2022
tremendous content
tremendous content
11 Questions About the Dr. Oz Crudités Video
By Margaret Hartmann
Paying too much to dip raw asparagus in salsa may not be a relatable problem for Pennsylvania voters.
8/15/2022
the city politic
the city politic
Liz Holtzman on Why Guts and Expertise Matter More Than Age
By Nia Prater
The 81-year-old former congresswoman says she feels called to get back in the fight.
8/15/2022
the money game
the money game
Why Is Anyone Still Betting on Adam Neumann?
By Kevin T. Dugan
Venture-capital behemoth Andreessen Horowitz placed its biggest-ever bet on what looks to be a rent-to-own empire.
8/15/2022
plagued
plagued
What Is Going on With America’s COVID Booster Plan?
By Chas Danner
The Biden administration wants to reboot the U.S. booster drive with reformulated vaccines this fall. Here’s what we know.
8/15/2022
what we know
what we know
Top-Secret Documents at Trump’s Mar-a-Lago: What We Know
By Intelligencer Staff
The search warrant used by the FBI was unsealed, and it shows potential violations of the Espionage Act.
8/15/2022
books
books
Trump’s Fathers
By Sarah Jones
Two recent books demonstrate the GOP’s long descent from reason and a country in serious danger.
8/15/2022
the money game
the money game
The Crypto Geniuses Who Vaporized a Trillion Dollars
By Jen Wieczner
Everyone trusted the two guys at Three Arrows Capital. They knew what they were doing — right?
8/14/2022
the city politic
the city politic
New York Times Sticks It to Progressives in New York’s Democratic Primary
By Ross Barkan
The editorial board’s backing of Dan Goldman, Jerry Nadler, and Sean Patrick Maloney for Congress also shows a disdain for identity politics.
8/14/2022
u.s. capitol
u.s. capitol
Man Dies by Suicide After Driving Car Into Barricade Near U.S. Capitol
By Chas Danner
The man drove into a barricade and fired a gun in the air, but police don’t seem to believe he was targeting any members of Congress.
8/13/2022
the group portrait
the group portrait
The Subtle Differences of the Many Candidates for New York’s 10th District
By Errol Louis
It’s a very crowded race for one of the city’s most progressive districts.
8/13/2022
tremendous content
tremendous content
Trump Raid Can Satisfy Your O.J. Simpson–Scandal Nostalgia
By Margaret Hartmann
The latest sign the ’90s are back: a divisive scandal that ends with a guy going down for stealing his own memorabilia.
8/13/2022
the money game
the money game
Are We in a Recession or a Vibecession?
By Kevin T. Dugan
Some of the numbers are good, but the feelings are bad.
8/12/2022

8/12/2022
Joe Biden’s Best Week Ever
By Jonathan Chait
8/12/2022
early and often
early and often
Biden’s on a Roll. So When Will He Become Popular Again?
By Ed Kilgore
The president remains far from the kind of job-approval numbers associated with the three presidents who escaped midterm misery.
8/12/2022
early and often
early and often
Read The Unsealed Trump Search Warrant
By Nia Prater
Agents removed boxes of documents with “top secret” information inside.
8/12/2022
inflation reduction act
inflation reduction act
IRA Is Already Taken, Democrats
By Nate Jones
The party needs a name for its bill that doesn’t summon images of Joe Manchin in a balaclava.
8/12/2022
crypto
crypto
At What Point Do You Become a Money Launderer?
By Kevin T. Dugan
A software developer was arrested for “involvement” in a crypto program allegedly used by North Korea to launder money but isn’t accused of the crime.
8/12/2022
public health
public health
It Looks Like There’s Polio in New York City
By Matt Stieb
Wastewater data suggests the virus is probably spreading among the unvaccinated in the five boroughs.
8/12/2022
past is prologue
past is prologue
Trump Allies’ Post-Raid Probe Won’t Be Anything Like the Church Committee
By Ed Kilgore
The ’70s panel the GOP keeps referencing was a broad, bipartisan review of intelligence agencies. The MAGA version would just target Trump’s enemies.
8/12/2022
plagued
plagued
Paging Dr. Normalcy
By James D. Walsh
Ashish Jha, the COVID czar, wants to make vaccines great again.