Last fall, the Pew Research Center released one of its periodic typologies of the American electorate, identifying the demographic and ideological fissures both within and between the two parties. The two most conservative factions within the Republican Party were familiar types. The first, and largest, “Core Conservatives,” holds doctrinaire positions on everything. This group is “financially comfortable,” and “overwhelmingly supports smaller government, lower corporate tax rates and believes in the fairness of the nation’s economic system,” and also “express[es] a positive view of U.S. involvement in the global economy.” This is the conservatism of Paul Ryan.

Another group, “Country First Conservatives,” is “older and less educated than other Republican-leaning typology groups,” and has more populist and isolationist views. They are “highly critical of immigrants and deeply wary of U.S. global involvement,” and most likely to believe “if America is too open to people from all over the world, we risk losing our identity as a nation.”

The waning months of the Republican primary campaign in 2016 devolved into a contest between Trump and the purity of conservative doctrine. Ted Cruz, the last candidate standing against Trump, represented the latter, and enjoyed the vocal support of most of the organized conservative movement. Cruz called Trump a “fake conservative.” Rick Perry had termed him a “a cancer on conservatism.” Trump’s presidency has driven home the surprising reality that Trump is conservatism.

Among the right-wing intelligentsia, the debate over whether Trump authentically represents or has deviated from movement conservatism has been a full-scale rout. Trump’s loyalists continue to pour through the decimated ranks of their anti-Trump foes, bayoneting the survivors. Here is Emerald Robinson in the American Spectator mocking “low-testosterone, dilettantish” Never Trumpers; here is Townhall’s Kurt Schlichter berating the “dwindling band of bow-tied nimrods.”

Perhaps the most useful tools for identifying the fissures in the party’s ranks are questions related to the Mueller investigation and the rule of law. These have become, for the moment, the most reliable test of one’s loyalty to Trump (as opposed to abstract principles of democracy and the rule of law). The Voter Study Group recently asked a battery of questions. Its most interesting finding is that Ted Cruz voters and Trump voters have essentially indistinct beliefs: 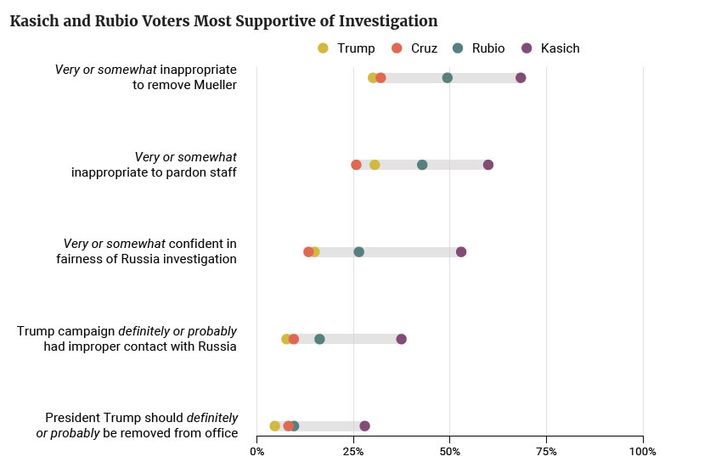 Of course, supporters of Marco Rubio and John Kasich sit closer to the center on questions like firing Mueller, pardoning witnesses, and so on. The more conservative you are, the more you support Trump’s absolute right to overpower the investigation into his campaign. Conservatism has become a reliable proxy for enlistment in the Trump cult of personality.

Another Pew survey, from June, identified the same ideological cleavage. Among Republicans, moderates and liberals were more likely than conservatives to say Mueller’s investigation was important. No such ideological division appeared among Democrats.

Yet another Pew survey, this one from April, got at the dynamic in another way. Asked whether Trump has respect for the country’s democratic institutions, 84 percent of conservative Republicans said yes, while only 65 percent of moderates and liberals agreed.

None of this is to deny the possibility that a principled conservative might oppose Trump. On the contrary, it is perfectly consistent to support smaller government, traditional social values, and so on while maintaining one’s bedrock belief in democracy and the rule of law. Anti-Trump conservatives have not lost an argument. They have merely lost a party.

In October, 2016 — before the Comey letter, when Trump appeared bound for defeat — I argued that the Republican Party’s conservatism and its authoritarianism were fundamentally related strains. Anti-government conservatives had long feared that democracy would facilitate the many to confiscate the resources of the few; meanwhile demographic change has overlaid a parallel ethnic pessimism. For all the ugly anti-intellectualism of Trump’s supporters, they have grasped one underlying reality: Trumpism and conservatism are tethered, and the practical choice in American politics is to have either both or neither.