GDP growth was powered by a short-term surge in exports. Photo: Qilai Shen/Bloomberg via Getty Images

The United States just had its strongest quarter of economic growth since 2014. Between the start of April and the end of June, America’s GDP grew at a 4.1 percent annual rate; during his failed presidential bid, Jeb Bush promised to deliver a mere 4.o.

President Trump touted the “GREAT GDP numbers” in the Commerce Department’s report Friday morning — and predicted that “we’re going to go a lot higher than these numbers” in the months to come. 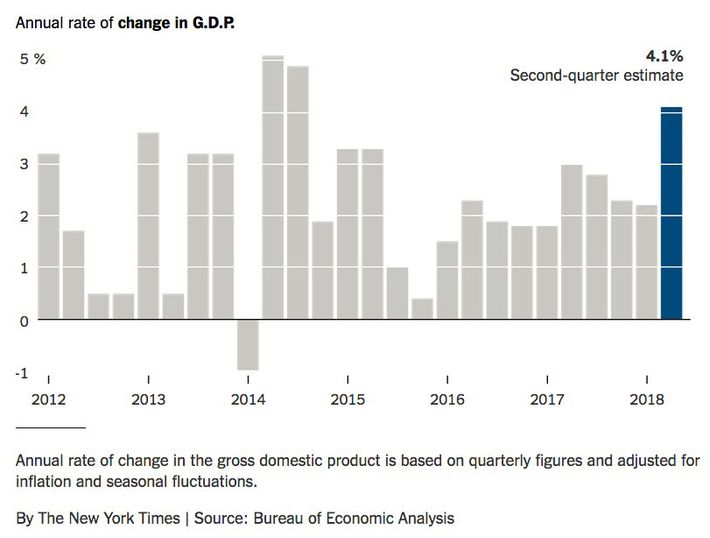 But most economists and financial analysts disagree. And their reasoning is simple: That 4.1 percent growth rate is partially the product of temporary distortions in patterns of trade, and an ephemeral uptick in government spending.

When American producers increase their exports, GDP goes up. And, ironically, Trump’s various protectionist measures spurred a boom for U.S. exporters — because foreign buyers were eager to stock up on American goods before their governments slapped retaliatory tariffs on such products. Thus, the U.S. exported 50 percent more soybeans in May 2018 than it had in May 2017. And since this increase was driven by trade-war fears (as opposed to an explosion in global demand for tofu), soybean exports will likely fall dramatically in the coming months — and bring U.S. GDP down a bit with them.

Similarly, Congress’s budget deal increased federal outlays by 3.5 percent in the second quarter, which also provided a short-term boost to GDP. Elevated levels of government spending should continue for a while longer, but economists expect its impact on growth to peak later this year.

Meanwhile, private investment actually fell over the second quarter — a development that contradicts the GOP’s economic promises. When Republicans passed their multitrillion-dollar corporate-tax cut last winter, they insisted that the legislation would stimulate capital investment, and thus innovation, and thus growth. But this spring, business investment in equipment was sluggish, chugging along at its slowest pace since late 2016. At the same time, residential investment fell for the fourth time in five quarters. A slowdown in housing construction contributed to that decline. Historically, the weakening of America’s housing market has augured poorly for the broader economy.

So, there’s reason to believe that 4.1 percent GDP growth is not sustainable — and even it it were, some analysts think that might not be high enough to sustain the stock market’s post-Trump boom. As Bloomberg’s Stephen Gandel and Brian Chappatta write:

Stocks soared after the election, and more recently interest rates began climbing, apparently on the assumption that Trump, with deregulation and tax cuts, would create a fundamental shift in the economy. Both rates and stocks have cooled recently, but stocks have leveled off at a range that anticipates an economy that will grow significantly faster than it has. The total value of all U.S. stocks is now equal to 154 percent of the annualized GDP. That’s above the 130 percent that the market has traditionally traded around and what many think indicates stocks are fully valued. For the market to get back to 130 percent, it would require a much more robust pace of growth.

It remains possible then, that reality will prove Trump’s ebullient optimism about the future of American economic growth right. But the weight of the current evidence suggests that it will not.

THE FEED
19 mins ago
adam neumann
adam neumann
Adam Neumann’s New Business Plan
By Kevin T. Dugan
The former WeWork CEO wants to get rich(er) by helping corporations appear more environmentally sustainable than they really are.
1:04 p.m.
partygate
partygate
Millionth Boris Johnson Pandemic Party Exposed
By Benjamin Hart
Will this be the one that forces his resignation? Nah, probably not.
12:57 p.m.
early and often
early and often
Perdue Ends Flailing Campaign With Racist Remarks About Stacey Abrams
By Ed Kilgore
The former senator capped off his Trump-inspired challenge to Governor Brian Kemp by accusing the Democrat of “demeaning her own race.”