Knocking on Doors With Julia Salazar

Meet the other Democratic Socialist running in a New York election. 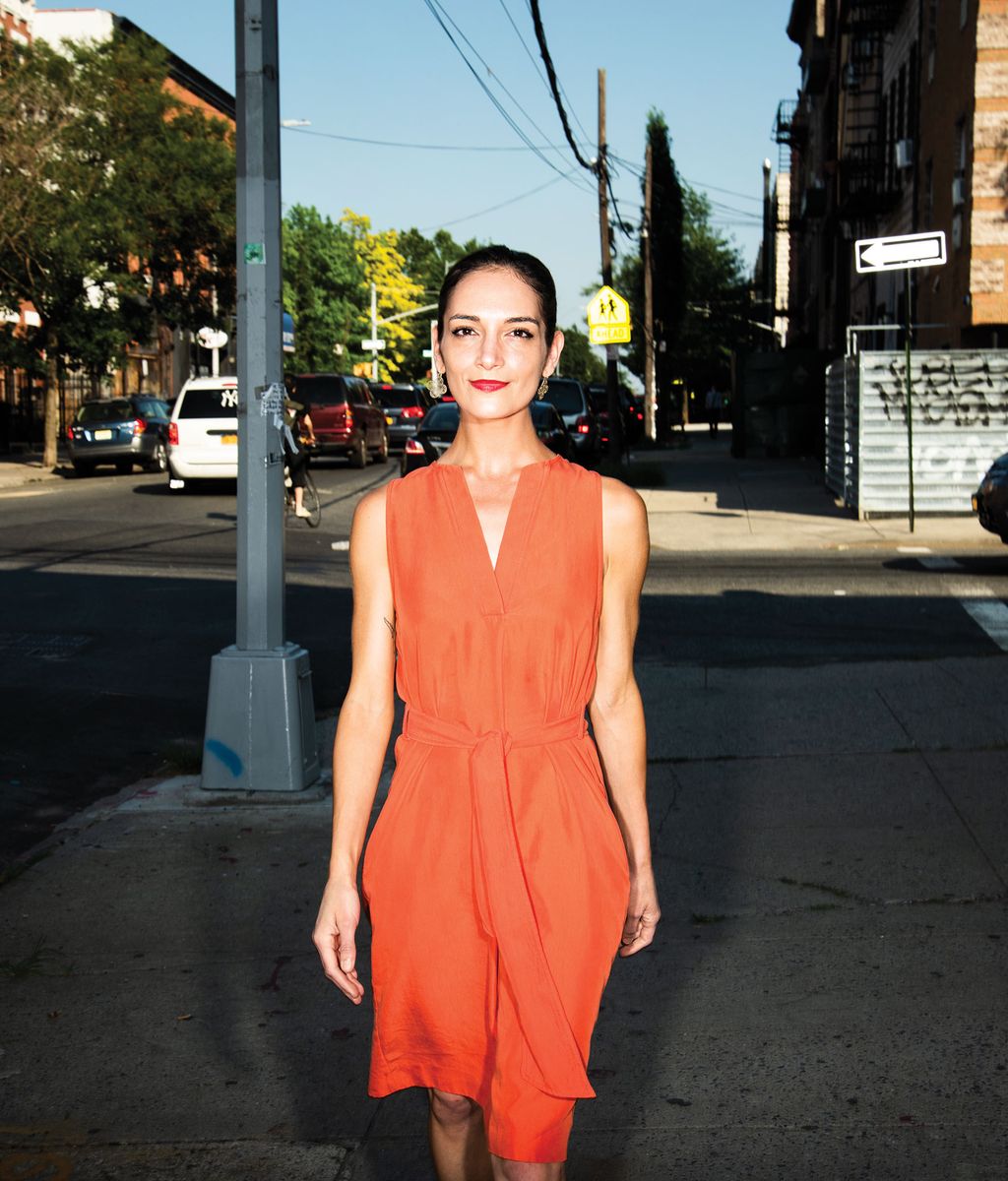 On the Sunday after Alexandria Ocasio-Cortez became the first self-described Democratic Socialist likely to claim a seat in Congress since Bernie Sanders, I spent the afternoon with Julia Salazar. Like Ocasio-Cortez, Salazar is a 20-something Latina Democratic Socialists of America member and first-time candidate taking on a centrist Boomer Democrat. In the state primary, she’ll go up against Martin Dilan, who’s represented the State Senate’s 18th District, in North Brooklyn, for 16 years. It’s the next step in an effort by the DSA to tip some of the country’s safest blue seats a little further to the left.

Salazar was knocking on doors of the Marcy Houses in Bed-Stuy, collecting some of the 1,000 signatures she’d need by July 9 to ensure her spot on the ballot. “Hi, I’m Julia, I live in the neighborhood, I’m running for State Senate in the election on September 13,” went her pitch. The first door she knocked on, the family invited her in to discuss tenants’ rights, health care, fixing the subway system.

She was accompanied by Laura Gabby, a 34-year-old carpenter recently elected trustee of Local 157 of the United Brotherhood of Carpenters. Both women had volunteered for the Ocasio-Cortez campaign. “Did you see this?” Gabby asked and showed me a tweet by Ocasio-Cortez with a picture of the shoes she wore knocking on doors, with holes in their soles, disputing those who said she’d prevailed for “demographic” reasons: “Respect the hustle. We won bc we out-worked the competition. Period.” It was 97 degrees out and seemed hotter in the stairwells. Gabby was in sneakers, shorts, and a Local 157 T-shirt; Salazar more formal in wedges, black pants, and a red top. “I’d be wearing less clothing if I weren’t running for office.” She regretted not bringing a second bottle of water, so, feeling a bit like a useless observer, I fetched us three Poland Springs from a bodega around the corner. The pair was having good luck: Lots of people were at home, staying in to keep cool, and were happy to provide their signatures.

“I don’t vote, but my wife does,” said one man on opening the door. “Oh, that’s the key word: Democrat. She’ll definitely vote for you.” It’s not that simple, of course, because Salazar is challenging an eight-term incumbent who previously represented the area for ten years on the City Council, where he was succeeded by his son, Erik, who now serves in the State Assembly. “The Dilans are my only state representatives,” Salazar said, “and over the last 16 years, Martin Dilan has taken an enormous amount of money from for-profit real-estate developers, and it’s directly translated into him supporting policies that really hurt tenants.” (“This is a decades’-old misinformation campaign to feed a long-standing political grudge,” said Dilan’s spokesperson. “To claim that one man is at fault for the affordable-housing crisis is absurd.”)

A few hours into canvassing, Salazar got a call from her campaign manager. She pumped her fist in elation. “Sorry, I can’t tell you what that was about, but I’m really happy.” The news broke later that night: Cynthia Nixon and Salazar would be endorsing each other. “I’m very hopeful that the same voters who vote for Nixon over Cuomo will vote for me over Dilan,” she said.

Salazar, 27, was born to politically conservative parents — her Colombian immigrant father was a cargo pilot and her Italian-American mother a flight attendant — and grew up in Florida. She moved to New York to attend Columbia, where she studied Middle Eastern history and became “class-conscious” while working as a nanny and house cleaner. Later, she led a rent strike against her building’s management company over unlivable conditions. Dealing with the legislators who make housing laws brought an epiphany: “We have to replace these people.”

“After college, I was trying to write. I started going to Jacobin reading groups,” Salazar said. The socialist journal now runs about 65 reading groups internationally, where members meet to discuss a selection of Jacobin articles and the broader issues they address. The first meeting she remembers attending was about the Global South.

“The core premise of the reading groups was to make sure people weren’t passive consumers of a magazine,” Bhaskar Sunkara, Jacobin’s editor, told me. “Not just like people reading n+1 alone in their rooms and thinking, I really like this writing.” Jacobin’s rising popularity has mirrored the return of socialist politics. In December, The Nation reported that “about 24,000 people — 70 to 80 percent of them under 35” had joined the DSA since Trump’s election.

When it comes to DSA fealty, Salazar’s roots are even deeper than Ocasio-Cortez’s. “Alexandria Ocasio-Cortez joined when she was seeking DSA’s endorsement,” explained Salazar. “She’s absolutely a Democratic Socialist, but she wasn’t organizing with DSA before.” Salazar, on the other hand, sits on the organizing committee of the socialist-feminist working group. “Julia represents the ideal life cycle of a socialist,” said Sunkara, “from an initial political awakening, into an intellectual phase with the reading groups, then joining the DSA, and now running for office.”

Salazar was on the subway on her way to her job at Jews for Racial & Economic Justice, where she organizes on policing issues, when she got a text from a friend: “Someone needs to run against Dilan.” She agreed, not realizing that her friend thought she was that somebody. It took weeks of coaxing before she decided to take leave from her day job and enter the race.

Since Ocasio-Cortez’s victory, many observers, including some DSA members, have compared DSA to the tea party for its potential to contest comfortable Democratic incumbents from the left. But a better analogy might be the Christian right, because it offers an entire culture. Instead of reading the Bible, they read Jacobin and Marx. Instead of protesting abortion, they undertake constant actions for tenants’ rights, single-payer health care, and immigrants’ rights. “DSA has an advantage,” said Michael Kinnucan, a DSA member who has also written for Jacobin, “because it’s not a purely electoral organization and there’s a real shared commitment to come up with both a theory and a practice of how to change things.” That commitment translates into volunteers on the ground at election time who diminish the need for fund-raising. Ocasio-Cortez was outspent by her opponent, Joe Crowley, nearly five to one.

It was clear on Sunday that Salazar was in friendly political territory. Outside the last of the buildings she and Gabby canvassed was a group of young men who asked her what she was up to. “I’m from the neighborhood and I’m running for State Senate,” she said. “Are you guys registered Democrats?” One of them replied, “I’m a Republican.” And they all laughed.

*This article appears in the July 9, 2018, issue of New York Magazine. Subscribe Now!

*A Salazar spokesperson provided details of Salazar’s upbringing and immigration status that subsequent reporting has shown to be incorrect. We have updated the story accordingly.

+Comments Leave a Comment
Knocking on Doors With Julia Salazar

THE FEED
7/25/2021
tokyo olympics
tokyo olympics
COVID Falls Out of Focus at the Pandemic Olympics — for Now
By Matt Stieb
The coverage of the games’ first weekend felt surprisingly normal. How long can this tone last?
7/25/2021
covid-19
covid-19
The Mask-Mandate Debate Is Back. Here’s What to Know.
By Chas Danner
Amid the Delta-fueled wave of U.S. COVID cases, universal mask mandates are back on the table and as politically fraught as ever.
7/25/2021
the inside game
the inside game
What Joe Biden’s 1988 White House Rivals Think of Him Now
By Gabriel Debenedetti
More than three decades have passed. Some things have changed — and many haven’t.

7/24/2021
delta variant
delta variant
How Bad Could the Delta Variant Get?
By David Wallace-Wells
The scientist Eric Topol explains why we can expect a dangerous wave of cases this fall.
7/24/2021
voting rights
voting rights
Democrats Can’t Out-Organize a Gerrymander — or Outflank Joe Manchin
By Ed Kilgore
Voting-rights advocates shouldn’t expect Biden to do the impossible in Congress, while Biden should understand there are laws you cannot out-organize.
7/24/2021
myths
myths
The Truman Show
By Paul Campos
How the 33rd president finagled his way to a post–White House fortune — and created a damaging precedent.
7/23/2021
2022 midterms
2022 midterms
Will Old or New Allegations Keep Herschel Walker Out of Georgia’s Senate Race?
By Ed Kilgore
A report suggests the problems associated with the football legend’s history of mental illness may not be safely in the past.
7/23/2021
olympics 2021
olympics 2021
U.S. Men’s Basketball Had a Rocky Olympics Start. I’m Still Excited.
By Eve Peyser
This year, Team USA taking home the gold is not a sure thing by any means. But there’s plenty for fans to look forward to.
7/23/2021
covid-19
covid-19
De Blasio Pushes for Private Employers to Implement COVID-19 Vaccine Mandates
By Nia Prater
During an interview with WNYC, de Blasio advocated for vaccine mandates, saying they would help more people get vaccinated against COVID-19.
7/23/2021
politics
politics
Yet Another Political Scion Runs for Office in Georgia
By Ed Kilgore
Bryan Miller, grandson of the late governor and senator Zell Miller, will try to do better than Matt Lieberman, Michelle Nunn, and Jason Carter.
7/23/2021
olympics 2021
olympics 2021
Welcome to the ‘What Are We Doing Here?’ Olympics
By Jen Chaney
The opening ceremony’s determined efforts to project normalcy amid the abnormal were occasionally lovely and frequently surreal.
7/23/2021
sports
sports
Cleveland Renames Baseball Team After Traffic Mascot
By Nia Prater
Good-bye, Indians; hello, Guardians.
7/23/2021
congress
congress
A Brief Guide to Congress’s Packed Summer Schedule
By Ed Kilgore
With conflicting reports on late-night talks and meaningless failed votes, it’s hard to track what Congress is doing. Here’s their pre-recess plan.
7/23/2021
business
business
The Backbreaking Work That Goes Into a Bag of Chips
By Sarah Jones
Frito-Lay workers strike for family time and against dangerous conditions.
7/23/2021
the discourse
the discourse
How Anti-Racist Is Ibram X. Kendi’s Anti-Racism?
By Eric Levitz
His approach to fighting racism contains glaring inconsistencies and contradictions that might undermine his own project.
7/23/2021
explainer
explainer
What We Know About the Dangerous Delta Variant
By Chas Danner and Paola Rosa-Aquino
The more transmissible COVID strain now accounts for an estimated 83 percent of new cases in the U.S.
7/23/2021