On July 27, 2016, Donald Trump denied Russia was the likely culprit in the email hacks, but also announced, “Russia, if you’re listening, I hope you’re able to find the 30,000 emails that are missing. I think that you’ll be rewarded mightily by our press.”

In what is possibly an astonishing coincidence, but probably not, that very night, according to the new indictments from the Department of Justice, Russian hackers “attempted after hours to spearphish for the first time email accounts at a domain hosted by a third-party provider and used by Clinton’s personal office. At or about the same time, they also targeted seventy-six email addresses at the domain for the Clinton campaign.” Trump asked Russia to hack his opponent, and Russia did “[f]or the first time,” as the indictment says.

Today’s latest, and almost certainly not last, indictments in the Russia scandal concern 12 Russian intelligence figures. The charge that Russians carried out the email theft is not a terribly surprising one, nor does it by itself suggest serious legal jeopardy for President Trump or his associates. Robert Mueller can’t arrest people in Russia, after all. The danger for Trump is the implication of collusion scattered throughout the indictments.

The indictment charges that the conspirators “received a request for stolen materials from a candidate for the U.S. Congress,” and “sent the candidate stolen documents.” The Wall Street Journal reported a year ago that “Guccifer 2.0,” one of the Russian hackers, communicated with Florida-based Republican operative Aaron Nevins. Nevins is not named in this indictment, but the revelation that a candidate also communicated with Russian hackers indicates yet another point of contact in a conspiracy that went beyond Trump’s campaign.

Stone admittedly engaged in direct communication with one of the indicted Russian agents. The indictment cites Stone’s contact with Guccifer 2.0: 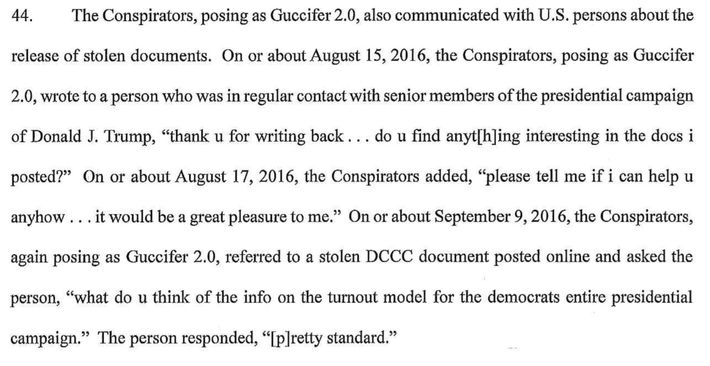 That certainly looks like acting as an accessory to a crime. Stone promises he will “never roll on Trump,” unlike John Dean, who fingered President Nixon for crimes during Watergate. The promise and the analogy both suggest that Stone has evidence of culpability between Trump and Russia.

Trump’s lawyer Rudy Giuliani writes, “The indictments Rod Rosenstein announced are good news for all Americans. The Russians are nailed. No Americans are involved. Time for Mueller to end this pursuit of the President and say President Trump is completely innocent.” The absurdity of this defense is so palpable that it underscores the sheer desperation of Trump’s legal defense. As Giuliani surely understands, the prosecution is building its case step by step, and the absence of formal charges against an individual in any one indictment hardly indicates they are in the clear. President Trump has been all but charged with collusion in this indictment.