On the plus side, he has successfully rebranded the same economic conditions he inherited as historic prosperity. If the recovery continues for the next two years, that fact alone might be enough to get Trump 270 Electoral College votes. Almost everything else will be working against him.

Trump, reports Sherman, “has increasingly turned to a shadow political operation” to advise him on campaign strategy, including Steve Bannon, Corey Lewandowski, David Bossie, Jason Miller; Sebastian Gorka; Breitbart Washington editor Matthew Boyle; and Sam Nunberg. This collection of talent would be well qualified and even impressive for a task like gathering for a weekend of video-gaming and Doritos. It is not the caliber of strategic minds you want running a campaign for any office higher than president of a local Confederate Civil War reenactors club.

This collection of angry and marginally employable hangers-on has some prestige because they allegedly, and perhaps in reality, retain some mystical connection to the Trump base. But here is a case where the media’s fixation with interpreting that base — in part because Trump won, in part because his supporters remain exotic and fascinating to consumers of liberal media, and in part because the white working class enjoys the broad presumption of representing “real” America — has created a general blindness to the president’s vulnerabilities.

Yes, Trump’s base retains its loyalty. Every president, even presidents who suffer massive landslide defeats, retains the vast majority of his supporters. It’s the marginal supporters that count. A hint of the difficulty Trump faces can be seen in the latest expression of support from Jon McNaughton, an artist whose kitschy propaganda has made him a favorite of the Trump cult:

My new painting – “Crossing the Swamp”
“Never give up. Never lower your light.
Never stop till the swamp is dry.” – Jon McNaughton
For a list of figures in the boat: https://t.co/ZIPdkBgcFU pic.twitter.com/CTPndvK5LM

The symbolism in a McNaughton painting is never very challenging. Here, as ever, we see Trump as the bold, purposeful leader pointing America to a better future. But notice what is all around Trump: a swamp! Trump famously promised to drain the swamp. The swamp in this painting is very extant and looks quite wet.

The overt message of the painting is that Trump is trying his best to navigate the swamp, but the implicit concession is that he has completely failed at the mission he promised to fulfill. The painting is attempting to deflect blame from Trump onto his enemies. But no president ever won reelection on a slogan of “It’s not his fault.”

Trump narrowly won election on the strength of his opponent’s wild unpopularity — a condition that may be repeated in 2020, but probably won’t — and a series of grandiose promises that pried away enough Obama voters to put him over the top. Trump has in fact fulfilled the promises most cherished by the orthodox conservative elements of his base: appointing conservative judges, passing a large business tax cut, reducing regulation of corporations. He has accomplished almost none of his “populist” promises.

There is no wall, and Mexico is not going to pay for one. The tax cut polls badly, and reinforces a theme that his administration has looked out for the rich. Trump is touting his vague deal with North Korea, but that agreement is being continuously exposed as utterly hollow. (A new report finds that North Korea appears to be continuing to manufacture new missiles capable of striking the United States, not to mention doing nothing to draw down its existing nuclear arsenal.) Trump is climbing down from the trade war after his base has absorbed more pain than it is willing to tolerate. At minimum, several members of his campaign team and/or family are likely to be convicted of various crimes. And his promise to replace Obamacare with something terrific that would cover everybody has collapsed with no hope for resuscitation.

A new poll by Axios indicates the overwhelming unpopularity of Trump’s handling of health care. Note, in particular, the “Never Hillary” Independent vote: 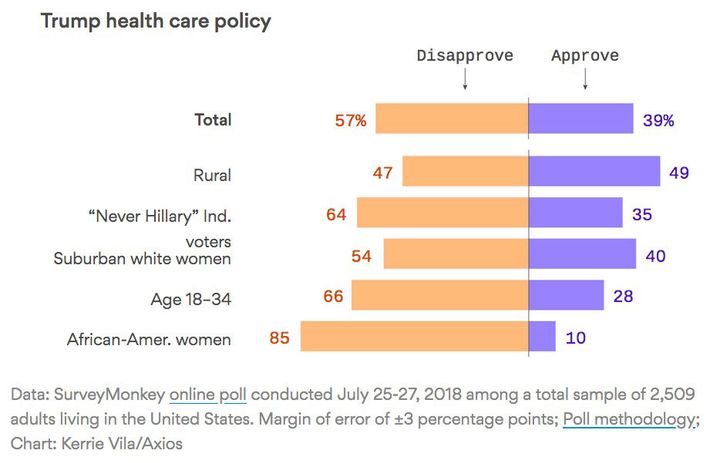 Socially-conservative-leaning independents, who had reservations about Trump but loathed his opponent even more, formed a crucial element of his coalition. He has lost them on health care.

Another implicit recognition of the bind in which Trump finds himself are Bannon’s lavish fantasies of abuse against the Democratic field. He characteristically finds an array of piquant metaphors to describe the humiliations he believes Trump will inflict upon his opponents. (“He’s going to cut through these guys like a scythe through grass. He’s going to mock and ridicule them. He’s going to crush them. He’s going to field-strip these guys.”)

Perhaps this will come to pass. Perhaps it will be enough. Yet the early obsession with utterly disqualifying the opposition reveals an implicit lack of confidence in their own product. Despite the slogan, Trump will not be running as a president who made America great, but as simply a hopefully-less-flawed alternative.

+Comments Leave a Comment
Trump Hasn’t Made America Great, and Reelection’s in Trouble