On Tuesday, Congress learned that federal officials had warned the Trump administration that its family-separation policy would likely subject migrant children to “traumatic psychological” injuries. Many reporters and pundits were (justifiably) shocked by this revelation.

And yet, the disclosure is the opposite of surprising. Of course separating thousands of small children from their parents — and then locking them in a (typically, understaffed) detention facility hundreds of miles from their homes, before making them represent themselves in arcane court proceedings — would result in some traumatic psychological injuries. And of course the Trump administration did not see this as a reason not to separate the families of asylum-seekers. The White House has tacitly admitted that it saw the measure as a form of deterrence; the whole point of the policy was to make seeking asylum in the United States appear more horrifying than living under the threat of a Central American drug cartel’s reprisals.

Simply put, for many of the most powerful people in the Executive branch, nonwhite foreigners have no rights that the United States is bound to respect.

Which is why, amid a global-migration crisis of historic proportions, the wealthiest country on planet Earth is preparing to slash refugee admissions by 40 percent next year — after already bringing that figure to a historic low in 2018. 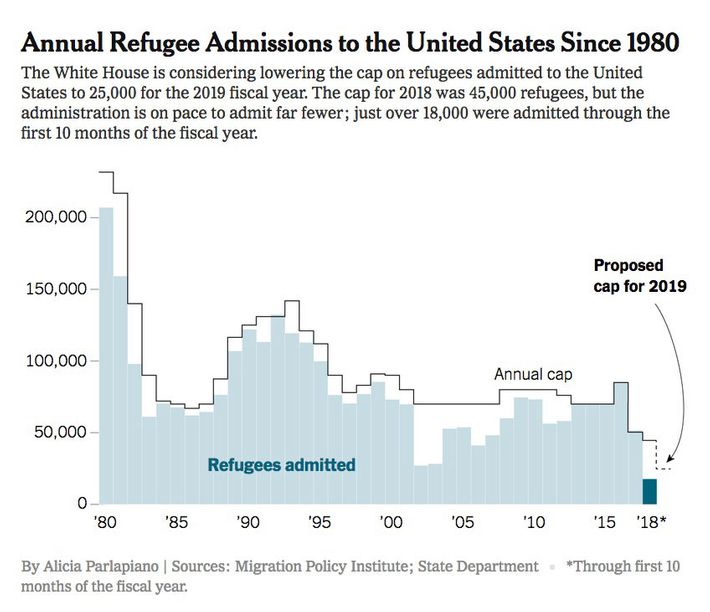 Trump’s current cap on annual refugee admissions is 45,000. That’s a lower cap than any America has enacted since the passage of the Refugee Act of 1980. But it was also much higher than Stephen Miller wanted. Now, the White House’s “nationalist” wing is on the cusp of condemning 20,000 additional would-be refugees to statelessness, so as to combat the (fictional) epidemic immigrant crime in the U.S. As the New York Times reports:

Last year, after a fierce internal battle that pitted Mr. Miller, who advocated a limit as low as 15,000, against officials at the Department of Homeland Security, the State Department and the Pentagon, Mr. Trump set the cap at 45,000, a historic low. Under one plan currently being discussed, no more than 25,000 refugees could be resettled in the United States next year, a cut of more than 40 percent from this year’s limit.

…Two of the three cabinet secretaries who pushed back last year — Rex W. Tillerson, the former secretary of state, and Elaine Duke, the former acting secretary of homeland security — have been replaced with officials who have worked hard to show their loyalty to the president: Mr. Pompeo and Kirstjen M. Nielsen, the secretary of homeland security and an ally of John F. Kelly, the chief of staff, who once said privately that his ideal refugee cap would be somewhere between zero and one.

It is far too generous to assume that this administration sees inflicting trauma on migrants as a bug of its immigration-enforcement policies, rather than a feature.