You shouldn’t cheat on your taxes. But if you do, it is extremely unlikely that the people in this building will do anything about it. Photo: Bill Clark/CQ-Roll Call,Inc.

For much of the last decade, the Republican Party has branded itself as a champion of fiscal responsibility and the rule of law — while doing everything in its power to help rich people steal from the Treasury.

Since taking Congress in 2011, the GOP has forced through a series of aggressive cuts to the Internal Revenue Service budget. Between 2010 and 2016, the number of individual tax returns filed in the U.S. increased by 7 percent, while IRS funding fell by 18 percent. That funding cut was exorbitantly expensive. Every $1 the government spends on enforcing tax compliance, it gets $6 back in recovered revenue, according to Treasury Department estimates.

And the spending cuts that Republicans imposed on the IRS fell disproportionately on tax-enforcement operations. Today, the IRS audits tax returns at a 42 percent lower rate than it did before Republicans took Congress in November 2010. Meanwhile, criminal referrals for tax evasion are becoming an endangered species: In 2012, the IRS referred 589 tax violations for criminal prosecution; in 2016, it referred just 328. 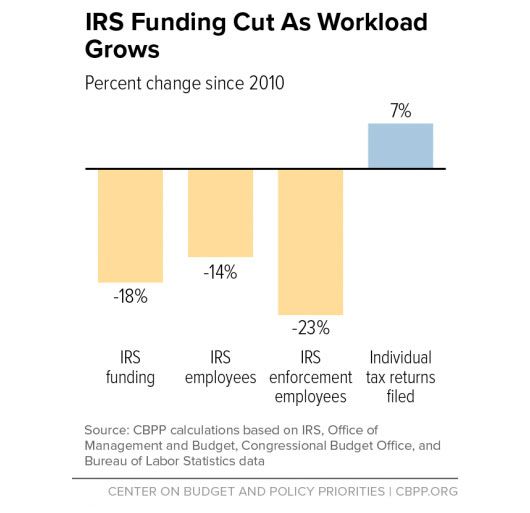 Much of this decline is a product of the massive reduction in the IRS’s enforcement staff. But that isn’t the whole story, as ProPublica reports:

Over time, crimes only tangentially related to taxes, such as drug trafficking and money laundering, have come to account for most of the agency’s cases.

“Due to budget cuts, attrition and a shift in focus, there’s been a collapse in the commitment to take on tax fraud,” said Chuck Pine, who used to be the third-ranking criminal enforcement officer at the IRS and is now a managing director at BDO Consulting. “I believe there are thousands of individuals who have U.S. tax obligations and are not complying with U.S. tax laws.”

…It doesn’t help that many agents prefer chasing flashier crimes than tax evasion. Rob Warren, a research associate at Catholic University who previously spent a quarter century at the IRS, interviewed 30 former special agents. He asked each agent which of their cases had been their favorite. The answers, Warren said, typically were only tangentially related to taxes.

“It was usually narcotics, Ponzi schemes, some public corruption,” Warren said. “Agents loved Ponzi cases because there was a real victim, an old lady or something like that.”

Last year, congressional Republicans attempted to divert the IRS’s attention away from policing the one percent’s tax evasion even further, by requiring the agency to invest more of its limited resources into cracking down on working poor Americans who improperly claim the Earned Income Tax Credit.

But even without that abominable proposal, the price of underfunding the IRS — and diverting it from its core mission of enforcement — is gargantuan. According to the agency’s estimates, American business owners are collectively shirking $125 billion in taxes each year.

Which is to say: By sabotaging the rule of law — and helping white-collar criminals move cash across America’s borders illegally — the Republican Party has effectively delivered a second, secret $1.25 trillion tax cut to American corporations.

But the reason this administration is keeping thousands of migrant children locked up in tent prisons is because it cares deeply about the rule of law, and the plight of working-class Americans.