Every product is independently selected by our editors. Things you buy through our links may earn us a commission.

Last Thursday, Brett Kavanaugh directed his rebuttal of Christine Blasey Ford’s sexual assault allegation squarely at the Republican base. In a partisan diatribe — without precedent in the history of Supreme Court confirmation hearings — Kavanaugh declared himself the victim of a smear campaign waged “on behalf of the Clintons” and funded by “millions of dollars in money from outside left-wing opposition groups.” He treated Democratic senators with open contempt, baldly lying in response to some of their questions — asking indignantly if his interlocutors ever got blackout drunk in response to others.

If Kavanaugh’s goal was to broaden support for his nomination among the general public — and/or, ease the concerns of ambivalent Senate moderates — then his performance made little sense. By portraying himself as an enemy of the “Clintons” and “the left,” Kavanaugh gave institutionalists a rationale for rejecting his nomination that didn’t even depend on the credibility of Ford’s claims. And yet, this tactic also gave the Republican base more cause for insisting on his confirmation, as opposed to that of a conservative judge like him. After Kavanaugh’s searing testimony, replacing him with Amy Coney Barrett wouldn’t be a mere inconvenience, but an act of capitulation to Hillary Clinton’s goons.

For the moment, it looks like Kavanaugh’s gamble paid off. After Ford’s testimony, many GOP operatives and commentators began suggesting that they might have to throw Brett overboard; after Kavanaugh’s angry, weepy tirade against the Democratic inquisition, the party rallied behind him. True, Jeff Flake forced a few more days of investigation into the allegations against Kavanaugh, but, by all appearances, that FBI inquiry is for display only.

And now, a new CBS News/YouGov poll confirms that Kavanaugh’s performance had its desired effect on the GOP base. Last week, 69 percent of GOP voters said the Senate should confirm Kavanaugh; after Thursday’s hearing, that figure rose to 75 percent. Meanwhile, 46 percent of Republicans say they would be “angry” (as opposed to merely “disappointed”) if Kavanaugh was rejected.

But among the public writ large, Thursday’s events appear to have had the opposite effect. Last week, 32 percent of voters favored Kavanaugh’s confirmation, 30 percent opposed, while the rest felt it too soon to say. Now, 37 percent oppose, while 35 percent support. This flip to (very narrow) plurality opposition was driven by an eight-point increase in Democratic voters’ disapproval of Kavanaugh. 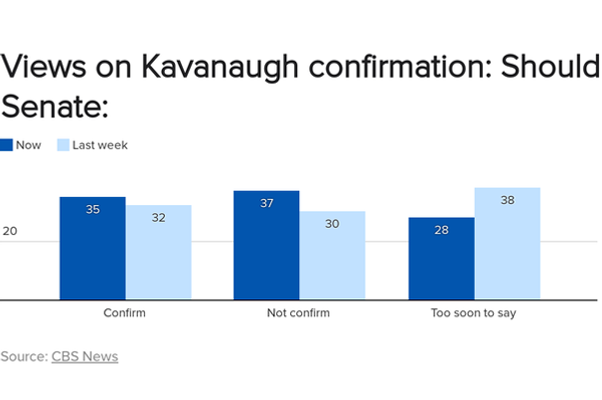 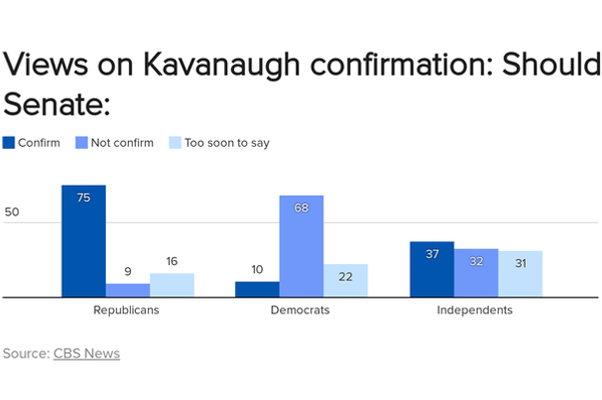 Those findings comport with a broader polling trend that began well before Ford’s allegations came to light: The longer Kavanaugh has been in the public eye, the less popular he has become.

Delaying the Kavanaugh vote by a week means one more week for polls to come in, and the polling trend isn't great:https://t.co/kxParqjCwF pic.twitter.com/8ITt15py1J

Nevertheless, there’s reason to believe that Kavanaugh’s declining net support over the past few days was informed by Ford’s testimony, and not just a continuation of the long-run trend. A YouGov poll published over the weekend found that plurality of Americans found Ford more credible. As the Huffington Post’s Ariel Edwards-Levy noted:

All of which is to say: Kavanaugh’s decision to pitch his case at the GOP base last Thursday succeeded in making it more politically difficult for Republican senators to reject his nomination. But that victory might come at a cost to vulnerable Republican officeholders this fall, as it threatens to make Kavanaugh’s confirmation into a wedge issue — particularly, in battleground House districts, where college-educated women can make or break Paul Ryan’s majority.

Every product is independently selected by our editors. Things you buy through our links may earn us a commission.

THE FEED
4:13 p.m.
celebrations
celebrations
What Biden Has Planned for His July 4 ‘Independence’ From COVID Party
By Matt Stieb
The U.S. probably won’t hit Biden’s goal to vaccinate 70 percent of adults by July 4, but that won’t keep him from throwing a party on the South Lawn.
4:10 p.m.
politics
politics
Biden and Putin Played Nice Today
By Nia Prater
The two leaders met following recent Russian meddling in American elections and U.S. condemnations of the Kremlin’s crackdowns.
1:29 p.m.
donald trump
donald trump
Could Trump Become Speaker of the House?
By Ed Kilgore
This bizarre scenario is technically possible, but fantasies about Trump returning to the White House via the Speakership are extremely far-fetched.

11:00 a.m.
infrastructure
infrastructure
Democrats Are Locked In a Staring Contest Over Infrastructure
By Eric Levitz
The question is whether liberals or moderates will blink first.
10:10 a.m.
nyc mayoral race
nyc mayoral race
All the Endorsements in the NYC Mayoral Race
By Nia Prater
With the June 22 primary approaching, Democratic mayoral candidates are racking up endorsements from politicians, organizations, and celebrities.
8:00 a.m.
department of justice
department of justice
Trump DOJ’s Secret Subpoenas and Data Seizures: What We Know
By Chas Danner
The Trump Justice Department went to unprecedented lengths to hunt down leakers, seizing records from reporters, Democrats, and a White House counsel.
7:00 a.m.
life after warming
life after warming
California’s Last Fire Season Was a Historic Disaster. This One Could Be Worse.
By David Wallace-Wells
The conditions are already set for eclipsing recent records — which themselves would have been unthinkable not long ago.
12:05 a.m.
sports
sports
A Second Marathon Is Coming to New York City
By Matt Stieb
After years of lobbying the city, a runner’s organization has secured the permits for the Brooklyn Marathon to be held in April 2022.
6/15/2021
games
games
This Was the Biggest Challenge of Kevin Durant’s Career
By Will Leitch
Maybe he can quiet some of the haters after almost single-handedly defeating the Bucks in Game Five.
6/15/2021
politics
politics
Democrats Move Ahead With Plan to Pass Rest of Biden Agenda
By Ed Kilgore
Whether or not an infrastructure deal is cut with Republicans.
6/15/2021
business
business
Amazon Is Too Large to Sustain
By Sarah Jones
The company’s growth outpaces its ability to care for its workforce.
6/15/2021
politics
politics
Trump Tried to Force DOJ to Back His 2020 Election Coup
By Ed Kilgore
Long after the 2020 election was decided, Trump relentlessly used all the mechanisms available to the executive branch to overturn his loss.
6/15/2021
false equivalence
false equivalence
Ilhan Omar and Marjorie Taylor Greene Are Not Equivalent
By Ed Kilgore
It’s lazily convenient to lump these two “extremists” together. But there’s no comparison in what they’ve said and how they’ve dealt with criticism.
6/15/2021
covid-19
covid-19
Life As You Knew It Is Coming Back to New York
By Paola Rosa-Aquino
Cuomo lifts COVID restrictions on almost all businesses.
6/15/2021
explainer
explainer
What We Know About the Dangerous COVID B.1.617.2 Delta Variant
By Chas Danner and Paola Rosa-Aquino
The more transmissible strain, originally discovered in India, has now spread to more than 60 countries. It could soon become dominant in the U.S.
6/15/2021
the city politic
the city politic
Tali Farhadian Weinstein Donated $8.2 Million to Her Own Campaign
By James D. Walsh
The Manhattan DA candidate’s personal contributions dwarf the millions she has raised from Wall Street mega-donors.
6/15/2021
pivot
pivot
Why the CEO-Worker Pay Gap Is Wider Than Ever
By Intelligencer Staff
A clubby corporate atmosphere is a major contributing cause.
6/15/2021

Was anyone crying out for more fireworks?

Not to be outdone, Hearing reports that @NYGovCuomo is coordinating a fireworks display tonight in towns throughout New York State to celebrate milestone of hitting a 70% Covid vaccination rate.

Yesterday, @NYCMayor announced a ticker tape parade for essential workers July 7.
—@ZackFinkNews
6/15/2021
politics
politics
With a Week to Go, Eric Adams Turns Fire on Kathryn Garcia
By Nia Prater
After slugging it out with Andrew Yang for No. 1, the frontrunner finds a new nemesis.
6/15/2021
2021 elections
2021 elections
Virginia Is in for a Close, Expensive Governor’s Race
By Ed Kilgore
Terry McAuliffe has an edge, as Virginia has been trending blue. But the “businessman outsider” Glenn Youngkin has the money to keep it tight.
6/15/2021

In a report sent to the White House earlier this month that has not been made public, Ms. Haaland recommended that Mr. Biden reinstate the original boundaries, which included millions of acres at Bears Ears National Monument and Grand Staircase-Escalante, two rugged and pristine expanses in Utah defined by red rock canyons, rich wildlife and archaeological treasures.

A spokeswoman for Gov. Spencer J. Cox of Utah confirmed Monday that Ms. Haaland had made the recommendations.

Haaland Wants to Restore Environmental Safeguards for Three National Monuments
—New York Times
6/15/2021
media
media
Out-of-Touch Media Elites Ignore Working-Class Biden Voters
By Eric Levitz
George Packer’s breakdown of America’s political tribes overlooks the one that just chose the president.
6/14/2021
cdc
cdc
U.S. to Ban Dog Importations From 113 Countries for One Year
By Matt Stieb
The move comes in the wake of an increase in puppies arriving in the U.S. with falsified rabies certificates.
6/14/2021
politics
politics
Marjorie Taylor Greene Apologizes for Holocaust Gaffe, But Not for Her Ignorance
By Ed Kilgore
More than three weeks after her deeply offensive comparison of mask mandates to the Holocaust, Greene shows how little she’s learned.
6/14/2021

Another poll shows Eric Adams ahead

Adams: 26%
Wiley: 20%
Yang: 16%
Garcia: 14%
Stringer: 8%https://t.co/hPFXrNPRGG
—@freedlander
6/14/2021
covid-19
covid-19
U.K. Delays End of Lockdown Amid Spread of Delta COVID Variant
By Paola Rosa-Aquino
Prime Minister Boris Johnson has pushed back the easing of pandemic restrictions in the country to July 19.
6/14/2021
politics
politics
Reality Winner Is Finally Out of Prison
By Sarah Jones
The NSA contractor remains in federal custody in a reentry program after getting five years behind bars for leaking secrets.
6/14/2021
supreme court
supreme court
McConnell All But Admits He Would Never Confirm a Biden Supreme Court Pick
By Ed Kilgore
With McConnell pledging obstruction, Democrats need to make the Supreme Court a major campaign issue for the midterms.