In 2016, Donald Trump claimed that America’s presidential election would determine nothing less than whether a proven criminal would be sent to jail — or the Oval Office. In 2020, that might actually be the case.

On Friday, federal prosecutors released a sentencing recommendation for Trump’s longtime lawyer Michael Cohen — and, in so doing, implicated the president in a federal crime, and suggested that he might well be implicated in several more.

In August, Cohen pleaded guilty to multiple campaign-finance violations, saying that he had been involved in an illicit scheme to aid Donald Trump’s presidential campaign by providing hush payments to two of the GOP nominee’s alleged ex-lovers in fall 2016 (such hush payments would have constituted undisclosed, illegally large “in-kind” contributions to the Trump campaign). Cohen also claimed that Trump had been the mastermind behind said illicit scheme.

In the sentencing memo Friday, prosecutors formally endorsed Cohen’s story, writing, “Cohen himself has now admitted, with respect to both payments, he acted in coordination with and at the direction of Individual-1” — a.k.a. the president.

Thus, it’s quite plausible that the only reason Donald Trump has not been indicted on federal charges is because he is the president. The conventional wisdom among legal scholars holds that the commander-in-chief cannot be indicted so long as he or she remains in office. That means that if Trump loses in 2020, he could promptly find himself in legal jeopardy. If he wins, he could forever escape all legal liability for his part in Cohen’s crimes — the statute of limitations on a campaign-finance violation committed in 2016 would likely expire in 2022.

Granted, even if Trump were a private citizen, convicting him of violating campaign-finance law would be difficult, as prosecutors would have to prove that the mogul intended the hush-money payments to benefit him politically (as opposed to just maritally). But there is some reason to think that prosecutors have evidence that speaks to Trump’s intent. And it appears more likely than not that prosecutors will implicate “Individual-1” in additional crimes. As Barry Berke, Noah Bookbinder, and Norman Eisen explain in the New York Times:

The special counsel focuses [in his sentencing memo] on Mr. Cohen’s contacts with people connected to the White House in 2017 and 2018, possibly further implicating the president and others in his orbit in conspiracy to obstruct justice or to suborn perjury. Mr. Mueller specifically mentions that Mr. Cohen provided invaluable insight into the “preparing and circulating” of his testimony to Congress — and if others, including the president, knew about the false testimony or encouraged it in any way, they would be at substantial legal risk.

Mr. Trump’s legal woes do not end there. The special counsel also advanced the president’s potential exposure under the Foreign Corrupt Practices Act for activities relating to a potential Trump Tower Moscow. Mr. Mueller noted that the Moscow project was a lucrative business opportunity that actively sought Russian government approval, and that the unnamed Russian told Mr. Cohen that there was “no bigger warranty in any project than the consent” of Mr. Putin.

And this says nothing of the new evidence of collusion between the Trump campaign and Russian government that’s sprinkled throughout Mueller’s memo. These lines of inquiry may not bear prosecutable fruit, but Cohen’s conviction alone should be sufficient for putting the fear of a post-presidential indictment into Trump.

It is true that the president could still be impeached instead of indicted. But even if Mueller’s investigation ultimately links the president to more crimes — and demonstrates that his 2016 campaign had illicit ties to Russia — it is hard to imagine a critical mass of Republican senators voting to remove Trump from office. There aren’t many things that this president has done with diligence and discipline, but delegitimizing the Mueller probe in the eyes of his base is one. And given how many blatant abuses of power that base has already witnessed — and how unwavering the Trumpian proletariat’s support for their dear leader has been through it all — it’s hard to see the president’s approval rating dropping to Nixonian levels, no matter what Mueller’s “WITCH HUNT” yields.

All of which is to say: There is a significant chance that in 2020, Donald Trump will be running for a second-term — and from the law — simultaneously. And if that proves to be the case, the consequences for American political life could be dire.

For Trump, the costs of losing the 2016 election were largely superficial — by most accounts, the original aim of the reality television star’s campaign was publicity, not the presidency. And yet, the mere threat of narcissistic injury was enough to inspire Trump to sow distrust in the legitimacy of the election. In July 2016, the GOP nominee told a crowd in Pennsylvania that “the only way we can lose, in my opinion … is if cheating goes on.” One month later, he told supporters in North Carolina that if the state’s voter-ID law remained suspended, Clinton voters would go to the polls “15 times” each. Shortly thereafter, Trump’s first general-election ad hit the airwaves — this was its opening image: 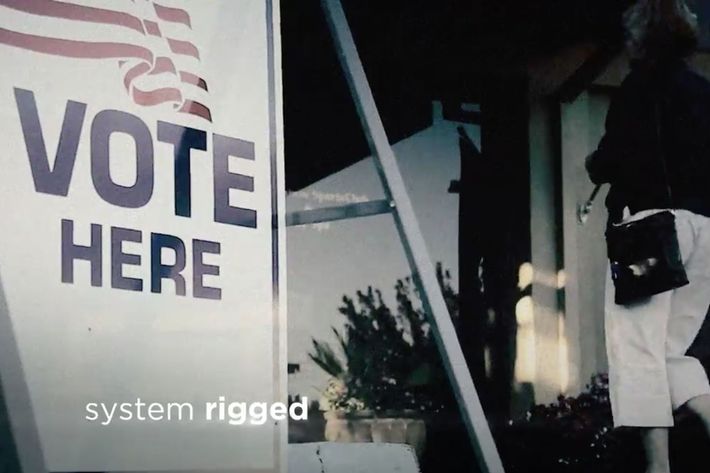 Trump never stopped disputing the integrity of the election, even after he had won. Instead, the president-elect claimed, repeatedly, that millions of illegal ballots had robbed him of his rightful popular vote victory.

In this year’s elections, Trump had far less at stake. He wasn’t on the ballot himself, and a Democratic takeover of the House was already close to a foregone conclusion by midsummer. And yet, to boost his party’s 2018 prospects, the president proved willing to fabricate an impending “invasion” by migrant terrorists and gangsters; suggest that said invasion was being organized by the Democratic Party as part of an elaborate bid to steal the midterm elections; persist in fomenting such incendiary conspiracy theories even after they inspired one of his supporters to attempt the assassination of many leading Democrats; and deploy thousands of U.S. troops to the southern border, so as to give his big lie an extra measure of credibility.

Even before Mueller’s latest revelations, this behavior was sufficient to prompt widespread anxiety about what Trump would be willing to do to win reelection, and/or what he might incite “Second Amendment people” to do should he lose it. If the president’s personal freedom ends up on the ballot in 2020, a lot of worse-case-scenarios become more plausible.

Some progressives have worried that Trump might actually be able to turn the threat of a post-election indictment into a source of electoral strength. The idea being: If the sitting president can (somewhat credibly) campaign against a deep-state plot to “lock him up,” then the Democratic nominee will struggle to focus attention on Trump’s policy failures and substantive betrayals of working people, where he is arguably most vulnerable. But that particular fear seems unfounded. Trump’s myriad scandals haven’t alienated the GOP base, but they appear to have damaged him with just about everyone else. And anyhow, there are plenty of ways to insert policy arguments into a campaign dominated by an incumbent’s corruption scandals (simply pointing out the president appears too consumed by his own problems to worry about yours could suffice).

Should the Mueller probe continue to implicate the president in unsavory and illegal activities, the Democratic Party’s 2020 prospects will improve; but America’s prospects of averting a democratic crisis and/or heightened levels of political violence won’t.