A thousand infrastructure weeks have come and gone, and Donald Trump still doesn’t have a plan for rebuilding America’s “crumbling roads and bridges.” Over his first two years in office, the president has unveiled several proposals that were branded as such. But these were all, in fact, schemes for delivering tax breaks to wealthy developers, loosening environmental regulations, and transferring resources from urban areas to rural ones — all without increasing infrastructure spending enough to offset the cuts proposed in the White House’s budget.

Nevertheless, there’s reason to believe that Trump is interested in signing his name to a genuine infrastructure stimulus. A pledge to do so was, after all, a cornerstone of his 2016 campaign. And everything in the president’s biography suggests that he’s perfectly comfortable sacrificing fiscal discipline for the sake of investing in new construction. The primary obstacle has been congressional Republicans, whose governing philosophy all but forbids public investment in anything that can’t be used to kill people overseas. And since Trump has been wholly reliant on either Mitch McConnell and Paul Ryan — or the kind of “populists” who’d rather build prisons for child migrants then new roads — for legislative aid, he’s been incapable of forcing Congress to bend in his heterodox direction.

But next January, that could change. With Democrats in control of the House, and the president’s political advisers (presumably) interested in broadening his support ahead of the 2020 campaign, one can almost see how a grand bargain on infrastructure might take shape — if one stipulates that the Democratic Party is interested in self-sabotage, anyway.

There are a lot of productive things that Team Blue can do with one chamber of Congress. Helping Donald Trump secure a popular, bipartisan policy victory ahead of his reelection bid is not one of them. And this is especially true when one considers how substantively flawed any infrastructure bill backed by Mitch McConnell is certain to be.

Fortunately, Chuck Schumer appears to understand all this. Rather than trying to meet the president halfway (as has been his wont), the Senate Minority Leader has made Trump an offer he can’t accept. In an op-ed for the Washington Post, Schumer tells the president that, when it comes to an infrastructure deal, he can either go green, or go home:

Now that Democrats will soon control one branch of Congress, President Trump is again signaling that infrastructure could be an area of compromise. We agree, but if the president wanted to earn Democratic support in the Senate, any infrastructure bill would have to include policies and funding that help transition our country to a clean-energy economy and mitigate the risks the United States already faces from climate change.

… Truthfully, infrastructure investment has been a priority for Democrats for decades. That’s why Democrats last year proposed a trillion-dollar infrastructure bill, which the president ignored. Our plan suggested bold new investments in clean energy and climate resiliency, one step on our path to a 100 percent clean-energy economy. And we could finance the bill entirely by reversing the worst giveaways in the Trump tax bill, those gifted to multinational corporations and the wealthiest of the wealthiest.

… We should provide permanent tax credits for clean-energy production and storage, electric vehicles, and energy-efficient homes. We should invest in conservation, wildlife and deferred maintenance on our public lands, because this can both mitigate the impacts of climate change and grow the outdoor economy. We should significantly reduce the release of methane pollution from domestic energy production. And we have to reduce the amount of carbon we release into the atmosphere. All of these policies can and will create good-paying green jobs.

This is a sound approach on (at least) three levels. First, it allows Democrats to obstruct a popular policy idea — by baiting Republicans into obstructing an even more popular one. The GOP is never going to sign onto an infrastructure package that raises oil CEOs’ taxes to subsidize their competitors. But the American public would be quite happy to. A Data for Progress/YouGov Blue survey from earlier this year found majority support for a wide variety of climate policies, including a massive green infrastructure stimulus. Meanwhile, Gallup recently found that 62 percent of voters believe that the government is doing too little to protect the environment — while 57 percent want policymakers to prioritize environmental preservation over economic growth. And soaking the rich remains as popular as ever. 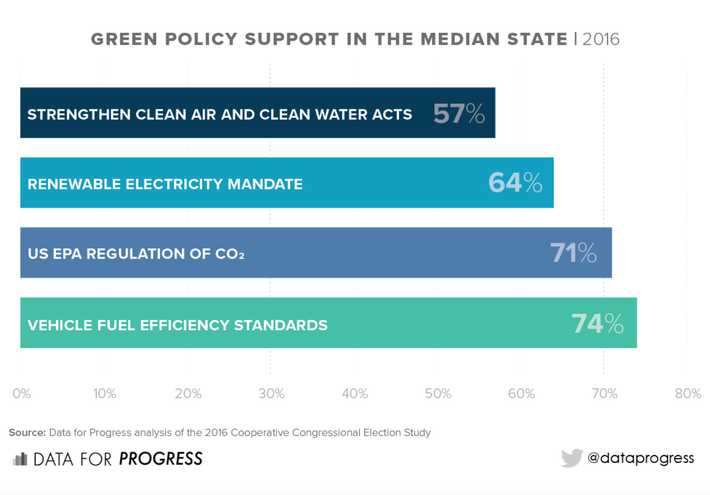 Second, it sends a signal to the party’s growing left flank and activist base that the Democratic leadership welcomes the former’s ideas and energy. In her first few weeks as congresswoman-elect, Alexandria Ocasio-Cortez has made a “green new deal” her signature issue; now, so has DSA’s second-most-reviled New York Democrat.

Finally, it puts “green jobs” near the top of the next Democratic government’s agenda. Which is a welcome a development, given the party’s failure to make legislative progress on climate the last go-round.

Schumer has done little over the past two years to earn a reputation for political savvy. But infrastructure is now, officially, one issue that the Senate Minority Leader didn’t Chuck up.