Matt Stoller, who has repeatedly dismissed the Obama administration as a failure, tells the New York Times that candidates who sound like Obama will face suspicion from voters. “We tried that and it didn’t work,” Stoller said. “And it’s pretty obvious to everybody now that it didn’t work.” By “everybody” he apparently means the 5 percent of Democrats who don’t approve of Obama.

It may well be the case that an influential progressive intellectual like Stoller, in observing his own milieu, believes more or less everybody in the Democratic Party considers Obama a failure. Barack Obama is a figure of near uniform approval among the Democratic voting base, yet he is a subject of bitter contention among the progressive intelligentsia. The socialist left believes the Democratic Party took a sharp right turn away from the New Deal in the 1970s, and has never returned. This premise, which is at best simplistic and at worst completely erroneous, is used to indict every Democratic president since that time for the identical charge of “neoliberal” betrayal of the party’s Rooseveltian creed.

A recent Washington Post op-ed by Lawrence Glickman helpfully illustrates what makes this accusation so maddening. Glickman charges all the post-Johnson Democratic presidents with a “surprising reluctance to celebrate Roosevelt or the New Deal.” This reluctance is supposedly in contrast with the enthusiastic pro-Roosevelt leanings of socialists like Bernie Sanders and Alexandria Ocasio-Cortez, who of course represent the party’s return to the old, true faith.

It’s difficult to substantiate a charge like “reluctance to celebrate Roosevelt or the New Deal,” and Glickman doesn’t really try. But it’s worth pointing out that Obama has celebrated Roosevelt many times — including his 2008 convention speech (“We are the party of Roosevelt,”) the 2010 signing of his health-care law, and his 2012 convention speech (“It will require common effort, shared responsibility, and the kind of bold, persistent experimentation that Franklin Roosevelt pursued during the only crisis worse than this one”). I’m not sure where Glickman gets the idea that Obama refused to draw on Roosevelt’s legacy, but it doesn’t seem to have any basis in reality.

But the place where Glickman’s argument really exposes its faulty premise is where he provides some concrete examples of the kinds of policies good, New Deal Democrats support, in alleged contrast the the weak-tea neoliberalism of the recent past. “Growing support for a Green New Deal, Medicare-for-all, progressive taxation and corporate regulation,” he writes, “suggests that many members of the Democratic Party are once again embracing the Rooseveltian vision of activist government that promotes freedom, opportunity and justice for ordinary Americans.”

This helpfully specific list of policies really clarifies the underlying errors of his critique. Do you know who not only supported but actually enacted major reforms in all these areas? Neoliberal sellout Barack Obama. Let’s go through his list in order:

Green New Deal: Obama passed into law the largest green energy subsidies in history, as a portion of his stimulus bill that also happened to be as costly, on an inflation-adjusted basis, as the stimulus spending in the New Deal. Obama reinforced those reforms — which created a viable market for solar and wind power, electric cars, and battery storage out of virtually nothing — with a broad suite of regulations that drove a historic drop in carbon emissions.

Medicare for All: Obama did not successfully institute single-payer health insurance for all Americans. But, then neither did New Deal Democrats Roosevelt, Harry Truman, John Kennedy, or Lyndon Johnson. What Obama did pull off, after all those previous Democrats proved unable to add health insurance to the welfare state, was a historic expansion in coverage, through a combination of Medicaid and new subsidized and regulated markets.

Progressive taxation: Obama cut taxes for the bottom income brackets and raised it for the top. The result was a direct transfer of income from top to bottom (see below). 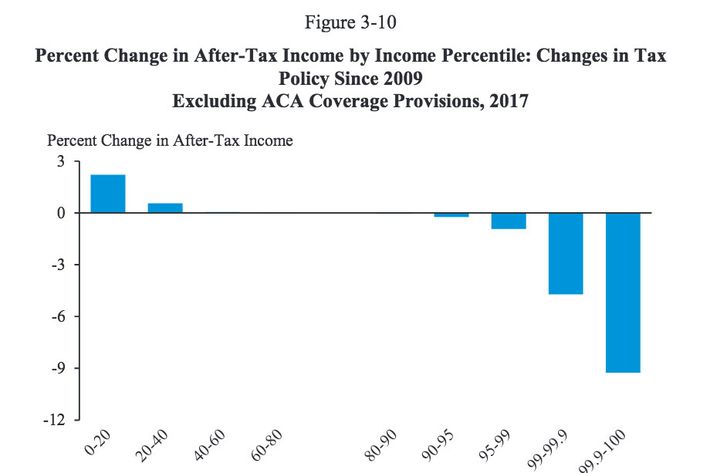 Corporate regulation: Obama passed the Dodd-Frank reforms, the first major curtailment of the financial industry since Roosevelt’s time. His administration created the Consumer Financial Protection Bureau, rolled back private control of college loans, created net neutrality, cracked down on for-profit colleges, and beefed up workplace safety regulation and enforcement, among other reforms.

It might seem bizarre that Obama’s record in these areas could be so thoroughly forgotten that somebody like Glickman — a history professor, no less! — could casually describe a list of things accomplished as though they were goals no recent Democrats even bothered to attempt. That he can do so is a testament to the left’s persistent negativity throughout Obama’s presidency. They’ve repeated their complaints about Obama’s achievements so many times they’ve forgotten everything he did.

THE FEED
4:06 p.m.
all the live long day
all the live long day
Why America’s Railroads Refuse to Give Their Workers Paid Leave
By Eric Levitz
Wall Street’s new robber barons can’t make the trains run on time.
2:23 p.m.
early and often
early and often
Herschel Walker Can’t Shake His Texas Residency Problem
By Ed Kilgore
The GOP Senate candidate is being hit with renewed questions about his residency, which underscore claims that his heroic image in Georgia is hollow.
12:16 p.m.
politics
politics
Hakeem Jeffries Elected As Next Leader of House Democrats
By Nia Prater
The 52-year-old congressman will become the first Black person to lead a congressional party.