On Wednesday, Homeland Security Secretary Kirstjen Nielsen said that the White House could not accept the status quo level of border control funding (for the sake of ending the government shutdown) because “this is not a status quo situation. We are in a crisis situation.”

Nielsen was half-right. The United States is in a crisis — but one entirely of the Trump administration’s own making.

It is true that an influx of Central American asylum seekers has tested our government’s capacity for detaining migrants, and that this has contributed to a significant number of crimes against humanity. But these problems would not exist if the Trump administration stopped insisting on detaining asylum seekers while they await their days in court (there are alternative methods of preventing such migrants from absconding into the middle of the country in the interim). More fundamentally, the problem would not exist if the Trump administration decided that illegal immigration wasn’t actually a top-tier threat to the safety and well-being of the American people. Which it isn’t.

Contra Trump, undocumented immigrants do not represent a significant threat to public safety: States with higher concentrations of undocumented immigrants tend to have lower rates of violent crime — and this correlation persists even when controlling for a given state’s median age, level of urbanization, and rate of unemployment or incarceration. Meanwhile, as the American population ages, the future of American economic growth and the long-term viability of Social Security likely depends on an infusion of foreign workers.

What’s more, even if illegal immigration were a scourge, it still wouldn’t make sense to suggest that America is currently experiencing a “crisis” of illegal immigration. Apprehensions for illegal border crossing are in long-term decline. And that trend isn’t the product of weakened border enforcement. Quite the contrary: Over the course of the Obama presidency, federal spending on border security increased by more than 37 percent, the number of undocumented immigrants in the U.S. labor force held steady, and the number formally deported by the American government skyrocketed. 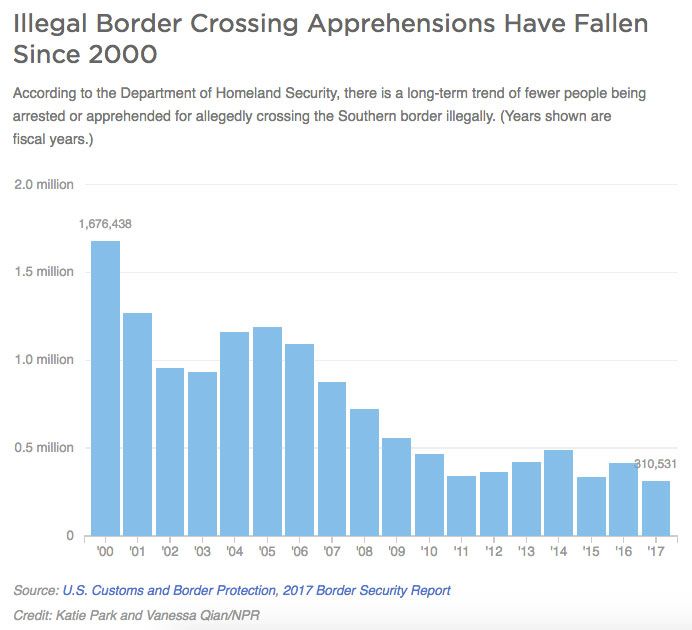 In truth, it wasn’t a crisis of border insecurity that compelled Trump to shutter the federal government because Democrats refused to fund his wall; rather, it was a crisis of personal insecurity. The president turned against a continuing resolution after taking heat from the television and radio personalities whose praise he values above all else. Asked Wednesday why he wouldn’t support reopening branches of the federal government that don’t deal directly with immigration, the president reportedly replied, “I would look foolish if I did that.”

But what makes Nielsen’s remark truly Orwellian is that it is an argument for exacerbating an actual crisis in the name of a fictional one. Central American asylum seekers aren’t driving thousands of American families into financial hardship, depriving American veterans of much-needed medical care, or jeopardizing the health of American children — but the government shutdown is. As the New York Times editorial board observes:

An estimated 800,000 federal workers have had their lives upended by this latest presidential temper tantrum … Routine screenings by the Food and Drug Administration are being put on hold, and the Federal Communications Commission is set to halt most of its operations on Thursday. The situation on Indian lands is about to get dire. The list goes on and on.

For the workers directly affected, among those facing the greatest economic uncertainty are contractors, who make up more than 40 percent of the government workforce. This includes not only white-collar positions, but also thousands of blue-collar jobs, such as janitors and security guards. Unlike regular government employees, many contractors may not be compensated for lost time. They could simply lose the income.

This litany demonstrates that Trump’s position is substantively indefensible. It also, tragically, suggests that his gambit might be more tactically sound than his critics wish to believe. To be sure, from a medium-term perspective, it makes no strategic sense for an already unpopular president to sabotage the functioning of his own administration to court Rush Limbaugh’s approval. But it does seem possible that Trump could eventually “win” the shutdown fight on the strength of his sociopathy.

In concrete terms, it makes little difference whether Congress appropriates a few billion dollars in funding for Trump’s border wall. Beyond the fact that the wall is likely one of the most innocuous (and ineffective) forms of border militarization the administration could pursue, it isn’t even clear that the White House would succeed in spending the appropriated funds before Trump exited office; according to the Times, the administration has spent “less than 10 percent” of the border security funds that Congress allocated over the past 12 months.

Thus, the stakes of the standoff on wall funding are primarily symbolic and strategic. The wall would function as a monument to nativists’ triumph in a culture war. And by allowing Trump to break their will with a shutdown, Democrats would encourage future hostage-taking.

Those are very real stakes. But they’re also much more abstract than the consequences of a prolonged shutdown. And Trump has repeatedly indicated that he sees his own insensitivity to human suffering as a vital source of leverage over Democrats. He explicitly framed his administration’s sabotage of the Affordable Care Act as a strategy for forcing Democrats to cooperate with the law’s repeal and replacement. He has repeatedly suggested that he doesn’t want to make a deal on Dreamers while a court order protecting them from the threat of deportation remains in effect — because he believes he’ll be able to secure larger concessions once that population is thrown into peril. This week, Trump observed that “most of the people not getting paid [as a result of the shutdown] are Democrats.”

If the shutdown extends, and its destructive effects multiply, Democrats will face an ethical quandary: How much concrete suffering should one tolerate for the sake of upholding a righteous principle?

And that is one conundrum that Trump will never have to confront.

+Comments Leave a Comment
Trump’s Leverage in the Shutdown Fight: His Own Nihilism