Dr. Vanessa Tyson, a tenured professor of politics at Scripps College in Claremont, California, has released a statement outlining her account of sexual assault at the hands of Virginia lieutenant governor Justin Fairfax. Tyson’s attorneys released the statement not long after NBC News reported that Fairfax had said “fuck that bitch” during a meeting on Monday evening.

As lieutenant governor, Fairfax is next in line to replace Governor Ralph Northam, who faces nearly universal pressure to resign due to racist photos that appeared on his medical-school yearbook page and his own admission that he wore blackface to a costume contest in 1984. Mark Herring, the state’s attorney general, is now embroiled in his own blackface scandal after he admitted wearing it to a college party. That leaves Fairfax, who has repeatedly denied assaulting Tyson in 2004 and instead insisted that the professor was “very much into a consensual encounter.” Tyson, however, says that she cried as Fairfax forced her to perform oral sex. “I cannot believe, given my obvious state of distress, that Mr. Fairfax thought this forced sexual act was consensual,” she wrote.

Read the full letter below:

THE FEED
6 mins ago
vision 2020
vision 2020
What’s the Latest With Biden’s VP Pick and Announcement?
By Chas Danner
The decision has reportedly been made, and the announcement could come as soon as today.
8 mins ago

Via @DanaBashCNN @jeffzeleny @merica: Rep. Karen Bass was told by Biden himself that she was not the pick, a source familiar tells CNN.
—@DaniellaMicaela
28 mins ago

3:20 p.m.
the law
the law
Trump’s COVID-19 Executive Actions Are Likely Legal, But That’s a Small Relief
By Barbara McQuade
Though fears about the constitutionality of Trump’s executive actions are probably overblown, his latest political stunt still poses a serious threat.
3:10 p.m.
coronavirus stimulus
coronavirus stimulus
The GOP’s Big Lie About Why COVID Stimulus Talks Failed
By Eric Levitz
McConnell accuses Democrats of holding relief hostage to ideological priorities unrelated to the pandemic, but that is precisely what he did.
2:41 p.m.

Joe Biden told top advisers this morning who his VP pick is, per @jeffzeleny.
—@kaitlancollins
2:01 p.m.

Florida reported 5,831 new coronavirus cases on Tuesday and 276 deaths. The number of deaths is a single-day record during the pandemic.
—@PatriciaMazzei
10:26 a.m.
coronavirus vaccine
coronavirus vaccine
Russia Says Coronavirus Vaccine Is Ready, Thorough Clinical Trials Be Damned
By Benjamin Hart
If it’s good enough for Putin’s daughter, maybe it’s good enough for you.
9:26 a.m.
vision 2020
vision 2020
Trump’s 2016 Gettysburg Address Could Be Tough Act to Follow
By Ed Kilgore
A 2020 acceptance speech in Gettysburg would invite comparisons to his 2016 “closing argument,” in which he laid out promises he did not often keep.
9:20 a.m.
games
games
Don’t Just Blame COVID-19 for College Football’s Lost Season
By Will Leitch
President Trump, the NCAA, and many of the sport’s most loyal fans had their chance to improve the odds. They blew it.
9:00 a.m.

Biden’s VP announcement is “imminent” – which isn’t surprising, as the Democratic National Convention starts on Monday

Joseph R. Biden Jr. has told allies that he has interviewed every finalist in his vice-presidential search, and his advisers are planning an announcement for the middle of the week, people briefed on the selection process said on Monday.

In a sign that the choice is now in Mr. Biden’s hands alone, the four-member committee that screened his potential running mates is said to have effectively disbanded — its work is complete, Biden allies said, and there is little left to do except for Mr. Biden to make up his mind.

Mr. Biden’s political team has prepared rollout plans for several of the finalists, and he is expected to announce his decision as soon as Tuesday, though more Democrats expect it to come on Wednesday. The former vice president, however, has not been known for his punctuality so far in the presidential race and the timeline could well slip again.

Biden’s V.P. Pick Is Said to Be Imminent
—New York Times
8:00 a.m.
mcdonald's
mcdonald's
McDonald’s Still Has a Lot to Do to Address Sexual Harassment
By Sarah Jones
Suing the former CEO is only the start for a company that does not require sexual-harassment training at its privately held franchises.
7:45 a.m.

Putin declared victory in the race for a coronavirus vaccine, and said one of his daughters has already taken it. But there are significant doubts about Russia’s claims

Russia on Tuesday became the first country to clear a coronavirus vaccine and declare it ready for use, despite international skepticism. President Vladimir Putin said that one of his daughters has already been inoculated.

Putin emphasized that the vaccine underwent the necessary tests and has proven efficient, offering a lasting immunity from the coronavirus. However, scientists at home and abroad have been sounding the alarm that the rush to start using the vaccine before Phase 3 trials — which normally last for months and involve thousands of people — could backfire.

… Russian authorities have said that medical workers, teachers and other risk groups will be the first to be inoculated. Deputy Prime Minister Tatyana Golikova said that the vaccination of doctors could start as early as this month.

Professor Alexander Gintsburg, head of the Gamaleya Institute that developed the vaccine, said that vaccination will start while the Phase 3 trials continue. He said that initially there will be only enough doses to conduct vaccination in 10-15 of Russia’s 85 regions, according to the Interfax news agency.

Russian officials have said that large-scale production of the vaccine will start in September, and mass vaccination may begin as early as October.

Russia clears virus vaccine despite scientific skepticism
—AP
7:00 a.m.
covid-19
covid-19
The Virus and the Dementia Unit
By Nate Hopper
A nursing home’s battle to treat COVID-19 in its most challenging population.
12:32 a.m.
qanon
qanon
QAnon Groups on Facebook Reportedly Have Millions of Members
By Matt Stieb
The top ten groups have more than 1 million combined members, a sign of the increasing popularity of the far-right conspiracy.
8/10/2020
white house
white house
Trump Says a Person Was Shot by the Secret Service Outside White House Grounds
By Matt Stieb
A COVID-19 briefing was delayed when Trump was escorted from the room and informed that Secret Service shot a person outside the White House fencing.
8/10/2020
weather
weather
Destructive Derecho Tears Through Midwest Toward Chicago
By Matt Stieb
The fast-moving windstorm caused power outages for 430,000 in the region and hit a city reeling from a night of unrest.
8/10/2020
vision 2020
vision 2020
Why Do the Last Votes Counted Skew Democratic?
By Ed Kilgore
The “blue shift” in results that Trump will call fraudulent likely comes from provisional ballots and late Democratic voting by mail.
8/10/2020
coronavirus stimulus
coronavirus stimulus
Trump’s Stimulus Orders Create Legal and Administrative Chaos
By Ed Kilgore
Student-loan-payment suspensions aside, Trump’s orders mostly depend on actions by others that could thwart his scheme, even without litigation.
8/10/2020 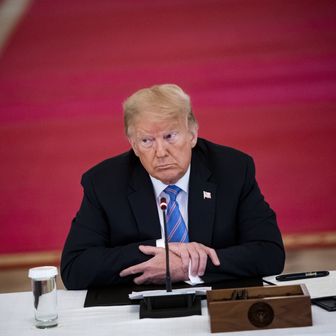 Winter is coming: Why America’s window of opportunity to beat back Covid-19 is closing
—Helen Branswell @ STAT News
8/10/2020
mcdrama
mcdrama
McDonald’s Is Suing Its Former CEO
By Chris Crowley
Steve Easterbrook allegedly lied and destroyed evidence about relationships with employees.
8/10/2020
the top line
the top line
If Uber’s Food-Delivery Business Isn’t Profitable Now, When Can It Be?
By Josh Barro
Huge growth is based on charging customers less for delivery than drivers get paid to provide it.