Bernie Sanders has tried to assure Democrats he does not intend to run a factional splinter campaign in 2020. To that end, he has promised to endorse the nominee, and pledged he will not run a negative campaign, and to date has followed through on the latter promise. But then yesterday, his campaign announced two high-profile hires: speechwriter David Sirota and press secretary Briahna Joy Gray.

Sirota and Gray, both very smart left-wing journalists, share a commitment to exactly the sort of left-wing factionalism that frightens Democrats. Sirota has savaged mainstream Democrats as tools of big-money interests, often in what appear to be intentionally misleading ways. In 2016, Gray dismissed reports that Russia hacked Democratic emails — which fervent Sanders supporters believed distracted from the scandals the emails revealed — and wound up voting for Jill Stein. Like Sirota, she has remained alienated from the party.

The schism reflected in their politics does not really map onto the Democratic Party’s electorate as a whole. The Democratic Party is divided between moderates and liberals. But support for Sanders among voters is not especially ideological. A significant minority of his 2016 vote came from the most conservative voters in the primary (who had supported Hillary Clinton in 2008 for the same reason). Liberal and moderate voters support Sanders and Joe Biden in roughly equal measure: 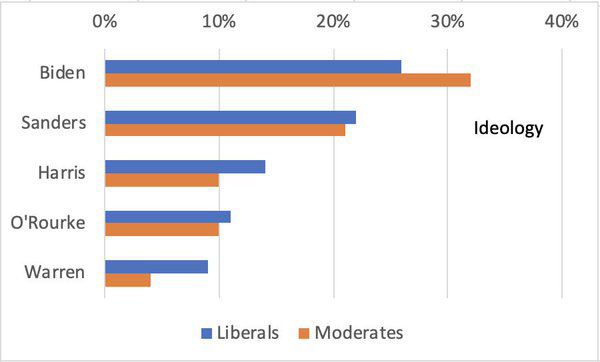 Among the intelligentsia, it is a completely different story. Progressive intellectuals are divided not between moderates and liberals but between liberals and leftists. And leftists themselves are divided between those who fundamentally differentiate the Democratic Party from the Republican Party and those who see the Democratic Party as essentially corrupt, capitalist, and generally unworthy of support.

For the latter faction, Sanders stands completely apart from every other candidate. He comes out of hard-core socialist politics and still uses at least vaguely Marxian concepts (describing most issues as being driven by an economic divide between the people and “the billionaire class”). The split that interests them is not the one between Republicans and Democrats (or conservatives and progressives) but socialists versus capitalists (or “neoliberals”).

A brief tour through the campaign coverage in the socialist magazine Jacobin provides a window into how different the Democratic contest looks to the factional left than to the average Democratic voter. Biden? Extremely bad. O’Rourke? Real bad. Booker? Bad, bad, bad. Harris? Bad. Gillibrand? Bad.

Castro? Surprisingly good! (“By any standards, a towering figure.”) Sorry, wait — that was Fidel Castro. Julián Castro is also bad.

Even Elizabeth Warren rates at best a meh, especially in comparison with you know who. “Warren is a regulator at heart who believes that capitalism works well as long as fair competition exists; Sanders is a class-conscious tribune who sees capitalism as fundamentally unjust. Warren frames her most ambitious reforms as bids to make capitalism ‘accountable,’” explains a recent essay. “Warren seeks a harmonious accord between workers and employers; Sanders encourages workers to fight back.”

The main question surrounding Sanders is whether he can overcome the diabolical machinations of the party Establishment. “If he were to make it through a crowded Democratic Party primary field, successfully dodging attacks from party elites who recognize he’s not their ally, there’s no question that he could win the presidency in 2020.” He is in almost every other respect nearly ideal: “Bernie Sanders is the best candidate — the only candidate who could be considered anything even close to socialist, and the one to beat Trump. A President Sanders isn’t some idealist fantasy, he is our best bet by a mile. He has consistently polled as the most popular politician in America since the primaries.”

From the outside, the fanatical commitment of Bernie’s hard-core support smacks of an irrational cult. But it is a serious worldview that arises out of profound ideological differences with mainstream liberalism. The schismatic Bernie diehards see the Democratic Party as having value only insofar as it is a potential vehicle for Bernie to win the presidency and carry out his political revolution. From their standpoint, viewing the primary contest as a question of which Democrat can beat Trump completely misses the historical stakes.

Sanders doesn’t actually need to court the die-hard socialist vote. There probably aren’t more than a few thousand of them in the entire country — the Democratic Socialists of America have 50,000 members, which is approximately the same as the population of cities like Sheboygan, Wisconsin, or Pocatello, Idaho — and, anyway, they have nowhere else to go. And so whether he wants to fashion himself as a partisan Democrat, or as a schismatic leftist using the Democratic Party, is a choice he can make. For the moment, Sanders’s decision has yet to be revealed.

+Comments Leave a Comment
Will Bernie Sanders Split the Democratic Party in 2020?