During his presidency, Barack Obama faced two mutually exclusive, wrongheaded accusations. Conservatives called him a socialist radical, overturning two centuries of liberty to crush the spirits of job creators and deliver free stuff to his supporters. Leftists called him a neoliberal Establishmentarian bent on placating the rich.

Oddly enough, the conservative attack has largely faded from memory, even though it circulated on the vastly larger scale of the right-wing message machine. (The right tends to memory-hole its socialism scares when the predicted terrors inevitably fail to materialize and a new generation of liberals arises.) It is the left-wing attack that continues to reverberate.

Politico quotes a series of left-wing activists lamenting the failure of the Democratic field to frontally assail the Obama record. “It’s no secret that [Joe Biden] spent his time in the Obama White House furthering policies that redistributed wealth upwards,” says Maria Svart, the national director of the Democratic Socialists of America.

The New York Times Magazine has a profile of Elizabeth Warren which includes an anecdote highlighting her willingness to attack business, where Obama allegedly shied away. In the speech, Warren reminded business owners that they did not create their success on their own because they rely on all sorts of public investments in order to succeed. Her opponent attacked her, and the Times claims, “Obama, running for re-election, distanced himself in an ad shot from the White House (‘Of course Americans build their own businesses,’ he said).”

Both of these memories of Obama’s presidency are false. The charge of upward redistribution of wealth is easy to rebut. Obama raised taxes on the rich while reducing them for the poor, and created a broad social entitlement (health-care subsidies) whose benefits were heavily tilted toward the bottom end of the income spectrum. The sum total of the changes to taxes and spending was very significant — as a share of their income, the poor gained a lot, and the rich lost a lot: 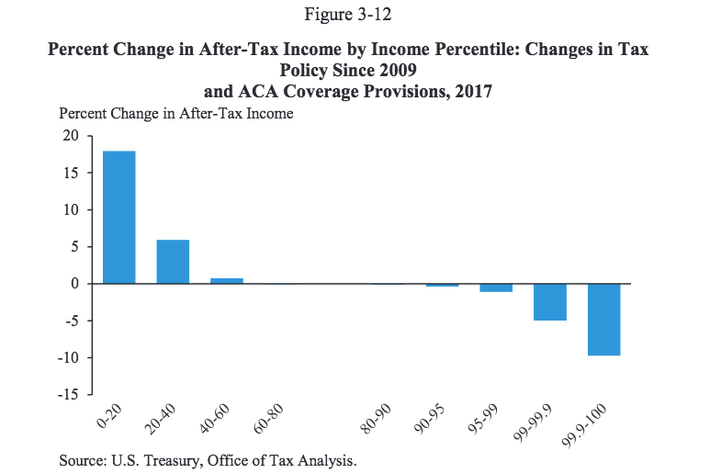 As for the Times anecdote, which presents Obama as undercutting Warren, it gets the fact pattern backward. Far from repudiating Warren, Obama had actually echoed her. Obama’s reelection campaigning had come to include a riff about the mistaken belief of business owners that they alone accounted for their success, and are thus entitled to keep the full proceeds:

If you were successful, somebody along the line gave you some help. There was a great teacher somewhere in your life. Somebody helped to create this unbelievable American system that we have that allowed you to thrive. Somebody invested in roads and bridges. If you’ve got a business — you didn’t build that. Somebody else made that happen. The internet didn’t get invented on its own. Government research created the internet so that all the companies could make money off the internet.

Republicans seized on one awkward snippet — “you didn’t build that,” which was referring to roads and bridges — to misleadingly claim Obama was saying business owners didn’t build their own businesses. Obama’s response, the ad linked in the Times story, was clarifying his own remarks, not repudiating Warren’s. Obama, in fact, based his campaign on the kind of slashing attacks on the “social Darwinist” Republican agenda — which he consciously cast in the populist tradition — that his left-wing critics claim he shunned. And during most of his presidency, the news media was largely flaying Obama for his alleged partisanship and failure to persuade Republicans to compromise.

Of course, there is room for populist complaints against Obama’s record. Obama obviously did not hack down the power and privilege of the business elite as low as the socialists would have liked. For that matter, Obama didn’t even go as far as Obama would have liked — his proposals to raise taxes on the rich and cut them for the poor went beyond what he enacted, and the Republican Congress stalemated.

But wrenching large-scale redistributions of income is never as easy in practice as it might sound in a speech to a roomful of progressive activists. The condemnations of Obama’s record tend to abandon the context of the forces standing in his way and reduce all the shortcomings to corruption or failure of will. If the criticism had a great deal of underlying merit, its advocates would have ways of expressing it that weren’t outright false.