Early in the first Democratic presidential debate, all the candidates were asked who would abolish private health insurance. Only two raised their hands: Bill de Blasio, who is not going to be the party’s nominee, and Elizabeth Warren, who might be. Should that possibility come to pass, her frank answer could prove deeply harmful and perhaps deadly.

As a slogan and general concept, Medicare for All polls well. But public opinion is highly prone to change if altered with new information, and one piece of information that can alienate a large chunk of potential supporters is the concept of replacing all private health insurance: 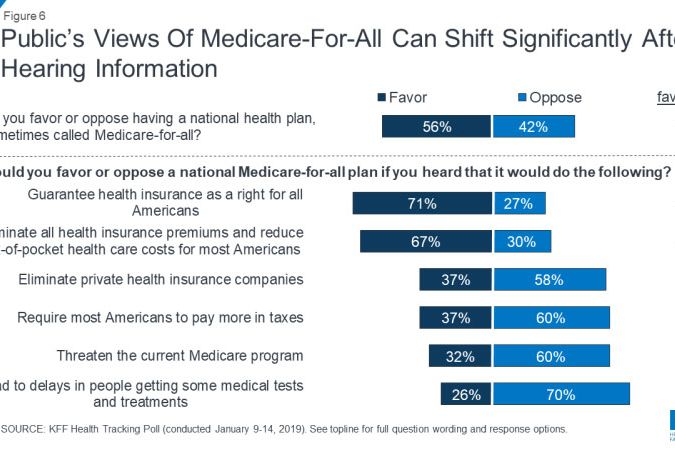 Most liberals would prefer to replace all private health insurance with a government plan, but nobody has come up with a way to get around this barrier in public opinion. That’s why they have settled on incremental plans to create a public option, Medicare buy-in, or other ways to expand single-payer coverage without tearing apart the employer-sponsored system voters are frustratingly loath to part with. Warren might think she can talk the public into it, but the other side gets a chance to talk too, and the history of using the bully pulpit to move public opinion is short and discouraging.

Last year, Warren was emphasizing her plan to reform and regulate private insurance, and touting other Democratic proposals to expand coverage. “There are other approaches as well,” she said in a 2018 speech, listing bills to create a public option, or create buy-ins for Medicare and Medicaid. Warren’s ambiguity seemed designed to let her gesture broadly toward the goal of single-payer without taking on the political liability. In the first debate she closed off that escape route.

Most of the other candidates have acknowledged the political reality of this problem. Even Kamala Harris, who initially said she would eliminate private insurance, has walked back that position. Warren ventured boldly, perhaps foolishly, onto a shaky limb. She may have just filmed the most effective attack ad against herself.