UPDATE: On Wednesday afternoon, The Daily Caller reported that Leif Olson would be reinstated to his position at the Department of Labor. An anonymous official at the department told the outlet that Acting Labor Secretary Patrick Pizzella “personally made this decision after carefully reviewing all the facts and circumstances.”

Bloomberg Law came under fire on Tuesday after publishing a story that appeared to misinterpret a Trump administration official’s Facebook posts as anti-Semitic, which led to the official’s dismissal from his job.

In the story, reporter Ben Penn flagged Facebook posts written by Leif Olson, a Texas conservative who had been appointed as a senior adviser in the Department of Labor’s Wage and Hour Division in August.

In August 2016, Olson wrote a facetious post in which he adopted the voice of an aggrieved, populist Republican. Crucially, the dispatch was published the day after then–House Speaker Paul Ryan easily fended off avowed white nationalist and anti-Semite Paul Nehlen in a closely watched but ultimately uncompetitive Republican primary. 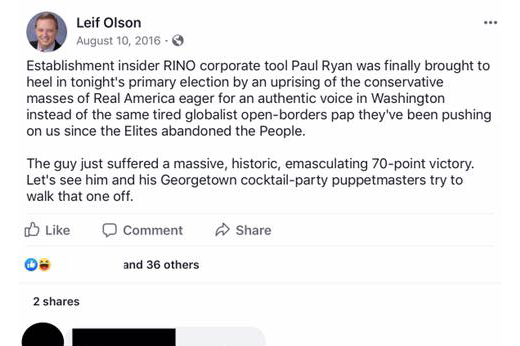 In the voice of his persona, Olson wrote that Ryan had “suffered a massive, historic, emasculating 70-point victory.”

Responding to a commenter who wrote that Ryan was a “neo-con, too” — a frequent epithet aimed at Establishment Republicans — Olson wrote, “No he’s not. Neo-cons are all Upper East Size Zionists who don’t golf on Saturday if you know what I mean.” The commenter responded “That’s what I meant. He’s a Jew. Everyone knows that.” Olson wrote back, “It must be true because I’ve never seen the Lamestream Media report it, and you know they protect their own.”

Though admittedly difficult to parse at first glance, Olson’s remarks were quite clearly meant to mock Nehlen’s prejudiced and conspiratorial views.

Olson underlined his point in a follow-up post, in which he explained that he had been mocking the preemptive triumphalism of a populist movement that had not come close to dethroning its Establishment adversary, and criticizing news outlets — Breitbart specifically — for carrying its water. 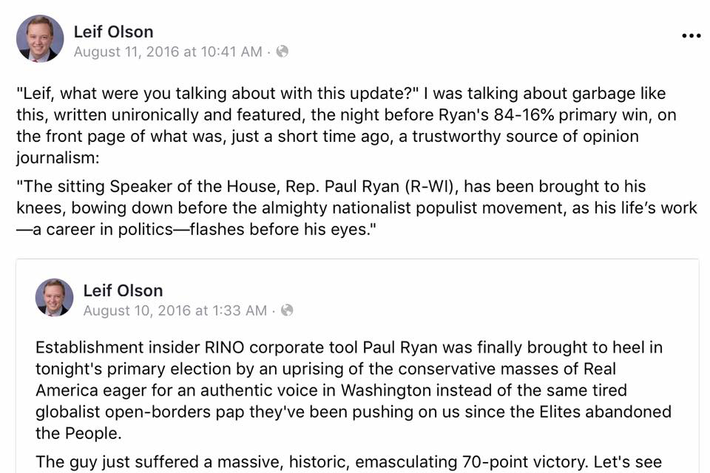 But the Bloomberg Law story did not delve into the particulars of the Ryan election, or how it figured into Olson’s comments.

Olson told the outlet that his Facebook posts amounted to “sarcastic criticism of the alt-right’s conspiracy theories and anti-Semitic positions.” But when the outlet asked the Department of Labor for comment about his social-media activity, the agency said that it had “accepted the resignation of Leif Olson effective immediately.” The exact circumstances of his departure are unclear.

News of Olson’s departure drew a swift backlash from writers and commentators on the left and right throughout the day on Tuesday.

This isn’t a “scoop,” Ben. It’s a deliberate attempt to get a guy fired for mocking the very position you’re accusing him of holding. And you know it.

I know little about Leif Olson and probably strongly disagree with his policy goals, but it seems highly dubious to report his sarcasm as actual antisemitism—again, the context makes it overwhelmingly clear that he was ridiculing antisemites.

The more I think about this ridiculous hit on Leif Olson, the more I'm disturbed by the quick resignation. If that obviously sarcastic post is all there was, then ride it out. Defend your people.

The conservative Washington Examiner called the story “one of the most shameful, egregious media failures of the year,” while the liberal Vox labeled the accusations against Olson “unfair and misleading.”

Penn did not offer a clear defense of his story, other than to point out that the Facebook posts in question were public. He also posted private Twitter messages in which conservative commentator John Podhoretz attacked him for his reporting in personal terms.

To Leif Olson's friends & others who take issue with this reporting,
I sent a screenshot of a public FB post to DOL, seeking comment. 4 hours later I received this response: “Today, the Department of Labor accepted the resignation of Leif Olson effective immediately.” https://t.co/PZbIScDHqe

My fellow journalist ⁦@jpodhoretz⁩ is DMing me that I’m a “miserable prick” and a “repugnant child.” All over this piece: https://t.co/68kDvaFn0h pic.twitter.com/VJGLaD9vTZ

But there were signs that the story was not withstanding scrutiny. The Anti-Defamation League, which initially condemned Olson’s Facebook posts, changed its tack on Tuesday afternoon.

The Bloomberg Law story on Leif Olson appears to be crumbling around it. Jake Hyman of the ADL is quoted in the story calling Olson's FB post "clearly anti-Semitic." An ADL spox sends this statement: pic.twitter.com/03o5oFgCRp

Leif Olson declined to comment. But in a Facebook post on Tuesday, Olson wrote: “Greetings, Bloomberg readers. I never thought I’d see the day when making fun of alt-right anti-Semites led to being branded an anti-Semite, but here we are.” In the post, he also took issue with the Bloomberg story’s portrayal of his role in various legal cases, including one involving same-sex marriage.

The Trump administration has hired no shortage of people with a history of making bigoted remarks — some of whom have withdrawn or been removed when those indiscretions came to light. But Olson’s case brings to mind Shirley Sherrod, a President Obama appointee who was fired in 2010 as Georgia State Director of Rural Development after Breitbart touted a misleadingly edited clip that showed her appearing to make racist remarks. Her firing led to an apology from Secretary of Agriculture Tom Vilsack, as well as an offer of a new position — which Sherrod declined.

With the indignation over his removal unlikely to subside, Olson may live to get a second chance as well.