Gordon Sondland, the European Union ambassador, was a lynchpin of President Trump’s defense in the Ukraine scandal. Sondland had been a loyal functionary throughout, carrying out the president’s directives dutifully if reluctantly. Republicans publicly telegraphed their plan to pin the whole scheme on Sondland and portray him as having acted alone. Sondland’s initially foggy testimony seemed to indicate his pliability in the cover-up.

But his public testimony Wednesday has destroyed that plan. Sondland has confirmed what is obvious to everybody: The entire scheme was directed by Trump all along. “We followed the president’s orders,” he said. “Everyone was in the loop. It was no secret.”

Trump’s operation has been painfully clear since May, when Rudy Giuliani boasted about his plans to the New York Times, telling the world that he was acting on the president’s orders, and conceding that his actions were possibly “improper” though not, in his view, illegal. The investigation has largely consisted of connecting Trump and his henchmen to these boasts. Sondland testified today that, while he did not want to, he — along with Rick Perry and Kurt Volker — “worked with Mr. Rudy Giuliani on Ukraine matters at the express direction of the president of the United States.”

Sondland undercut the Republican defense that Trump somehow cared about corruption, testifying that Trump didn’t even care about Ukraine conducting the investigations he demanded. Trump merely demanded the announcement of the investigations, which he could tout as evidence of the apparent criminality of Joe Biden and the FBI. Sondland also destroyed the defense that Ukrainians were unaware that military aid had been held up, testifying, “Before the September 1 Warsaw meeting, the Ukrainians had become aware that the security funds had yet to be disbursed.”

And he provided emails showing his own communication with Andriy Yermak, a Ukrainian official, establishing a clear quid pro quo. Yermak assured Sondland in writing that Ukraine would announce the investigations in return for the announcement of a White House meeting between Trump and Ukrainian President Zelensky. 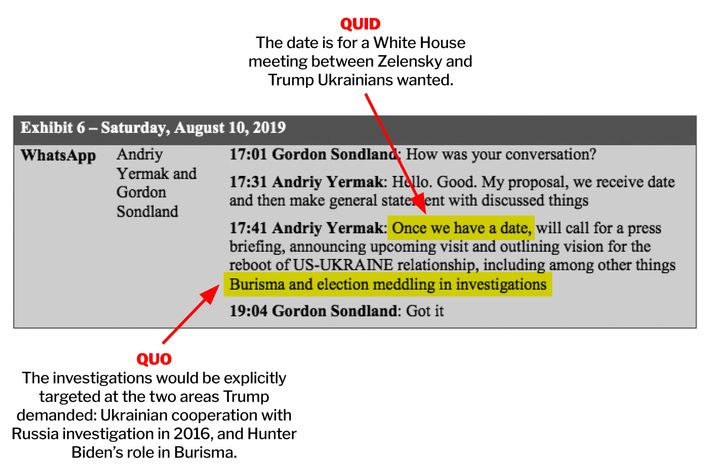 It is proof of a clear trade of official acts: a White House meeting in return for a political favor.

The shock of these developments was registered on Devin Nunes’s face. The White House had attempted to procure an advance copy of Sondland’s testimony, to no avail. Yesterday, Republicans were still trying to insist there was no evidence of a quid pro quo, and that nothing had tied Trump himself to the plot. Sondland “testified previously that he had spoken to POTUS and POTUS had said no quid pro quo. We’re expecting of course that his testimony will be consistent …” announced Representative Mike Turner shortly before today’s hearings. “Unless they tie this to POTUS then they’ve fallen short.” Turner set the bar at a level Democrats cleared by 9 a.m.

Nunes himself was so surprised he failed to alter his prepared testimony, which, after his usually pastiche of fantastical claims about the Russia investigation, prepared to treat Sondland as a friendly witness. “You are here today to be smeared,” he said, even after Sondland had distributed testimony implicating Trump.

If Republicans want to engage with the facts of the case at all, their sole remaining defense is Sondland’s claim that Trump failed to personally tell him that military aid was held up to force the investigations. Sondland has proved one quid pro quo (the meeting) while failing to prove the other (the aid).

Of course, it is beyond obvious that Trump directed both. As Sondland noted, Trump directed everything, often through Giuliani. Trump himself has repeatedly stated in public that he held up aid to Ukraine to compel investigations of the Bidens. This has all been memory-holed on the weird assumption that Trump’s public confessions somehow don’t count. But before Trump realized he had to deny it, it wasn’t even a secret. “We’re supporting a country. We want to make sure that country is honest … it’s very important to talk about corruption. If you don’t talk about corruption, why would you give money to a country that you think is corrupt?” he said to reporters. “What exactly did you hope the Ukrainian president would do about the Bidens?” one reporter asked. “I would think that if they were honest about it, they’d start a major investigation … they should investigate the Bidens,” Trump answered.

If Republicans want more evidence that other Trump staffers were told to hold up the aid in return for the investigations, they could demand they testify. Instead, those officials are refusing to testify, and Republicans are hiding behind their refusals to claim there is some shred of ambiguity as to Trump’s involvement.

Trump tried to protect himself by refusing to allow notetakers in his presence and funnel his corrupt orders through a handful of loyalists. Trump thought Sondland was a loyalist. But Sondland has been exposed by an aide who is testifying that he heard Sondland talk to Trump about investigating the Bidens. And now he has told the world what’s been perfectly obvious — that Trump’s crooked scheme was directed from the beginning by Trump himself.

THE FEED
19 mins ago
texas school shooting
texas school shooting
For Trump and Other NRA Speakers, the Answer to Uvalde Was More Guns
By Ben Jacobs
The horror of Tuesday’s school shooting in Texas left an impression at the NRA’s annual conference, but it didn’t make a difference.
5/27/2022
student loans
student loans
Biden Searches For the Political Sweet Spot on Student Loan Debt Relief
By Ed Kilgore
His long-overdue promises to provide loan forgiveness are colliding with fiscal realities and differences of opinion between generations.
5/27/2022
what we know
what we know
Texas Officials Acknowledge Botched Police Response to School Shooting
By Intelligencer Staff
The local police chief in charge delayed confronting the gunman — while kids trapped inside the classroom repeatedly called 911 asking for help.