One of the more confusing questions pollsters have asked Democratic voters to answer this year is whether they would prefer their candidate “return to Obama’s policies” versus pursuing a more liberal (or conservative) course. A modest plurality picked the Obama option. You couldn’t find a bigger believer in Obama’s legacy than me — I literally wrote a book touting it — and I’m not even sure how I’d answer that question. “Obama policies” could mean any one of the following:

The ambiguity about this question reflects the larger confusion about Biden and the return to normalcy he promises. Biden’s rhetorical emphasis seems to imply his plan is no more than the first definition of Obama-ism, winding the clock back to the moment before Donald Trump took the oath of office. But the truth is that Biden has a domestic agenda that, while nowhere near as radical as the Bernie Sanders platform, is almost certainly to the left of anything even a Democratic-run Congress would pass.

Last summer, Biden assured a group of donors that “nothing fundamental will change” in their lives under his plan. Outraged progressives seized on the words, often skipping right over the “fundamental,” reimagining the line as a promise that nothing would change for the rich:

Here's Joe Biden, literally telling the mega-rich that if he's elected, nothing will change. pic.twitter.com/I1CecQBWq9

Biden was not saying that. His point was that he was asking them to take a hit to their after-tax income in return for buying social peace, but that the sacrifice would be finite — he would not confiscate their homes or end their livelihoods. Indeed, last week the Tax Policy Center published its analysis of Biden’s plan to increase taxes on the rich. The plan would raise $4 trillion over a decade, making it — if enacted — one of the largest wealth transfers in American history.

TPC’s has a chart illustrating the effect on after-tax income. One-percenters would see their annual income drop by 10-15 percent: 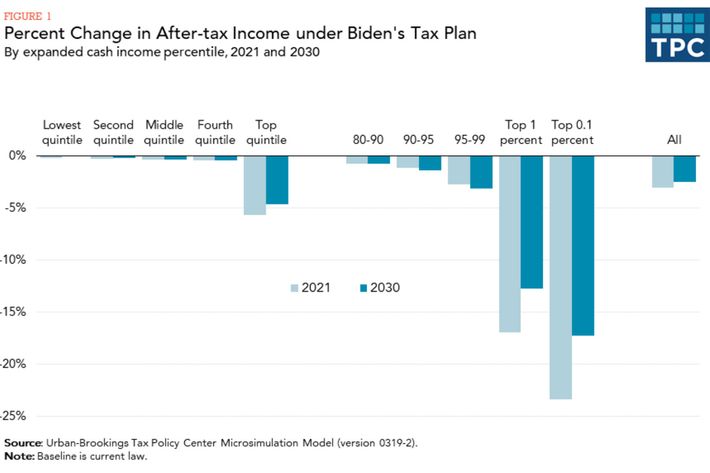 Now, as Biden promised, that still wouldn’t be a “fundamental” change in their lives. They would still have a lot of money — more, in most cases, than they enjoyed a decade ago. But it is still a very sizable change, one that would likely meet with bitter and even hysterical resistance from the rich when introduced in Congress.

There is plenty more liberal meat on the bones of Biden’s program. He is proposing more generous subsidies and medicaid funding along with a public option in order to achieve universal health care; a combination of $1.7 trillion in clean energy investment and a suite of tighter regulation to bring emissions to zero by 2050; a combined $2 trillion in new spending on early education, post-secondary education, and housing, a $1.3 trillion infrastructure plan, and a $15 minimum wage.

There is more Biden could be proposing to advance the liberal agenda. I’ve argued he should adopt some of Elizabeth Warren’s anti-corruption and financial regulation plans, including a financial transaction tax. Eric Levitz has some ideas of his own, including marijuana legalization. If he can carry a Democratic majority into the Senate, a lot of possibilities will open. Campaign proposals only go so far, though. The limits of his legislation will be set by the 50th Senator, and the limits of his executive action will be set by the fifth Supreme Court justice. That would have been true under a Sanders or Warren administration, too.

Obama effected a great deal of progress, especially in the first two years, before Republicans took back Congress and blockaded major legislation. The slow-paced last six years of Obama’s presidency helped spur the Bernie movement, with its ambition of summoning a mass army of non-voters that would force the likes of Mitch McConnell to open the way to left-wing reforms.

The failure of the Sanders campaign to inspire anything like such a voter uprising, and the all but certain end his campaign is facing, should bring the left back to reality. But reality doesn’t mean nothing. It means that, with the possibility of full control of government comes the opportunity for meaningful progress again. Biden mostly casts himself as a return to normalcy. But what he is promising as well is a continuation of the liberal tradition of Roosevelt, Johnson, and Obama.