The Nürburgring — that notorious 20-mile stretch of asphalt in western Germany — is widely considered one of the most harrowing tracks on earth. It was the ‘ring that nearly took the life of Nikki Lauda in 1976, when his Ferrari Grand Prix racer lost control and exploded into a fiery cautionary tale. Sixty-nine other racers, and countless more amateurs, haven’t been so lucky. Its northern loop, or Nordschleife, built in 1927, hugs a medieval village and castle, racking up 1,000 feet of elevation change in the process. Legendary British racer Jackie Stewart called it the “Green Hell.” For these reasons and many more, the time it takes a vehicle to circumscribe the treacherous ribbon of tarmac has become a standard by which a vehicle is judged. Of course, it’s not just drivers staring down the clock — manufacturers, potential customers, and gearheads the world over all compare track times the way CNN pundits parse poll numbers.

This past September, Alfa Romeo brought their intensely anticipated Giulia to the track to see how it fared in the ultimate test. With driver Fabio Francia behind the wheel, the Giulia — amped up in high-performance Quadrifoglio trim — looped the Nordschleife in seven minutes and thirty-two seconds: the fastest time any sedan has ever scored. That’s a $70,000 car lapping the hallowed tarmac faster than every German, Japanese, American, and British four-door with triple the price tag.

But that only begins to explain why the Giulia is such a mouthwatering prospect for American consumers. The storied Italian brand has been missing from these shores since 1995, and other than a couple ultra-rare coupes, the Giulia is the first potential volume seller in America in over two decades. So for dedicated Alfisti who’ve been denied access to their joy for so long, getting behind the wheel of an Alfa Romeo that blew the doors off the likes of Porsche and BMW is nothing less than providence.

Because make no mistake, the lap time of the Nürburgring is arguably the single most accurate metric for absolute performance. The 0–60 mph clip is certainly a ubiquitous stat, but not only is it arbitrary (why 60? Why not 40? Or 100 mph?), it really only measures one property of a car: straight-line acceleration. And top speed only describes exactly that. What use is a car that crashes and burns at the slightest steering input, or stops with the elegance of a novice skater, if it happens to have a slightly higher top speed?

Which is not to say the Giulia Quadrifoglio blushes at academic tests. It bursts from 0–60 mph in 3.8 seconds. With only 7 pounds for every horsepower, it also has the best power-to-weight ratio in its class. And its 191 mph top speed is evidence of enough blistering velocity that you’re probably looking at jail time in third gear, should you ever care to find out.

But the fact that it can put these rarefied figures together to achieve one singular performance metric is a testament to the Giulia’s all-around integrity. Because that’s what the Nürburgring does: test a vehicle to its very core, stressing every variable to the highest degree, in every sense possible. And for its superlative execution, the Giulia can thank the brain trust at Ferrari. 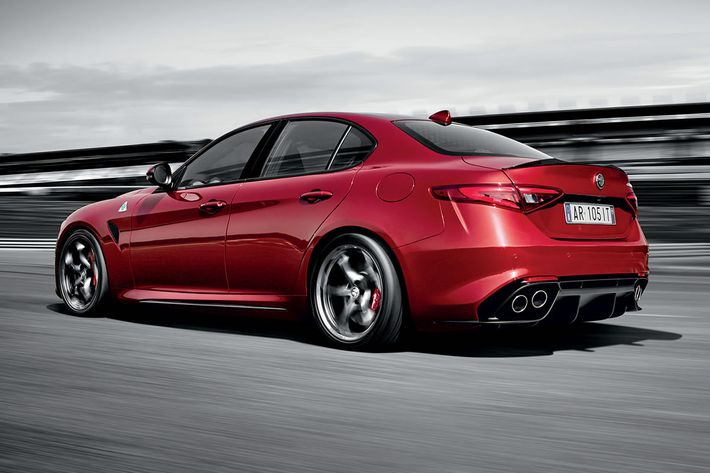 Let’s start with the heart of the Quadrifoglio: a 2.9-liter twin-turbocharged V6, generating 510 horsepower and 443 lb-ft of tire-melting torque. It’s essentially the same motor as that found in Ferrari’s holy 488 GTB supercar, only with a pair of cylinders lopped off the V8. And the chassis — the internal structure that defines a car’s architecture — was tuned by a man named Philippe Krief, the chief engineer of the 458 Speciale, one of the greatest performance vehicles of this century.

But those are all just stats, numbers on a page, until you slip into the leather sport seats, press the crimson Start button on the steering wheel, and unleash the Giulia onto the asphalt yourself. There, you will experience a vehicle that has been considered from the ground up, from its near-perfect 50/50 weight distribution to its carbon fiber-embellished body (the hood, roof, crankshaft, seats shells, diffuser, and rear spoiler are all constructed of the space-age material). When you hit high speeds, its front lip will even drop an inch to allow more air into its ducts, adding 200 pounds of downforce for greater stability. This is the only sedan in the world with active aerodynamics.

On the open road the Giulia Quadrifoglio expresses a sort of balance and orchestration of parts usually reserved for grand musical movements. Tug the paddle-shifter, tap the throttle, and sense the explosion of V6 fury ahead; feel the vibrations from the fat quad tailpipes screaming into the surrounding air. You don’t need to go all the way to the Green Hell to figure it out — the ride home from the showroom should suffice. 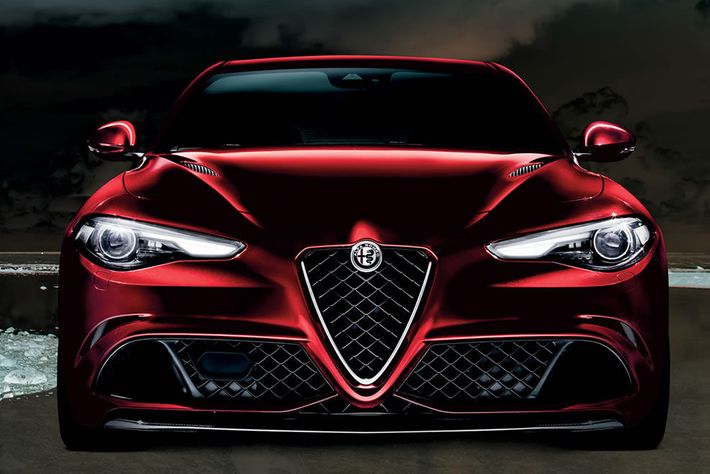 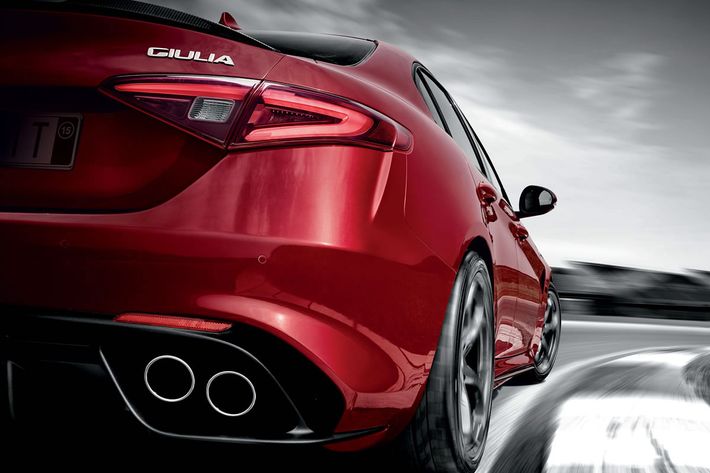 Behind the Wheel of the New Alfa Romeo Giulia Quadrifoglio

Dec. 23, 2016
Why We Love Speed The U.S. now churns out 211 tons of amphetamines every year. We’re hooked on the stuff, and the reason lies deep in our evolutionary roots.
Dec. 23, 2016
10 Apps to Help Speed Up Your Life Save yourself some time and download them.
Dec. 23, 2016
How Much Faster Could the Fastest Human on the Planet Be? Of the six fastest 100-meter runners in history, Usain Bolt is the only one who has never tested positive for the use of a banned substance.
Dec. 23, 2016
How to Make Friends Faster Five scientifically proven ways to build meaningful relationships quickly.
Dec. 22, 2016
Watch a Traffic Jedi Hit 240 Consecutive Green Lights in Manhattan Okay, 239 green lights and one yellow — but still!
Dec. 22, 2016
Who Really Has the Fastest Hands in Boxing? Everyone says the quickest-puncher title belongs to featherweight Gary Russell Jr., but there’s never been a way to accurately measure it — until now.
Dec. 22, 2016
SNL’s Two-Minute Set Transformation From Cold Open to Monologue Is Mesmerizing New behind-the-scenes footage shows an army of crew members dismantling Trump’s living room with seconds to spare.
Dec. 22, 2016
Supersonic Underwater Travel May Be Coming Soon Thanks to the property of supercavitation, scientists say submarines will eventually be able to rocket through the ocean inside a gaseous bubble.
Dec. 21, 2016
Celebrity Speed Round: What Would You Bring to a Desert Island? From Christian Slater to Michael Fassbender, we asked 14 stars the same question. The catch? They only had 10 seconds to answer.
Dec. 21, 2016
Super Mario Run Owes Its Record Success to the ‘Speedrunner’ Community How an obsessive group of gamers inspired Nintendo’s new iOS hit.
Dec. 21, 2016
Which Countries Have the Fastest Average Internet Speeds? America hasn’t cracked the top ten yet, but we’re getting closer.
Dec. 20, 2016
The Man With the Golden Tongue World-champion auctioneer T.J. Freije on the art of the rapid-fire sell.
Dec. 20, 2016
We Test-drove a Microwave Meal-Delivery Service It’s a whole new take on fast food: healthy, flash-frozen meals that take three minutes to “cook” at home. Is this the future of eating?
Dec. 19, 2016
We Talked to a Guy Who Breaks Things With His Head Toilet seats, actually. Forty-six of them in one minute. Yes, that’s the world record.
Dec. 19, 2016
What Is the Speed of Thought? It takes half a second for sensory information to be incorporated into conscious experience. So, in a sense, the future has already happened.
Dec. 19, 2016
Speed Painting Is the Next Hot Pageant Talent Forget baton twirling, these beauty contestants can paint the Mona Lisa in 90 seconds.
Dec. 19, 2016
Would You Drop $12,000 to Learn to Drive a Lamborghini? That’s the price tag for the carmaker’s two-day driving academy at the Las Vegas Motor Speedway.
Dec. 16, 2016
The 9 Quickest Cars in the World Glorious feats of engineering from the Koenigsegg Regera to the Ferrari LaFerrari, where design meets face-melting function.
Dec. 16, 2016
Here’s How to Learn a New Language Faster Without Paying Attention Two recent studies suggest that trying less can actually speed up the process.
Dec. 16, 2016
When Jimmy Fallon and Sienna Miller Speed Eat Noodles, Everybody Wins The Ramen Challenge got messy.