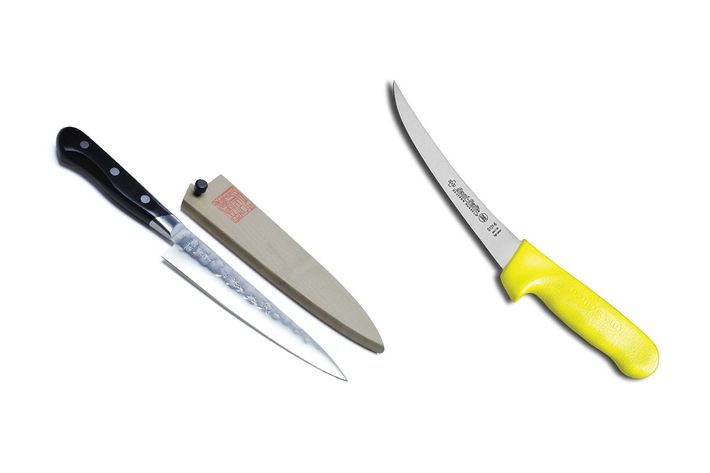 “In building a core knife arsenal, the value of a petty knife is often overlooked. They’re kind of the awkward teenager of blades, not as small as those baby paring knives and not as large as a grown-up chef’s knife. These knives really excel when working with small vegetables, but I’ll break them out when filleting sardines or deboning chicken legs. There are a bunch of good Japanese brands that make great blades, but not all make them in the five- to six-inch range. I want a relatively straight blade, but that has the ability to rock back and forth a bit for dicing and mincing veggies like shallots and garlic. Yoshimuni makes a good blade that fulfills these petty knife wishes.” - Matt Griffin, Bar Sardine and Fedora

“My mom bought it for me for Christmas in 1986, the first year I was in pastry school, working as a cook. I learned to bone out lamb legs and veal legs with it; the way I know how to butcher relates specifically to this knife. There’s now a little indent where my thumb fits perfectly.” - Patti Jackson, Delaware and Hudson

“I bought this knife from JB Prince after I saw my chef de cuisine Kevin Pemoulie using the same manufacturer’s chef knife. It’s been just about eight years since I’ve had this knife in my bag, and it’s been a good friend to me. The handle is wood and shows the years of use, and it just feels right in my hand. The edge is 80/20, which means most of the cutting edge is on the front side of the knife, allowing for a thinner edge to make more precise and accurate cuts. I’ve used it to cut vegetables, butcher fish and chicken, slice sashimi, and pretty much anything else. As long as you take care of it, it will always take care of you.” - Paras Shah, executive chef at Kat & Theo 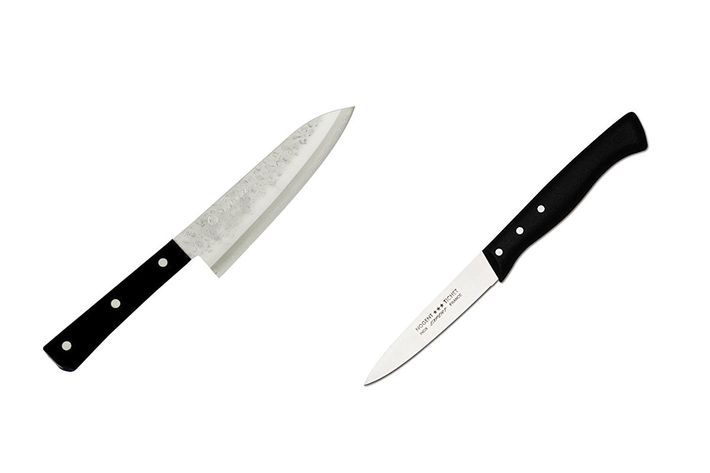 “I started using Takamura knives about two years ago and I will never switch to another chef knife again. They’re super sharp. That said, I love using cheap paring and tourné knives from JB Prince, too. Then, when someone steals it, who cares? It costs just a few dollars. ” - Andrew Whitcomb, Colonie

Buy it:
Takamura Chef’s Knife; from $160 at MTC Kitchen
JB Prince Paring Knives; from $13 at Amazon

“A knife is the most personal tool a chef has. When we find one like this one, that we work and feel best with, we tend to cherish them for a long time. The best knife-work can only be executed with a knife that feels the best. I use this one for tasks as diverse as: cutting chives, slicing fruit, portioning out meat pieces and fish filets to cutting a terrine.” - Gabriel Kreuther, Gabriel Kreuther

“The weight is just perfect, and the wood handle with metal bolster makes the knife so easy to use. I like to cut fish with this knife as it is very easy to cut through bones and flesh. For example, I have a black cod on our menu and it’s so easy to fillet as the knife blade is sharp all the time and easy to handle.” - Julian Medina, Toloache Restaurant Group

“For Japanese cuisine, the length of time a chef holds and works with a knife is relatively longer than for other cuisines. That makes the balance and feel even more important. Also, knives are traditionally considered sacred in Japanese culture, and, in that regard, a personal knife helps a chef work toward his/her dishes faithfully and sincerely.” - Masaharu Morimoto, Morimoto