New York Magazine is celebrating its 50th anniversary with this enormous volume published by Simon & Schuster. Highbrow, Lowbrow, Brilliant, Despicable: Fifty Years of New York aims to tell the story of the capital of the world, as seen in the pages of the magazine that shares its name. Over those five decades, the city went from broke to rich, from busted-down to gleaming, through three blackouts, two terror attacks, and one real-estate boom that never seems to end. This huge, joyous, visually kaleidoscopic tour through history is now on sale, and if we may be so bold, we think you’ll enjoy it very much. Oh, and its cover unfolds into a poster-size, five-decade, 400-item Approval Matrix for the ages:

To celebrate @nymag's 50th anniversary, it's releasing a book! 🍾🥂🍎 Since founding in 1968, @nymag has told the story of the city's constant morphing, week after week. In the pages of the book, you'll see Andy Warhol's polaroids, Gloria Steinem's writing, and @lindsaylohan's famous Marilyn-inspired shoot. Bonus: the jacket is an Approval Matrix of the last 50 years. Tap the link in bio to pre-order. #nymag50 @simonandschuster

Below is a quick peek. (But at $40 on Amazon for 432 pages, plus eight double foldout spreads, we think — and others agree — it might be worth just buying it for yourselves, or giving it as a gift to any magazine nerd or city lover you know.) 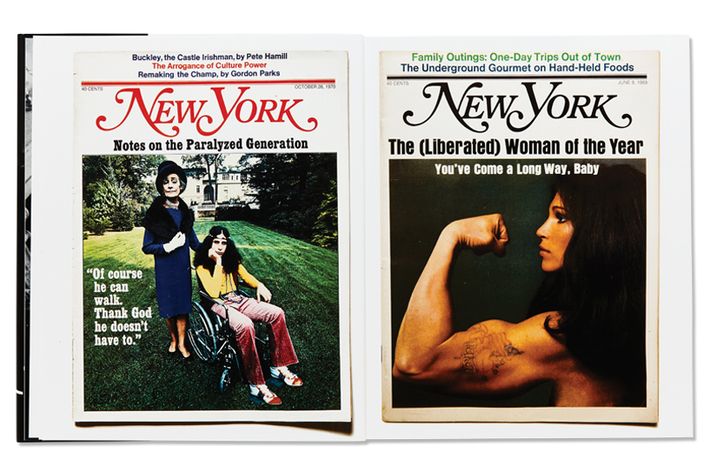 1969–1970: The magazine covered social dynamics with verbal and visual wit. Milton Glaser, New York’s co-founder and first design director, recently remarked that the punch line on the “Notes on the Paralyzed Generation” cover came from a joke he’d been telling since he was a kid. As for the liberated-woman bodybuilder, this picture was made before Photoshop: Glaser remembers that the two models (one for the face, another for the arm) stood close in the studio, and that the woman flopped her hair over his shoulder to hide the joinery.
______________________ 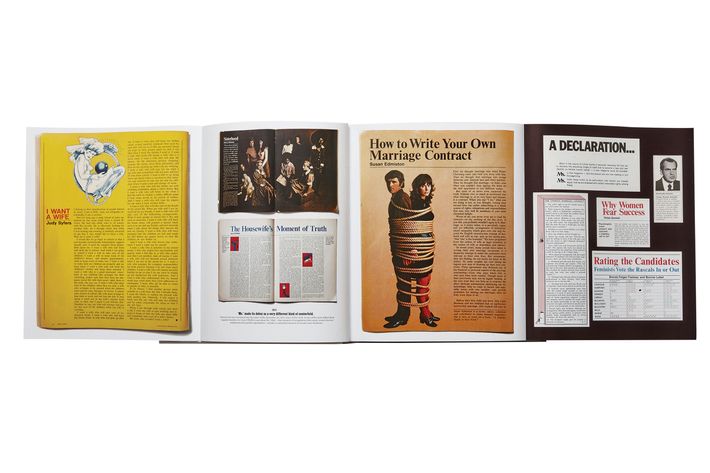 1971: Ms. was born in our pages. In 1971, Gloria Steinem—one of New York’s two original political columnists, the other being Jimmy Breslin—was looking to start a magazine covering the women’s movement. Clay Felker, New York’s founding editor, agreed to run a 30-page sampler of the new magazine’s stories bound into the year-end issue of New York. The package (which sold out on newsstands) included the stories reprinted on this gatefold spread, including “I Want a Wife,” by Judy Syfers, a classic that’s still taught in women’s-studies classes.
________________________ 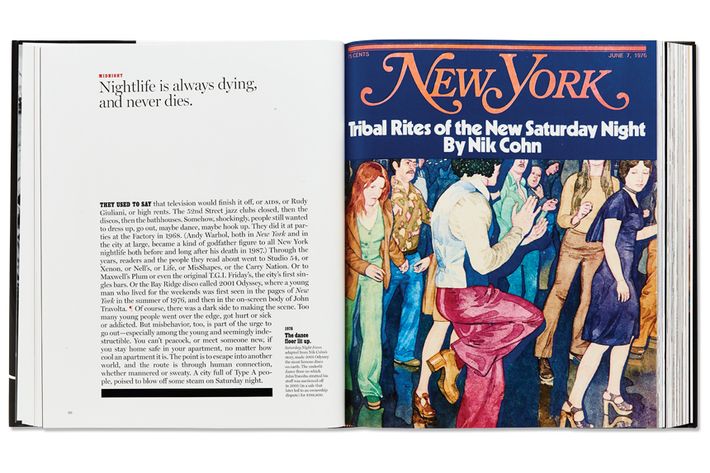 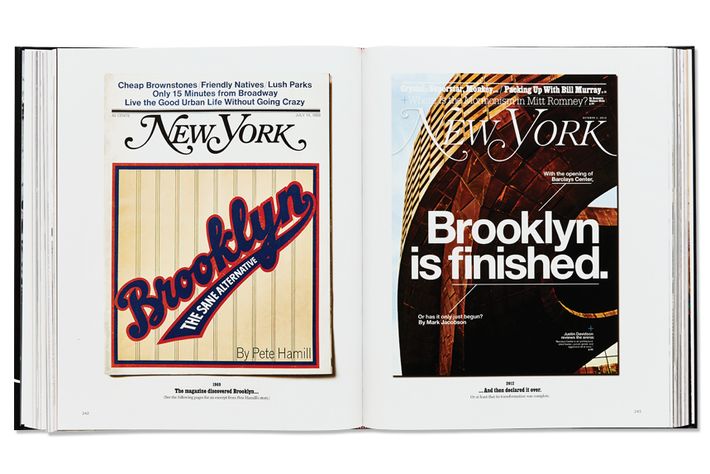 1969 and 2012: The magazine discovered Brooklyn … and then declared it over. In that first cover story, Pete Hamill wrote with astonishment that the neighborhood in which he’d grown up, a working-class dump known as Park Slope, was being repopulated by youngish, Manhattanish families. He happily reported that the best brownstones could be had for considerably less than they cost in Manhattan: about $30,000.
________________________ 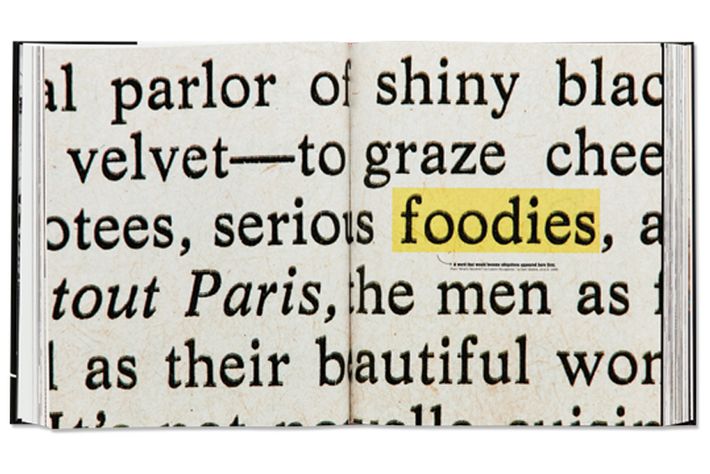 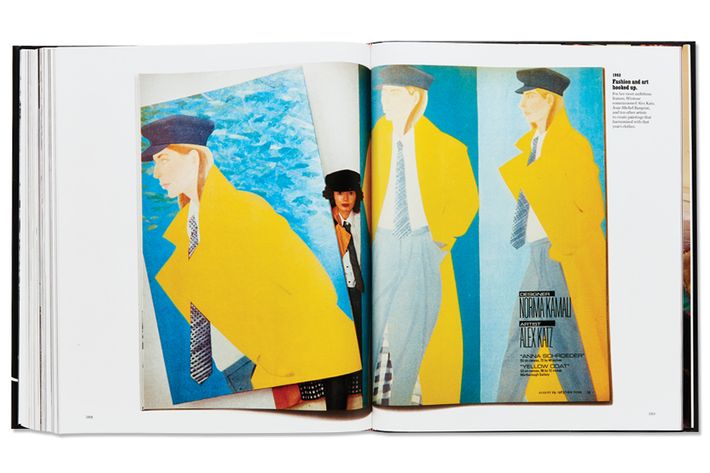 1982: Fashion and art hooked up. Anna Wintour — New York’s fashion editor in the early 1980s, before she went to Vogue and international fame — says that this was her favorite story for us, a feature in which painters were commissioned to produce art that harmonized with the clothes on view. This “backdrop” is by Alex Katz, who last month drew New York’s three 50th-anniversary covers.
_________________________ 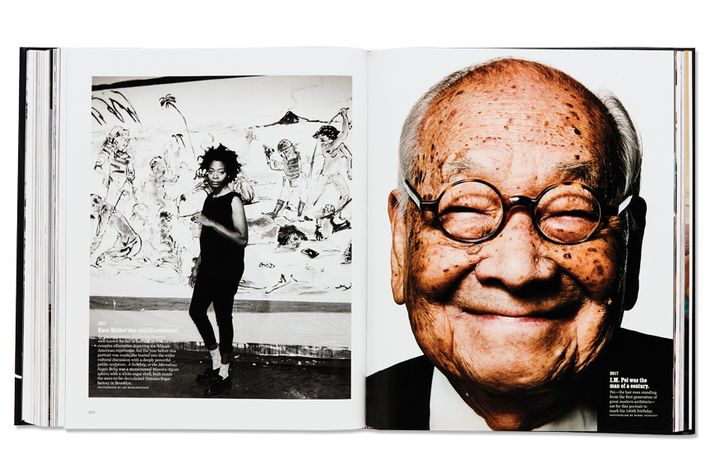 2016–2017: We covered artists old and young. Kara Walker appeared in the magazine shortly after making her majestically powerful Sugar Sphinx sculpture on the Brooklyn waterfront. In that same issue, we celebrated I. M. Pei, the last of the great modernist architects, to mark his 100th birthday.

We Published a Book!