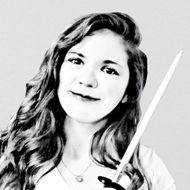 I work at IKEA. I’m in IFS – IKEA food service. You don’t really think about the store as a place people go for food. Everybody mostly thinks furniture. But for some people, this is their destination for food.

Our biggest main ticket item is meatballs. We also have veggie balls. And we serve Swedish pancakes, waffles, eggs in the morning. And there are people who come in only for the salmon. We go through a ton of salmon. Probably because, I believe, our salmon plate is $6.99, and there are not very many places where you can go and get a plate of salmon for $6.99.

I don’t know where they make any of the food. I know it is in the U.S. I’ve heard a few rumors it could be in Maryland from our corporate office. Or I’ve heard that it could come from California. I don’t know exactly. Everything basically is frozen and in a bag. We don’t make anything from scratch at all. It comes on trucks. But I feel like the quality is good. I don’t think it’s necessarily bad or terrible for you. It’s definitely not something I’d recommend eating every single day, but I don’t feel ashamed in serving any of our food. And I think people enjoy our food for the most part.

My specific job is a cold prep server. I’m usually the first person serving, which means I am the one who asks you what you would like and starts your plate. But I do a lot of different things, too. Sometimes I could be prepping all of the items. Or making all the plates of cold food. Or I could be cooking on the ovens, which is actually putting the meatballs in the ovens and bringing them out to the line. Or I could be what we call “quarterback,” which is pretty much working with all the mashed potatoes or macaroni — all of the bagged items. There are a lot of positions. And there is not one coveted position. Not exactly. But, like, everyone hates to serve. I wouldn’t say it’s very hard, it’s just stressful. I mean, if it’s a Saturday or Sunday, it’s probably for the best if you mentally prepare yourself because it is going to be a zoo. People are going to get irritated.

IKEA is not a small store. It’s not a quick in-and-out get-what-you-need-and-go. It’s two stories tall and I believe the entire walk to go through showrooms is about two miles. It takes about two hours to get through if you’re pushing along and not stopping. So by the time people get ready to eat and stand in the big long line for food, they get very irritated that everything isn’t ready for them right then and there. It gets like mind-boggling crazy.

Customers can snap on you. One Saturday, we completely ran out of pancakes and there was only about 15 minutes until breakfast was over, but there was of course a very, very long line and the people that were the first people after we ran out of pancakes, they were very livid and they took it out on me. They yelled at me and one man said, like: “You’re IKEA! How can you be out of pancakes?” And I thought, you just have to apologize and try your best to calm them down before they leave. You know, you offer them what you have. “We have waffles, cinnamon rolls” — exhaust every option you have to try to get them less angry. But sometimes it doesn’t work and that one customer was really mad.

You can’t take it out on them. You just have to soak it and just let it go, basically. At first, when you’re fresh out in the industry, you let things get to you, but at the end of the day you have to learn to let them be mad and to defuse the situation as much as you can because if you get mad it makes things a lot worse. So I don’t match their anger. I stay calm no matter how mad they can get. I just apologize and let them know that, yes, I do understand, we should definitely have pancakes. And that’s the best I can do.

Still, it can be very stressful. I’ve had people slam their plates on top of the line. They definitely lash out. One lady shoved her cart into the wall and stormed out.

And I understand. They’re sucked into a rectangular building walking in basically a circle all day. It’s hard. And the line, just for the food, I would say if you started from the back and got to the front, I would say it would take probably around 30 minutes depending on who was serving and how fast they’re pumping out the food. So by the time they get to me, people are tired. No doubt. I let it get to me probably more than it should, but at the end of the day I have to tell myself that you know, the only thing they want is their food and I understand that.

And you know, I enjoy it. IKEA is a good company, they treat their employees very well. Give them good benefits. They offer health insurance, eye care, dental, all of the normal benefits you think of. And for the area, it’s good pay. I’ve worked a lot of other food jobs, service jobs. I’ve worked at hotels, restaurants. But the pay is better here. Because, where I’m living I believe the minimum wage is $9.47. The first job I got when I moved up here, it was, I believe, like $9.50. And the second job I got was IKEA and that was almost a $5 raise.

I’ve made a couple of good friends here. There are good people here. I would say it’s a family. More family than corporate. Like there’s this lady named Sally, she’s worked there for about 17 years. And she’s just — she’s basically like the mom of the kitchen. It would definitely be a lot more hectic if she wasn’t here because if we ever have any questions you can always go to Sally and she’ll know everything.

Don’t ask me about the future. Not yet. I’m 19. And I’m like, Sally’s been here 17 years? And when I look down the road, I do sometimes wonder if this is going to be my career. Am I going to be the kitchen mom? I would — I wouldn’t mind it. I would hope not. I have better — I don’t want to say better, but I have different goals for myself. I am currently enrolled in college and my long-term dream is to be a detective. Maybe in the FBI. I have another backup plan, maybe computer science, but after that? Food has always — it’s always been my go-to. I’ve worked in food since I’ve had a job, so I don’t mind having this as a backup plan. It wouldn’t be a bad place to be in 17 years.

The IKEA Kitchen Worker Who Can Deal With Angry Customers