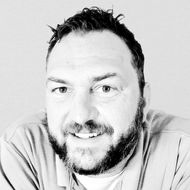 I’ve been with Northrop Grumman in the global supply chain for almost five years now. They’re a huge company. They’re one of the top five defense contractors, I believe.

I’m a senior buyer, basically. Just a basic nuts-and-bolts guy. That’s bolts, fasteners, connectors — very basic things. I’m not in any of the black projects or anything like that.

My plane, the B-2 Spirit, we’ve only got 20 of them. We’re called the Sustainment Program. We’re basically just making sure these planes stay in the air.

These planes were produced in 1987 to 2000, so they’re very old. There are thousands of nuts and bolts for just this one airplane. Everything we get has to be mil-spec — military specification. And there are only a few manufacturers that meet those specifications.

Because we’re buying for the government, every supplier and every order has to be approved through our corporate prior-approval process. There’s a bunch of red tape just to buy a paper clip. I can’t tell you how much red tape there is to just push the button to buy something. It’s not like you can just go online to Amazon and buy something. You have to justify it from the bottom up. I mean, it’s just ridiculous how much work has to be put in for one purchase.

The red tape started back years ago, when there was an absurdly expensive toilet that was purchased. It got in the news, and it was kind of a famous example of government waste. And I mean, it makes sense. Say I go and buy a $5,000 toilet. As a taxpayer, you’re gonna be freakin’ pissed off because I didn’t go to Lowe’s and buy it for $20, right?

That’s when they started clamping down on government procurement. There are all these policies and procedures in place. We have to keep the paperwork on each aspect of the process, and you’ve just got to document the crap out of it. I have to keep the physical files and I mean, they’re thick files.

Once you get over like $150,000 dollars, you’re gonna spend three or four days just putting the package together. And then we have to send it through compliance. Compliance checks to make sure that we did our job and everything looks right. And it could be another week or two before we get it back.

There are so many people who want that government contract, so it has to be fair and has to be spelled out where it’s obvious that that was the right company to go to. If a supplier comes back and says, “Hey, that should’ve been us!” then we go back and look at the paperwork and all the work that I did, and how compliance checked it and gave their green light for this contract.

I’ll tell you right now: I love compliance because it covers my ass! I have a very good relationship with my suppliers. I don’t just look for one supplier and continually award them contracts. I go out; I spread the love. I want everybody to have a fair chance to bid on this stuff. So when compliance says, “Yes, this looks good,” then I know that I did my due diligence.

Our shop is very small. We sit in the shadow of Boeing, right outside of Tinker Air Force Base. I think we have 300 or 400 people in our location, for different programs. It’s a very dynamic workplace. Everybody’s working together, talking together. It’s very loud. Sometimes it’s like a stock market, like the trading floor! A lot of people wear headphones.

We’ve got a person who does contract laboring and services; we’ve got people who do just the repairs and things of that nature. We don’t really deal with the engine work. The planes aren’t anywhere near us. They’re actually in Missouri and California. I’ve seen one fly over once, but that’s it.

I think the reason for all that specialization is so we get to know what we’re dealing with. We become subject-matter experts on what we’re buying, and we build a relationship with the suppliers that we’re talking to every day.

My co-workers are mostly retired Air Force. They know exactly what each part is. And my boss has been doing it for, I don’t know, 60 years. Things pass through so many different hands before they get to me, and somebody’s gonna catch it if there is a mistake. So there’s never been a situation where I’ve bought the wrong part.

I used to work for General Dynamics when I lived in Virginia, and my boss was the most abusive boss I’ve ever worked for in my entire life. I mean, he would throw stuff at us, cuss at us. He was horrible. My boss now, he’s a mentor to me. He’s very supportive. He’ll come up to me and he’ll say, “How are you doing?” I’m like, “Uh, I got this part on order … I’ve got …” And he’s like, “No, personally, how’s your life at home doing?” I think that’s pretty cool.

If there is a plane that can’t take off because it needs a part, and I have to find that part, it’s very stressful, because they can be hard to find. I’m hoping that somebody has stock somewhere, and if they don’t, then I have to basically go back and tell my boss, “Hey, we’re not gonna get this for 12 to 23 weeks.” That’s just a killer.

The problem is, we’re only buying two or three parts. These big manufacturers have got huge customers like Boeing and Lockheed doing a run of 5,000 at a time. So when we come and say, “Hey, we need three parts,” they’re like, “Eh …” They put us at the end of the line. So it’s very difficult to speed it up.

I don’t have a degree, so I feel very lucky to be where I am. I’ve got friends who are unemployed. Here in Oklahoma, it’s all about oil and gas. It’s so cyclical. Every five years, it’s up and down. I’ve got a ton of friends who lost their jobs in the last downturn. They thought they were set. And they wake up in the morning and they’ve got to go out and sell themselves to strangers.

I feel like my job here is pretty stable. This Sustainment Program is gonna be around for a long time, and we need the B-2 bomber. And then Northrop Grumman just won the contract for the next-generation bomber.

The new president, or the new administration I should say, is obviously pro-war [laughs]. So I’m gonna be good for a while. I’m not necessarily Republican or Democrat, but if we have a Republican in the White House, personally, I think that it’s good for the military, and it’s good for the business that I’m in.

The Defense Contractor Who Knows Trump Is Good for Business