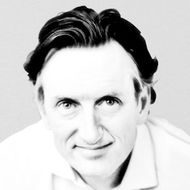 I came to this industry very late. I started medical school in my early 30s. I wanted to be a professional bicycle racer. I eked out a very meager living as an amateur rider for several years. I got tired of seeing Mr. [Lance] Armstrong’s backside get smaller and smaller and smaller and realized that just eating pasta wasn’t gonna do it.

So, I came to medicine with an athlete’s interest in the body. But by the time I started my internal-medicine residency, I was really disillusioned. Medicine was not anything like I had expected it to be. It’s all about a diagnosis. It’s about an entity that we do things to, not a person that we do things for and with. It was anything but altruistic.

I had a good friend and a mentor. He asked me: “What do you enjoy about medicine?”I said, “Well, I really like the communication and I like developing intimate relationships with patients and families who are dealing with big-ticket items.” He chuckled because that is exactly the stuff most residents dislike.

Palliative care, my speciality, involves working with people who have severe ailments. They are the sickest of the sick. My role is twofold. I have to put together the puzzle in real time to understand and map out the usual course of a patient’s disease, while coordinating care among different physicians and managing their symptoms, both physical and nonphysical. There’s 50 percent that’s physical and 50 percent that’s emotional and spiritual. We need to nurture both halves so patients can feel like a whole person regardless of what they’re dealing with.

It’s certainly not a rock and roll lifestyle. It’s pretty close to the bottom tier of what you can make as a physician. Having said that, physicians are still among the top 5 percent of earners on the globe. I’m not complaining. The real value for me is connecting to a broader sense of the human condition than my own.

I completed my studies at Stanford. Being from the Midwest, I had an opportunity to come back and head a palliative-medicine program here and so I did that for a couple years. Then an affiliate of the health system I was working for was accepted into a new Medicare initiative. This initiative basically said, “Okay, if you can design a care paradigm that meets the needs of the most ill and costliest population, we will support it through this innovative project with Medicare and Medicaid.” So I transitioned from the flagship hospital to that affiliate.

I saw patients in the hospital. I would go to their homes. I had a clinic they could come to, I would see them in long-term care facilities. Anywhere there was someone in need, we made sure they had access to us 24 hours a day. It was — as best as possible — seamless.

It’s my job to understand what’s going on right now, and what brought that person to the hospital or clinic. For example, we know if you have widely metastatic pancreatic cancer, your life expectancy is remarkably limited. There’s not much we can do to prevent that from being a terminal illness. But help me understand where you’ve come from the last two months, two years; what has this journey been like? Let’s talk about how you want to live rather than be very dictatorial and say, “This is what you need to do; this is what we need to do.”

I had a gal, newly diagnosed with widely metastatic lung cancer. We’ll just say her name is Sarah. An oncologist would say to her, “there’s nothing else I can do for you.” I cringe at that because we can always care and there’s always things we can do with her and for her. We can celebrate her life and learn and love and laugh and grow and manage her symptoms.

In my practice, I give every patient my personal mobile number. I get a call in the middle of the night from Sarah. I could hear her husband snoring in the background. I asked, “Are you okay?”

“Well, yes and no,” she said. “You know, it’s those wee hours of the morning where we feel very alone and the uncertainty and the ambiguity of life creeps up on us.” And she said, “I just – I just wanted someone with me in this space.”

We chatted. It wasn’t miraculous, it wasn’t a liver transplant, it wasn’t medicine, it was just recognizing the humanness of that moment. Then she goes, “Would you mind reading me a story?”

“Sure, that’s fine,” I said, “but you get your choice of Dr. Seuss or Curious George because those are the only books I’ve got laying around.”

It goes well beyond science. What frustrates me is, as providers, we’ve lost our humanness and we cease to live when we forget about the human.

I was on a board of a larger health system and in four years of meetings I didn’t hear the word “patient” once. The system is an economic entity — we’re guaranteed payment if we do things to someone. It’s about numbers. It’s not about truth, it’s not about honesty, it’s not about quality.

Because patients are not part of the conversation, you’re never going move toward true patient-centric care. What’s lost is true, informed consent. They are just objects that have things done to them. And in the backdrop of fee-for-service, doctors only get paid to do things. It’s a fraught paradigm.

I had an actively dying patient who had recurrent breast cancer. Her son had come from out of state to care for her at her home. She had some pain in the middle of the night, and her son did what any son would do: He got scared and he called 9-1-1. There’s nothing wrong with that. She came to the emergency department and because she had chest pain, they called cardiology. She had a history, years and years ago, of cardiac issues. The cardiologist came in, and — discounting the fact she’s got a widely metastatic cancer — he asks, “Do you want to die?” Nobody, nobody says “yes.” So she gets taken for a procedure to have her heart checked.

I came in the next day and I’m like, “It’s the wrong question. She is already dying.” The question really is, “How do you want to live?” The cardiologist was arguing with me that she rescinded her ability to die naturally when she agreed to have the procedure. I said, “Even if she did, she can still change her mind.” Finally he threw his arms up and called me a euthanizer.

The patient, she said, “Look, I wanna just go home.” She died the next day, comfortably, in her house. But only after all these procedures had cost hundreds of thousands of dollars. And the true expense was it put her into respiratory failure. She was in the critical-care unit, moments away from being intubated — where they hook you up to mechanical ventilation — which is not what she wanted. This needless rigamarole happens every day. Every day across the country, in every system.

I’ve been called a lot of things. There’s a lot of four-letter words — and primarily by physicians. But so be it. I stand beside my patients. It’s not that I don’t think they should or shouldn’t have chemo. I support as aggressive a treatment as they want. But what I am for is truth, I’m for informed consent, and when I — when you stand for something I guess you’re always gonna be more successful than when you stand against it.

The Doctor Who Wants to Change How You Think About Dying