The streets of Gay Village are strung with pink bulbs for an annual art exhibit (they’ve also been rainbow in the past). Photo: Roberto Machado Noa/LightRocket via Getty Images

At 376 years old, the onetime Colonial French fur-trade town has morphed into a cosmopolitan city with classic European sensibilities — and it’s only an hourlong flight from New York.

Along the old port of the St. Lawrence River, drop your bags inside the new William Gray (from $189) in a slick, eight-story glass tower atop two restored 18th-century houses. Inside, the 127 rooms are outfitted with local art, concrete ceilings, rich woods, and black-metal light fixtures; bathrooms are stocked with Frette towels and ample Le Labo amenities. Early evening, folks gather in the lobby’s warm “living room” for a game of pool, sip punchy coffee at Café Olimpico, and huddle on the rooftop, with slamming views of Place Jacques-Cartier, for drinks. 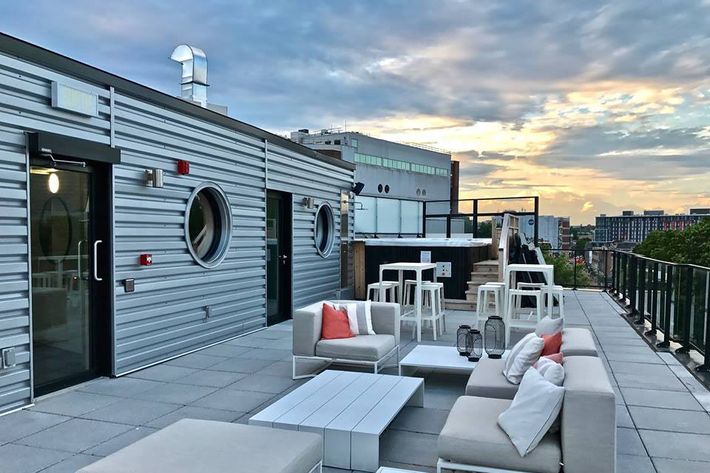 Billed as a DIY getaway (there are self-serve check-in kiosks in the lobby), Boxotel, a 20-studio venue, feels like the love child of an Airbnb and a sleek industrial hotel. Boxy minimalist wood-and-concrete rooms (from $125) showcase exposed pipes, plywood, cheery art, modular furniture, and a kitchen with handmade pottery. At night, Murphy beds fold down, and there’s an in-room washer and dryer. Those looking for more space should book the two-story studio with a rooftop terrace ($230).

Montreal has long been a meaty city, but a number of vegetable-focused restaurants are taking hold — attracting even the most devoted carnivores.

In Little Burgundy, a few doors away from the coveted institution Joe Beef, the narrow, wooden, whitewashed Le Vin Papillon (no reservations) writes its changing menu on chalkboards and features a bang-up wine list. The small plates have including items like seven-layer veggie dip, tempura-fried ramps, rotisserie cauliflower, and black-currant soft serve.

Inside a former Sunday school, Candide (named for Voltaire’s book) shuttles high-end vegetables from its open kitchen to the wood tables that mark its spare rustic décor. Chef John Winter Russell’s seasonal tasting menu has included culinary root-veggie delights like Boletus mushrooms, carrots, and garlic and a trio of squash, onion, and sweet habanero alongside a strong wine program. For dessert, there might be a cheese course or apples with ginger and maple.

A mix of new and old-school bars with tiki and Kremlin vibes.

Arcade Fire fans unite. In Gay Village, at the bilevel Agrikol (named for the French Caribbean rum), order a Ti’Punch (Haitian rum, lime, and fresh cane syrup) and let your winter woes melt away. If it’s dancing you seek, the venue’s sibling Ti Agrikol features a lineup of stellar DJs (including many from the popular Moonshine-collective parties). And, come gentler weather, the backyard houses a beachy café and lush terrace.

With a great (and reasonably priced) French and Italian wine list, the low-ceilinged, wood-paneled Norah Gray is a cozy spot for a drink, like the zesty All Spruced Up, mixed with rye, Citron, spruce syrup, and Angostura bitters. Snack on dishes like crostini with rapini pesto, house-cured ham, and grilled figs. 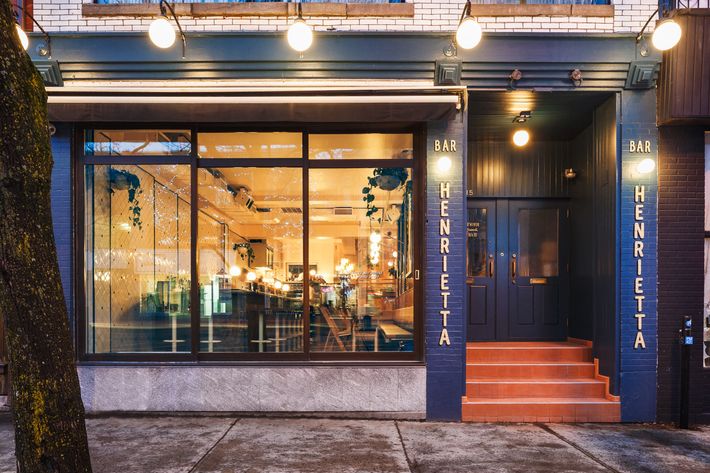 From Bernadette Houde, co-owner of Alexandraplatz, a seasonal beer garden in Marconi-Alexandra, and the small, decade-old lunch counter Dépanneur le Pick Up.

An adorable pastry shop on Laurier, Patisserie Rhubarbe, serves the most perfect lemon pie and delicious little pots of panna cotta with a caramel sauce, or even granola, if you want that “healthy” feel.

A new art space in Marconi-Alexandra called Centre Never Apart has a wide range of programming from visual art to sound baths. Watch out for the Legend series, which shines light on important queer artists from Canada and beyond. 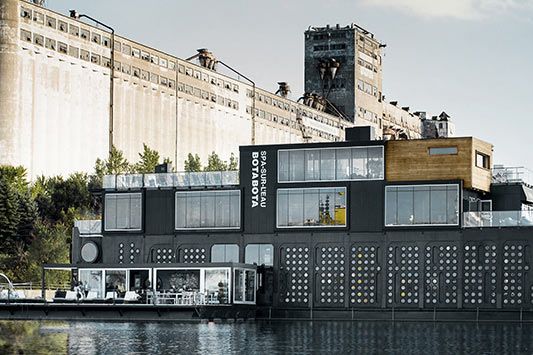 In the old port, the Nordic spa Bota Bota is literally on a boat. It’s a sure thing any time of year, but I particularly love it in the dead of winter. You can sit outside on the upper deck in the hot tub in a bikini in the middle of the St. Laurent. It feels amazing, and the view is spectacular.

For contemporary Vietnamese food on St. Laurent, Caféden has perfect chicken wings (I recommend the split plate), and the green-papaya salad is fresh and satisfying. There’s a great wine list and some fun cocktails.

Keep your ear to the ground to see if the ad hoc collective Taking What We Need is putting on any events raising funds for trans-feminine women in Montreal. It could be comedy, it could be a dance party, but it’s always a good time for an excellent cause.

A bit of a trek, but it’s worth it: Le Coq de l’Est (about a 30-minute drive from downtown) combines rotisserie chicken and Pakistani flavors to amazing results. Go for the tandoori chicken and poutine for something that feels like classic Quebeçois fare, but even better.

Drawn and Quarterly is a book publisher and shop in Mile End. They have all the books you need, stuff for kids, the most amazing birthday cards, and they host readings all the time. The best.

Montreal Is a Cosmopolitan City With a Classic-Euro Feel
heirs 5 mins ago
Paris Hilton Reportedly Pregnant With an Heir of Her Own The socialite and reality star had been pursuing IVF with fiancé Carter Reum.
covid-19 13 mins ago
CDC: Vaccinated Should Wear Masks Again in Many Cases A dramatic shift in just two months as the Delta variant surges.
trailer mix 15 mins ago
Paul Schrader Takes Break From Facebook to Write and Direct The Card Counter We’re doubling down on Oscar Isaac and Tiffany Haddish.
games 26 mins ago
The Superhumanity of Simone Biles No one has been under more pressure at these Olympic Games, and no one could have handled it better than she did.
2021 olympics 26 mins ago
Simone Biles Exits Olympic Team Gymnastics Final, Citing Mental Health The star gymnast said she was physically uninjured but “not there” mentally. Team USA went on to win silver, with Russia taking gold.
respect the classics 12:10 p.m.
Man, the New York City Homecoming Concert Is a Hot One Santana, the guy from Matchbox 20 … and other musicians … will be there.
trailer mix 12:05 p.m.
The Lamb Trailer Looks Less Cute Than It Sounds Featuring one of the most discomfiting uses of a Beach Boys needle drop in film.
ask a boss 12:00 p.m.
‘I’m Worried Going Back to the Office Will Mean More Work’ And more concerns about the transition to working in person.
reopening 11:44 a.m.
Should Unvaccinated People Avoid Restaurants Completely? The available evidence suggests it would be a good idea.
deal of the day 11:37 a.m.
This On-Sale L.L.Bean Insulated Tote Is Perfect for Beach Days and Beyond The insulated (and probably more practical) version of L.L.Bean’s Boat and Tote is on sale at Nordstrom.
vulture sports 11:25 a.m.
Julian Casablancas Threw Out the Mets’ First Pitch Last Nite Good form, better fit.
covi-19 vaccines 11:24 a.m.
Marjorie Taylor Greene Compares COVID Vaccine Requirements to ‘Segregation’ The good news is that MTG has stopped using Holocaust analogies to attack anti-COVID measures. The bad news: She’s found another offensive analogy.
covers 11:22 a.m.
BTS Hits Those Faith Evans High Notes in the BBC Live Lounge Covering “I’ll Be Missing You,” by Evans, Diddy, and Sting.
tokyo olympics 11:21 a.m.
Simone Biles Isn’t Sure If She’ll Compete Again in Tokyo The star gymnast said she’s taking things one day at a time after withdrawing from the team competition for mental-health reasons.
book excerpt 11:11 a.m.
Closer to Perfect “I wish someone had said something like, “Don’t change one damn thing about yourself.”
tokyo olympics 2021 10:45 a.m.
A Day-by-Day Schedule of the 2021 Tokyo Olympics Let the games begin …
movie review 10:39 a.m.
The Green Knight Is a Ravishing, Unsettling Fantasy In David Lowery’s new A24 movie, Dev Patel is a gadabout in search of a legend to call his own.
By Alison Willmore
sports! 10:36 a.m.
The Best Things We’ve Seen at the Olympics So Far A swim coach horny for gold, teens shredding the skateboarding category, and more.
dc 10:32 a.m.
Winston Duke Will Play Bruce Wayne (Cool!) in a Podcast (Oh …) Batman Unburied is written by The Dark Knight screenwriter David S. Goyer.
trailer mix 10:17 a.m.
Ghostbusters: Afterlife Lives On, Sets November Release Finn Wolfhard and Mckenna Grace dust off the ghost traps and fix up the Ectomobile.