It’s a bad week for the experts. Political pundits and election forecasters failed monumentally to predict Trump’s win. (Mostly because everyone refused to listen to Glenn Greenwald on the lessons of Brexit, according to Glenn Greenwald). But that isn’t to say the political, social, and economic dynamics that pushed Trump to victory haven’t been laid out for some time. Indeed, as far back as 1994, a handful of scholars predicted that the economic dislocations of white America in a globalized, high-tech economy could give rise to a demagogue. They explained how Establishment political parties were failing to meet citizen’s needs, and the ways in which the rural/urban divide could be exploited. They saw the social fault lines that ruptured this election laying in wait for decades.

Here’s philosopher Richard Rorty in his 1998 book, Achieving Our Country: 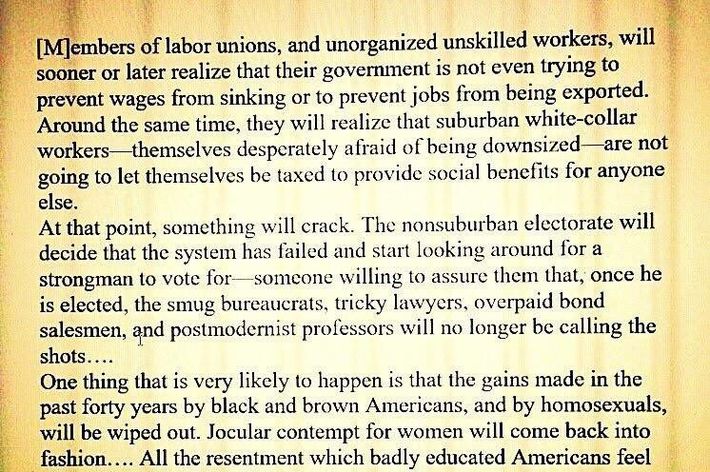 Which is actually a paraphrase expanding on an argument made by military strategist and political scientist Edward Luttwak, who laid out a number of these now familiar themes in a 1994 article in the London Review of Books titled “Why Fascism is the Wave of the Future.”

Neither the moderate Right nor the moderate Left even recognizes, let alone offers any solution for, the central problem of our days: the completely unprecedented personal economic insecurity of working people, from industrial workers and white-collar clerks to medium-high managers … And that is the space that remains wide open for a product-improved Fascist party, dedicated to the enhancement of the personal economic security of the broad masses of (mainly) white-collar working people … It is not necessary to know how to spell Gemeinschaft and Gesellschaft to recognise the Fascist predisposition engendered by today’s turbocharged capitalism.

(Luttwak, for the record, doesn’t see Trump as the culmination of his argument, and has called for conservatives to get over their fears of the Donald.)

In 2004, the conservative historian Samuel Huntington described the urban versus rural cultural rift that Trump exploited on his path to victory.

The views of the general public on issues of national identity differ significantly from those of many elites. The public, overall, is concerned with physical security but also with societal security, which involves the sustainability — within acceptable conditions for evolution — of existing patterns of language, culture, association, religion, and national identity. For many elites, these concerns are secondary to participating in the global economy, supporting international trade and migration, strengthening international institutions, promoting American values abroad, and encouraging minority identities and cultures at home. The central distinction between the public and elites is not isolationism versus internationalism, but nationalism versus cosmopolitanism.

And in 2010, leftist intellectual Noam Chomsky described the potential for a demagogue to blame minorities in an interview with Truthdig:

If somebody comes along who is charismatic and honest this country is in real trouble because of the frustration, disillusionment, the justified anger and the absence of any coherent response. What are people supposed to think if someone says ‘I have got an answer, we have an enemy’? There it was the Jews. Here it will be the illegal immigrants and the blacks. We will be told that white males are a persecuted minority. We will be told we have to defend ourselves and the honor of the nation. Military force will be exalted. People will be beaten up. This could become an overwhelming force. And if it happens it will be more dangerous than Germany. The United States is the world power. Germany was powerful but had more powerful antagonists. I don’t think all this is very far away. If the polls are accurate it is not the Republicans but the right-wing Republicans, the crazed Republicans, who will sweep the next election.

These Scholars Predicted Globilization Would Lead to Trump