90 Books Every Comedy Fan Should Read

By Brian Boone and Jenny Nelson 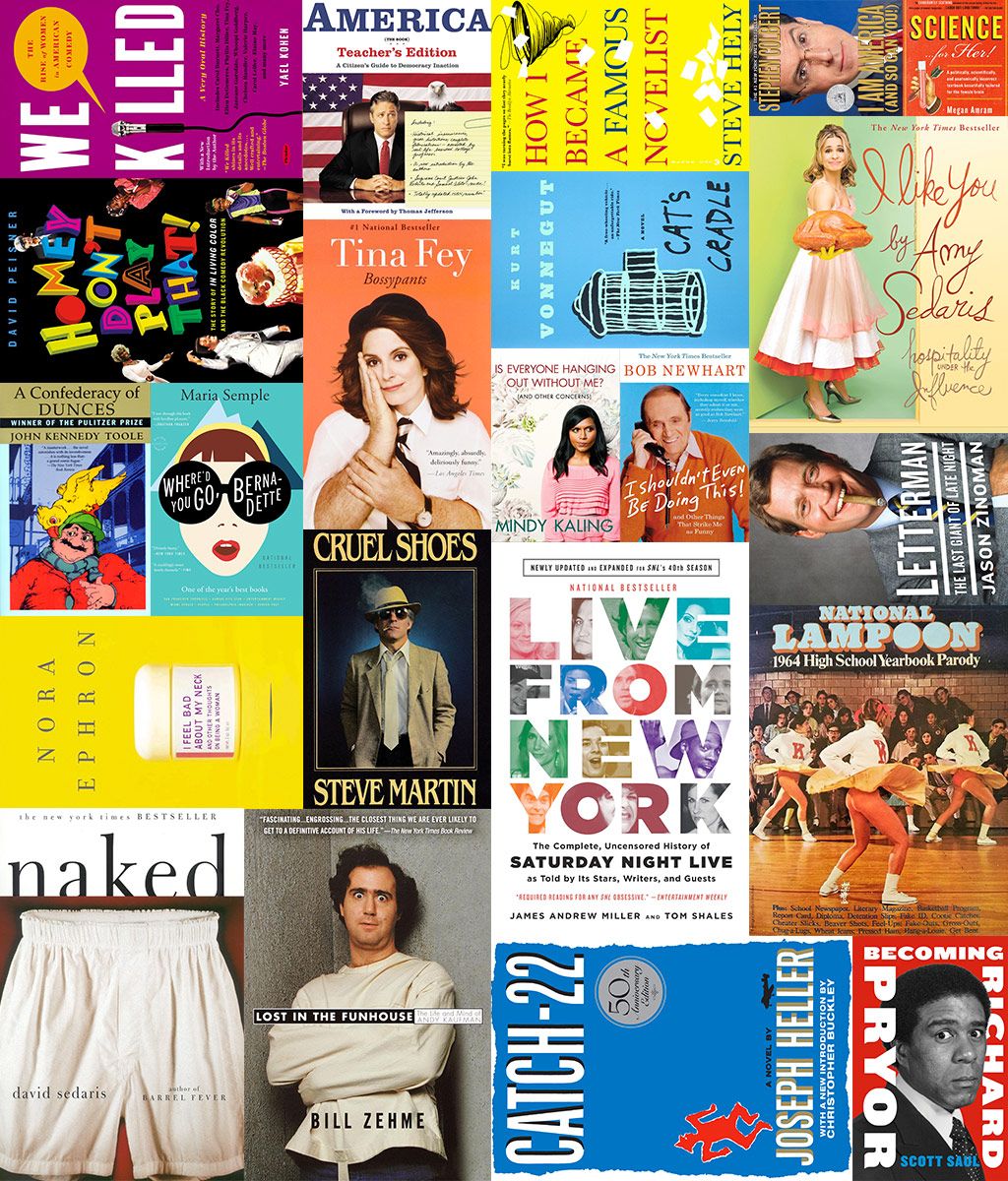 Hey, it’s books! Books have a lot going for them. They make you look smart when you read them, people leave you alone if you’re reading one in public, they’re cheaper than movies, and they’re really just a whole bunch of tweets strung together.

Books are very important to comedy, and historically they’ve been the one medium that takes comedy as importantly as it should be taken, in terms of its history, execution, theory, and practice. Here then are 90 comedy and comedy-related titles — memoirs, fiction, essay collections, interviews, TV tie-ins, and more — that a student of comedy’s library simply must include.

A Heartbreaking Work of Staggering Genius by Dave Eggers (2000)
Eggers is a fairly important individual in humor and letters, what with founding McSweeney’s and becoming a successful novelist. His first book, however, was this hilarious sort-of memoir, or rather autobiographical novel. After detailing life as a young gadabout forced to grow up fast when a tragedy leads to him raising his brother, we get back into the funny, massaged adventures of the go-for-broke Eggers, such as how he runs the much-missed magazine Might and unsuccessfully auditions for The Real World.

﻿Based on a True Story by Norm Macdonald (2016)
Comedians and comedy nerds love Norm, but why? It might be because he sarcastically and boldly ignores the rules, like regular joke rhythms or not being polite — he once told actress on Late Night that her terrible movie was terrible. As such, Norm takes his own approach to the stand-up memoir, turning it into something that’s painfully true and also preposterously not true, but delivered with Norm’s familiar deadpan. It keeps you guessing, like, did he really bring out morphine and a syringe during his SNL audition?

Born Standing Up by Steve Martin (2007)
Including all entertainment memoirs, not just comedy people, is Steve Martin’s, and not just because of Martin’s unsurprisingly beautiful prose. Unlike most memoirs, it seems to convey a clear-eyed honesty, as Martin seeks to de-mythologize his own life, one that the rest of us have so mythologized, specifically his days in the 1970s when he was a stadium-filling stand-up comedian. (He even calls it a biography, and not an autobiography, because he’s “writing about someone I used to know.”) He’s so honest with himself and the reader that when he explains why it is he quit comedy to pursue acting, art, and writing, the reader understands.

Bossypants by Tina Fey (2011)
You can’t be Tina Fey, but you can get close to understanding what it is like to be Tina Fey, whose rise seems both hard and easy, probably because she is Tina Fey and equipped with the life, managerial, and comedic skill to do so and make it look easy (or at least make hard work look fun). Constantly interrupting herself with jokey but relevant life advice (“talent isn’t sexually transmitted”) and self-deprecating one-liners, Fey charts her rise from Pennsylvania nerd to Chicago improv comedian (and employee of the city’s creepiest YMCA), up through SNL, 30 Rock, and motherhood.

Daddy’s Boy by Chris Elliott (1989)
Elliott, the “Guy Under the Stairs” on Late Night with David Letterman, the thirtysomething paperboy on Get a Life, and the cabin boy in Cabin Boy, has written a few fake nonfiction titles, such as Into Hot Air, about his disastrous, not-real ascent of Mount Everest. But the innovative, meta-comedian wrote an actual, mostly truthful book with Daddy’s Boy, as the subject is too real — it’s about growing up and forging one’s own identity and voice in the wake of phenomenally successful parents in the same business. After all, he’s the son of Bob Elliott of the classic comedy duo Bob and Ray. It’s the rare book that’s also self-accountable, because after every chapter Chris Elliott delivers, Bob Elliott gets his own rebuttal chapter.

Forever, Erma by Erma Bombeck (1996)
For most of us, our comedy education all started with the same things: Sesame Street, whatever comedy albums our parents had lying around, and whatever funny books were on our parents’ bookshelves. For me, because my parents are old, that meant the complete works of Erma Bombeck, books with titles like If Life is a Bowl of Cherries, Why Am I Stuck in the Pits? and other now-tired aphorisms. But come on, if you want a complete and exhaustive comedy library, you have to include the greats that maybe didn’t age well, but which paved the way for today’s comedy section at the bookstore, which is essay collections of comedians, columnists, and, for some reason, YouTube stars. Bombeck did stand-up comedy on the page, most of it about how fed up she was with domestic life.

Girl Walks Into a Bar by Rachel Dratch (2012)
Girl Walks Into a Bar deals a lot with something that arts and entertainment books don’t touch on much — disappointment and the abrupt end of glory. For example, Dratch went from an epic run on SNL to being cast as Jenna on old scene partner Tina Fey’s 30 Rock, and was replaced after the pilot. Life doesn’t go where you think it’s going to go, which is another theme of this book, which ultimately becomes a sweet and lovely story about second chances and unexpected joy. (Dratch meets a guy and has an unplanned baby late in her child-bearing years.)

I Feel Bad About My Neck by Nora Ephron (2006)
Ephron was never not candid, never held back anything—any tragedy, indignity, embarrassment, or personal triumph was fodder for her many books, because “everything is copy,” as she reportedly said and clearly did. In addition to wonderful comedy scripts like When Harry Met Sally, My Blue Heaven, and Sleepless in Seattle, Ephron mined her private life for her books. In I Feel Bad About My Neck, one her last before her death in 2012, is about her own (but universal) experiences with aging, menopause, and empty nest syndrome, along with her favored topics of food and New York.

I See You Made an Effort by Annabelle Gerwich (2014)
A lot of comedian memoirs are about the past, and childhood; Gerwich chose to write about the less-than-perfect present, and the future. Gerwich has been hosting shows and acting in things for more than 20 years, and she also wrote this gritty, self-deprecating memoir of coming to terms with the specter of middle age and all the crap that goes along with that. For example, she writes of having to buy far-too-expensive and probably not-effective anti-aging treatments, while also dealing with the assisted-suicide death of her best friend.

In God We Trust, All Others Pay Cash by Jean Shepherd (1966)
Radio host and humorist Jean Shepherd tended to exaggerate the tales of his childhood (as do most people), and the best ones are about Christmas in the heavily nostalgized mid-20th century. This collection was adapted into the perennial Christmas classic A Christmas Story, which Shepherd narrated. The movie lacks a lot of Shepherd’s biting sarcasm and cynicism, because this book does pine for the good old days while also pointing out how adults then, and now, are a bunch of phonies.

Is Everyone Hanging Out Without Me? by Mindy Kaling (2011)
Before she had her own shows and became a movie star, but after she wrote for and starred on The Office, Kaling published this, the first of two books of chatty, free-wheeling essays on her life and worldview. Among her topics are themes she’s explored elsewhere in her work, like the vagaries of friendship and romance, but this also finds her reflecting on fame, and how the truly right amount of fame is just enough to get oneself acquitted of murder.