5 items in this article

Everyone knows that person who spends weeks sniffing around travel blogs, going deep down into TripAdvisor rabbit holes, collecting Google docs from friends of friends, and creating A Beautiful Mind–style spreadsheets to come up with the best vacations and itineraries possible. In this recurring series, we find those people who’ve done all the work for you, and have them walk us through a particularly wonderful, especially well-thought-out vacation they took, that you can actually steal.

When a good friend in the fashion industry was forced to cancel his 2020 birthday celebration in Santa Teresa, Costa Rica, due to COVID-19 restrictions, Rhianna Rule — the photo director at large at More or Less Magazine and the image director for Christy Dawn — had exactly one year to rebook her trip before losing her deposit. She took a risk in thinking the world would start to reopen in the spring of 2021, and she’s glad she did: This past April, she and her family made their fifth trip to the laid-back surf town on the Nicoya Peninsula on the Pacific Coast of Costa Rica. Here, she shares her favorite waterfront restaurants, nonobvious beaches, and the light and airy dresses she made sure to pack.

Book a villa in the middle of the jungle

We first stumbled upon Santa Teresa while traveling around Costa Rica on our honeymoon in 2010. It’s a very natural, unmanicured stretch of sand along the Pacific Ocean. We stay in Playa Hermosa, which is at the north end of the strip; it’s perfect if you have kids or want nice accommodations and chill vibes. Book a beach villa through Batik Costa Rica, a really nice hotel. Ask for Rayo Verde (from $850), a home that’s not listed on its site but is one of its more special offerings in that it’s bigger than others and is set in the most beautiful jungle landscape; it fits ten people and has a pool, a yoga palapa, an outdoor shower, and a path right down to the beach. It’s so nice that if you don’t want to leave and cross paths with anyone, you really don’t have to.

If you’re coming from Los Angeles, take the red-eye on Delta that gets you into San Jose at six in the morning. From there, we take a 25-minute flight to Tambor through SANSA Airlines, which I call the Indiana Jones plane; it’s a 12-seater and is equal parts exciting and terrifying. For under $100 round-trip, it’s worth it because it’s so fast. There is a weight limit of 30 lbs for main luggage and 10 lbs for carry-ons per person, so don’t take too much (I learned this lesson the hard way): Pack a few short dresses and a pair of shoes you won’t be precious about, because they will get a bit wrecked. From Tambor Airport, catch a taxi to the villa; it’s about 45 minutes and costs about $70. If small planes or packing light isn’t your thing, you can also drive down and get a 70-minute ferry to cross the Gulf of Nicoya, but that can take six to seven hours door-to-door, depending on how many stops you make. (Driving the whole way takes even longer — forever!) Either way, you’ll need a rental car so you can take day trips across the peninsula or to Santa Teresa and Malpaís, which are all on the same 20-minute road. Make sure to rent a 4x4 — even though they just started paving the main road this year, the conditions aren’t great, especially if it rained the night prior — or an ATV. All the locals ride them while wearing bandanas and goggles because it’s really dusty, very Mad Max. 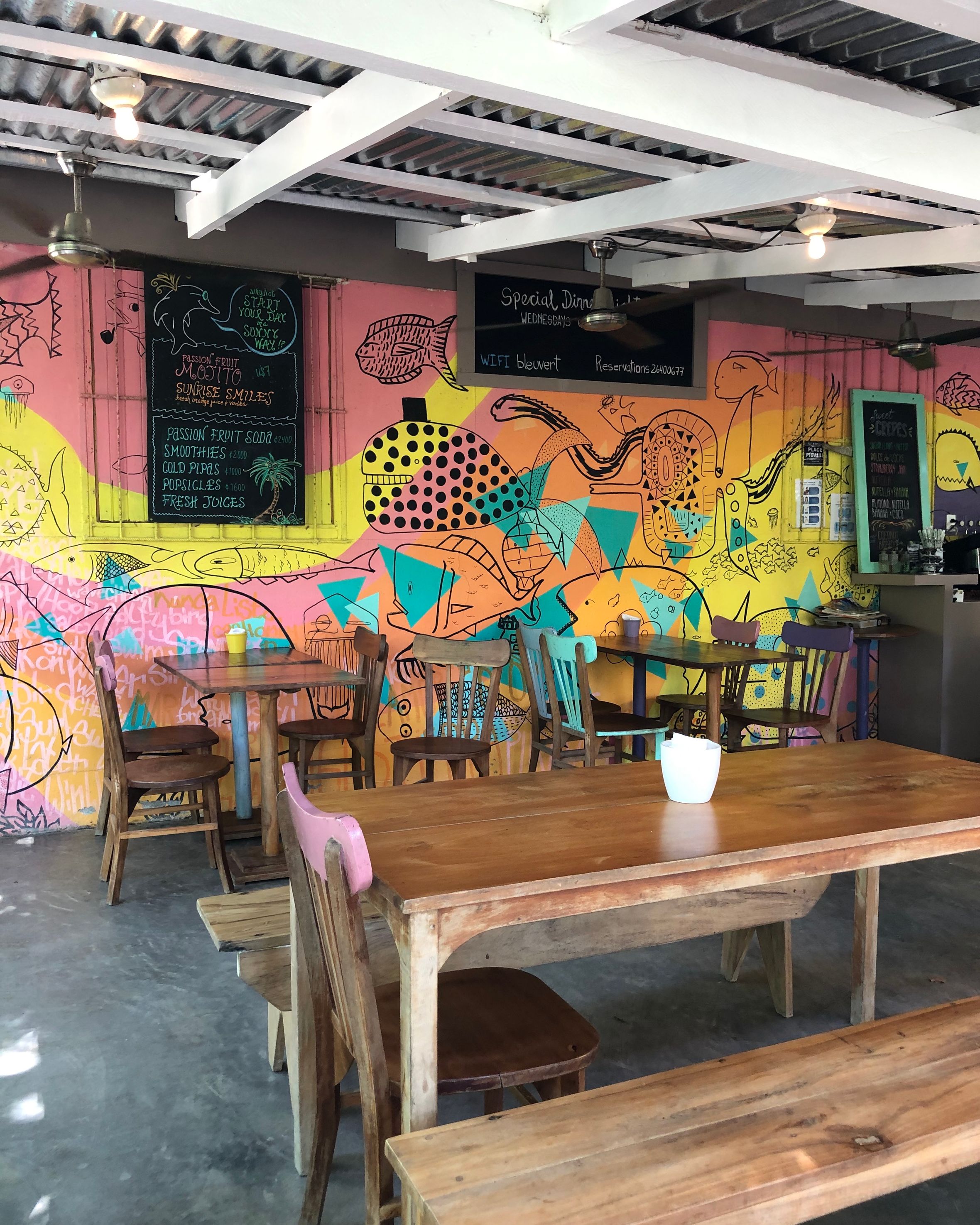 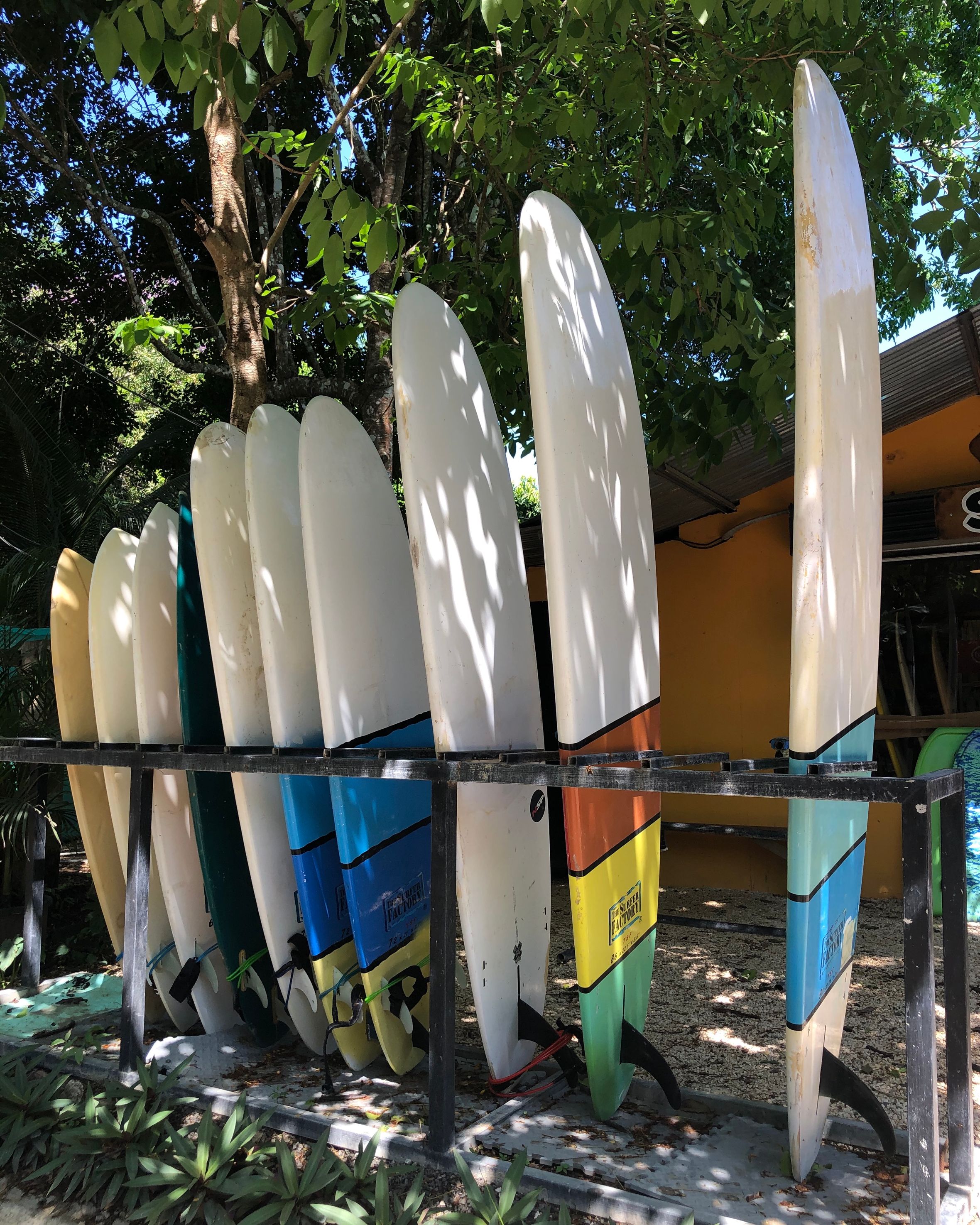 Once you reach town, around lunchtime, you’ll want to eat at Couleur Café (Playa Hermosa) up the street. I order a fresh green juice and the veggie sandwich because it’s simple and on panini that’s delicious. Relax around the house and drink beer by the infinity pool until your friends, who have decided to drive the whole way down from San Jose, arrive, likely around sunset. That’s when everyone goes to the beach for a surf. Get there around 4:30 p.m. and try to leave before 6:30, because it gets dark fast, and there will be hermit crabs and spiders everywhere.

I like to start my days at Pranamar (Villa Bonita Dr.), a nearby hotel on the beach that offers yoga classes (from $15) at 10 a.m. Then, I head to the supermarket Super Ronny’s #2 (Puntarenas Province) to stock up on fruit (pineapple, papaya, banana, melon) and basic ingredients to re-create the local dish, gallo pinto: white rice, black beans, avocado, scrambled eggs, and quesadillas. Meanwhile, my husband, because he can’t fit his longboard on the mini-plane, stops by the surf shop Jobbies Longboards (Puntarenas Province). To rent a decent board, it’s $20 per day; he rode a Robert August 7’6” on our last trip this past April. You can also rent boogie boards for the kids, although I just buy them at one of the local supermarkets because they’re so cheap. 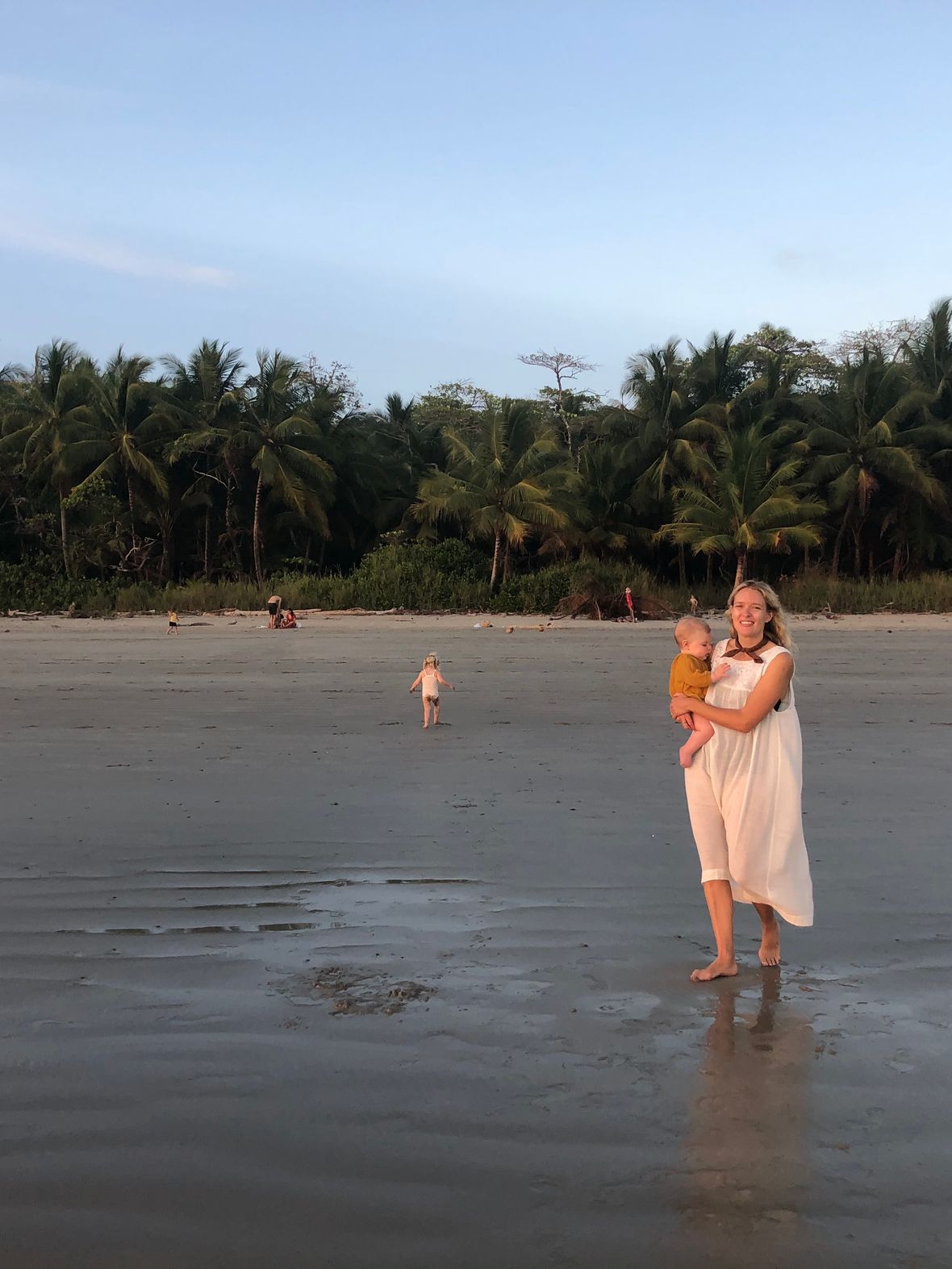 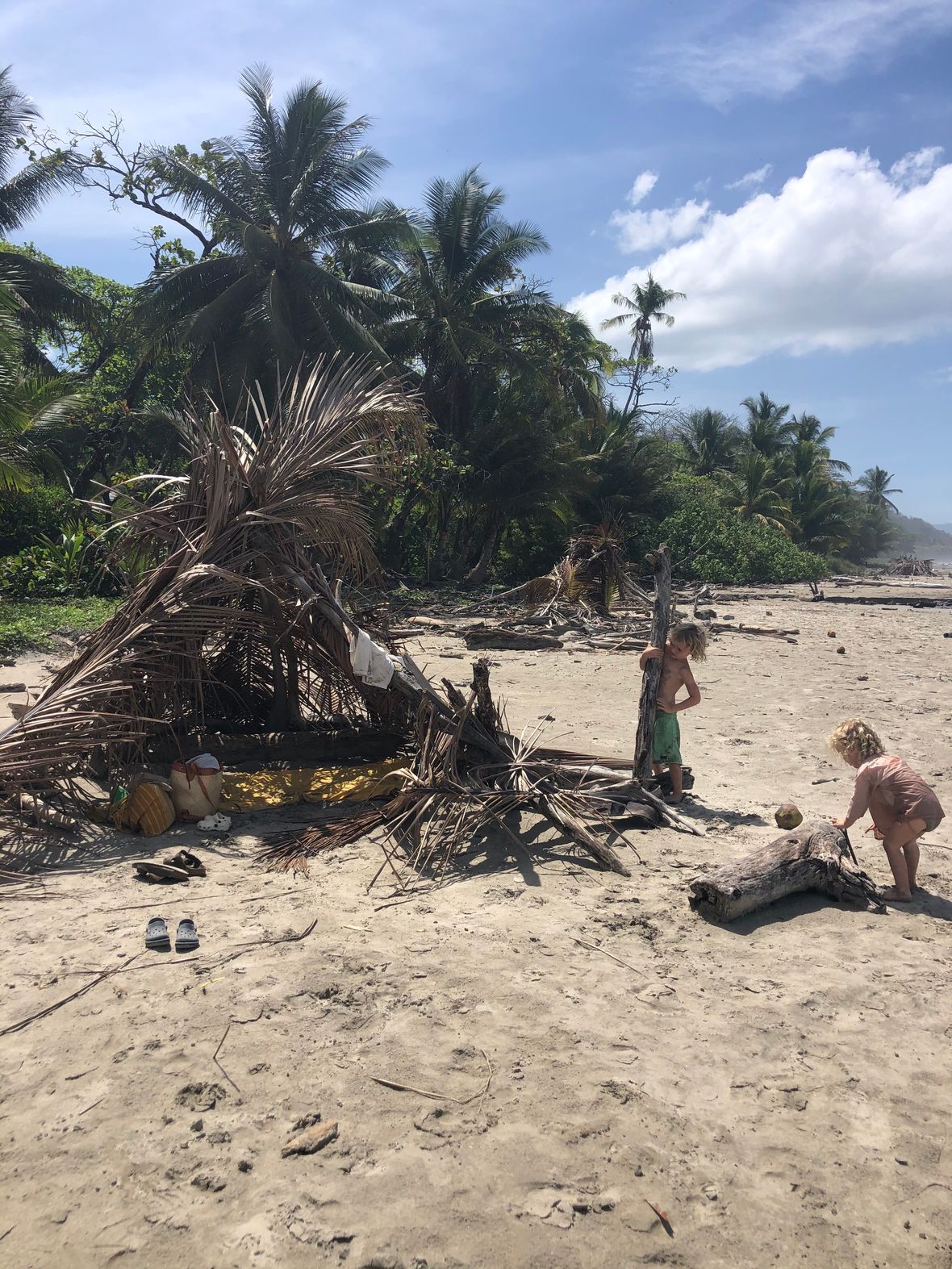 Then, we spend the day together at the beach, which is just down a little path from the house. It’s heavenly; Playa Hermosa is wide and the water is bath-temperature and calm. Don’t bother bringing a beach tent or umbrella; people build structures from palm trees. Your kids won’t need any of those plastic sand toys, either. There is so much fun stuff to play with, like fallen coconuts, sticks, and stones to make sandcastles. Dinner is at our friend Jim Kelly’s place called Rocamar (200 meters south of Flor Blanca Hotel), a really casual beach café. It’s all about the fish tacos and margaritas.

You’ll be happy to get some extra sleep in the morning, because the howling monkeys in the trees wake you up between 4 and 6 a.m. After recovering by the pool, drive down to Malpaís; it’s another beautiful natural beach. On your way back to Hermosa, there is a restaurant by this New York City chef called Koji’s (Calle Buenos Aires). The vegan tuna roll is really great. If you can pull it off, go without your kids — it’s known as one of the best places around.

Wake up early to lie and play in the lovely tide pools just north of Playa Hermosa; they are great at low tide, around 9 a.m. Get in the car and go to Santa Teresa, which is in the middle of the strip. It’s fun, and there’s loads of hot, single people — backpackers and surfers are all on bikes in bikinis, likely heading toward Selina, the surf beach. For lunch, just walk to Eat Street, a little area where there are lots of upscale food stands, or head to health-conscious spots like Ani and Earth Café. There are all these cute little boutiques around, too. I like to buy at least one long dress, and maybe a straw basket if mine falls apart by the time we land at the small clothing and jewelry boutique Pacific Wolf Factory. In pre-COVID times, there were always sunset bonfires at the beachfront restaurants in Santa Teresa, such as Banana Beach (Villa Bonita Drive) and Habanero (Hotel Playa Cielo). Not so much anymore. It’s still worth sticking around until 6 p.m. or so, when you head back to the house for dinner. Cook at home. Ask the hotel to get you something from the fish market, and they’ll set up their wood-fired BBQ. It’s kind of incredible.

1 p.m.: Drive your ATV over to Montezuma

On days when the surf is too big, you’ll want to take an excursion over to the other side of the peninsula, at Playa Los Cedros. It’s very secluded with all these little rock pools, a really pretty cove, and all these cool shells for collecting. Near there, in Montezuma — a little hippie town known for its beautiful waterfall, the Montezuma Falls — there is a lovely restaurant with a great view of the beach called Playa de los Artistas. It’ll be the best meal you’ll have the entire trip. The menu is handwritten every day and adapts to what is fresh and available. They have really good sharing dishes, like spicy hummus, and a good wine menu too, which isn’t easy to find. In the afternoon, drive your ATV down a road called Doghouse Shortcut Road straight into the jungle in Montezuma.

11 a.m.: Ride up the coast to Manzanilla

You’ll likely wake up wanting to ride your ATV again. We take it along the coastal road up to Manzanilla. It’s super-nice and feels really remote. Have lunch back in town, this time at Café Social or Nami, the latter of which has great sushi. I like to get in at least one sunset-yoga class, and Horizon (Calle Buenos Aires), which is on a hill and has beautiful views of the ocean, is my favorite place.

If you’re returning to L.A. or New York, you’re going to have to spend a night in San Jose either at the beginning or end of your trip, because of the ferry and flight times. We always do this at the end. Return your vehicles and book the latest mini-plane, and on your taxi ride up toward the airstrip in Tambor, say hi to friends with beach homes along the water. After catching the flight to San Jose, head straight to the Holiday Inn, which is one kilometer away from the airport. It has a pool in case you need to kill some time. Again, this trip is for the more intrepid party, one who prefers surf and waves and doesn’t mind the rough travel required to get there.