Sometimes when it’s on, I don’t even need air-conditioning. Photo: Courtesy of the Retailer

I have some nice things in my home: books pleasingly arranged on a shelf, some good art, a well-organized bar. If I’m telling the truth, though, nothing in my apartment brings me as much pleasure as the VFAN Vintage Air Circulator by Vornado that has, since its purchase (thanks, Dad!) in 2014, dazzled my guests and made me feel, with a turn of the switch, cool and glamorous on even the hottest, stickiest, smelliest New York summer days.

It helps that the fan, unlike the boxed versions you buy at Duane Reade at midnight, is entirely made of metal, which means it’s sturdy enough to withstand both regular cleaning and regular dragging around the house. It’s got a pleasing heft, and the blades and motor are shockingly powerful: I run hot, and sometimes when I’ve got the fan on I forget that I haven’t bothered to turn on the air-conditioning. Early ads for the fan, run by Vornado in the ’40s and ’50s, tout their unparalleled ability to make a fan that doesn’t sound annoying, and that’s still true: Mine sounds no louder than a white-noise machine, and in fact I often use it as such. 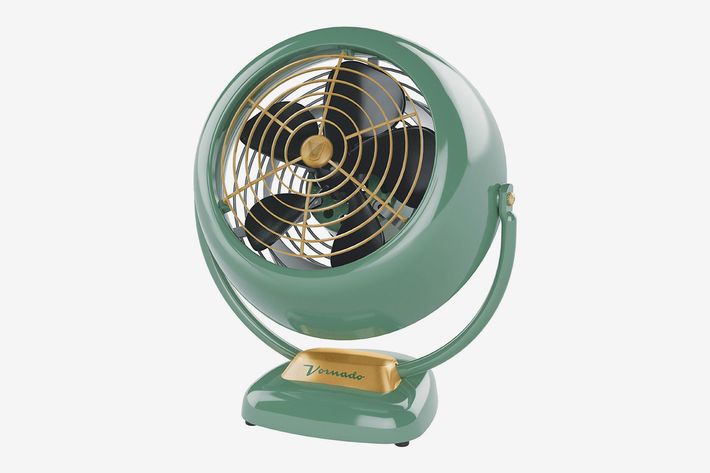 I have the soft-green version, a shade that recalls the fans Vornado was indeed making in the years after WWII, but just a touch more modern — less avocado and more washed-out teal. It also comes in chrome (if you love a space-age motif!), cream (classic), and red, which is what I think I’ll go for next — the high-gloss cherry would look great in a room full of Sottsass pieces, if you lean in that direction.

It also seems prudent to pause here and admit that the real reason I love the VFAN is because to look at it is to be transported into a version of the mid–20th century, where household objects doubled as décor. It’s actually impossible to look at it and not admire the attention to detail (the fact that the grate of the fan is gold or that the Vornado logo is rendered in a lovely scripted font). Owning the fan is like living in an episode of Mad Men — except not sad, because I have a beautiful fan and also a half-century’s worth of social progress to contemplate.

There’s also a slightly smaller version for $40 cheaper, too.

We went in search of the best non-hideous fan last year and found it in the Otto, whose frame, not too much bigger than a watermelon, is handcrafted into a circle over a 21-hour process.

For maximum airflow with minimal real estate, you can’t really beat a tower fan — this one by Lasko is beloved by many, many reviewers on Amazon.